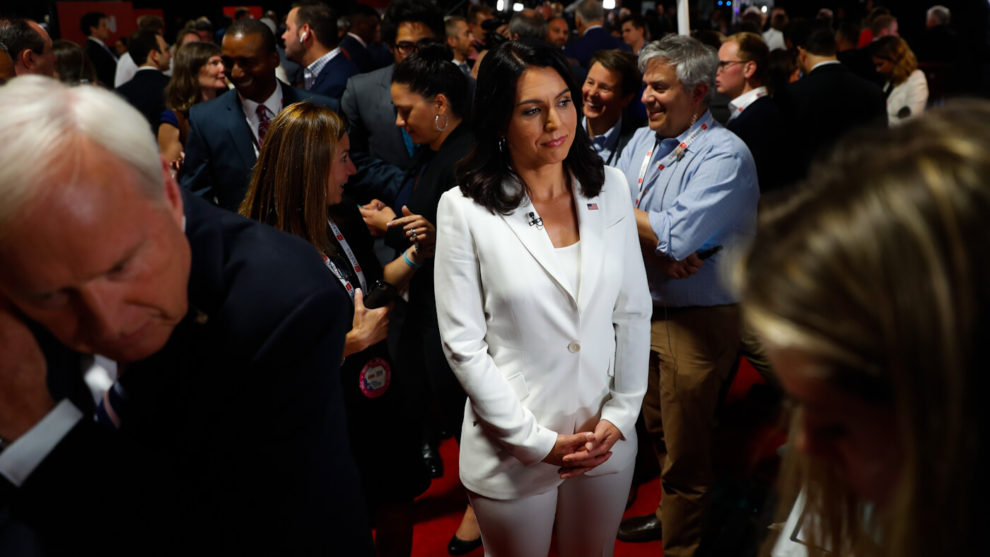 Harris failed to respond to Gabbard and, just as Rep. Tim Ryan (D-OH) did before her, she attacked Gabbard with the tired label of “Assad apologist,” referring to Gabbard’s questioning of the U.S. government narrative on the Syria chemical-weapons attacks as well as her attempts to foster dialogue with Syrian President Bashar al-Assad. Harris has also used the label in the same weaseling manner that Ryan has — when Gabbard was not present to counter it.

While proponents of U.S. foreign policy in Syria have used the label to smear Gabbard before, it was New York Times opinion writer Bari Weiss who arguably made famous the malign smear during an appearance on the Joe Rogan Show. When asked to explain what made Gabbard an Assad apologist, Weiss now infamously responded by calling her a “toady” of Assad. When confronted by Rogan, Weiss admitted she did not know what the term toady meant.

Just as Weiss failed to elaborate when confronted about her name-calling of Gabbard, Harris failed to respond to Tulsi’s pointed examination of Harris’ compromised record as a prosecutor. This record, as Gabbard noted, includes the prosecution of over 1,500 people for marijuana charges (the hypocrisy of which was highlighted when Harris laughed when asked if she had herself indulged); blocking evidence that would have freed an innocent man from death row until the courts forced her to do; keeping people in prison beyond their sentences, to be used as cheap labor; and fighting to keep the discriminatory cash bail system in place.

Harris also refused to prosecute Trump lackey, and current Treasury secretary, Steve Mnuchin for his unscrupulous use of home foreclosures for profit. As CNBC noted in January:

In 2012, the California Department of Justice found in an investigation that One West Bank participated in ‘widespread misconduct’ when foreclosing on homes, recommending that Harris file a civil enforcement action against the bank. However, Harris declined to prosecute One West or its then-CEO Steven Mnuchin, despite the department’s recommendation.”

So what was Harris’ response to Gabbard’s legitimate and very specific criticisms of her record? In a post-debate interview, CNN’s Anderson Cooper asks Gabbard to comment on a characterization of her he had just elicited from Harris off-camera, recounted by Cooper as: “The only thing she [Harris] said about you is that you are essentially an apologist for Assad.”

Cooper next repeatedly sought clarification from Gabbard as to whether she agreed with the mainstream media’s one-sided version of events in Syria. Not once, but over and over. Cooper came across as hypocritical for his arbitrary line of questioning regarding what leaders the United States could engage with. If our country can engage with Saudi despots who have dissenting journalists from the Washington Post brutally dismembered, what is his issue with Gabbard’s engagement with Assad? And, as Gabbard pointed out, if FDR could meet with, and even ally with, Josef Stalin — a man responsible for the death of millions — why shouldn’t Gabbard meet with Assad, or any other head of state, to prevent what she accurately refers to as “needless regime-change wars of intervention.”

What Gabbard has accomplished

For her blunt assessment of U.S. foreign policy, one that is arguably shared by a large portion of the American electorate, Gabbard is vilified or ignored by most in the mainstream media. Pundits have made careers of maligning anyone who dares go against the neoconservative gospel on foreign policy, and Gabbard, of course, is no exception. Even the late-night comedy shows avoided any significant mention of her compelling performance in their detailed summations of the second night’s debate — this despite the fact that she was the most Googled candidate during the debate.

Tulsi Gabbard has moved the Overton window on what is acceptable discussion when it comes to U.S. foreign policy. She has punctured the rose-tinted narrative being constructed around establishment favorites like Harris. This has not endeared her to mainstream pundits like Cooper of CNN or Brian Williams of CNBC. To understand her actual positions on the U.S. role in Syria, Kim Iverson’s interview with her exemplifies how mainstream pundits should be doing their jobs.

Ali A. Taj is Editor in Chief of Let us build Pakistan (LUBP), an alternative news and political platform that campaigns for the rights of all Pakistanis. Visit LUBP on Twitter and Facebook.