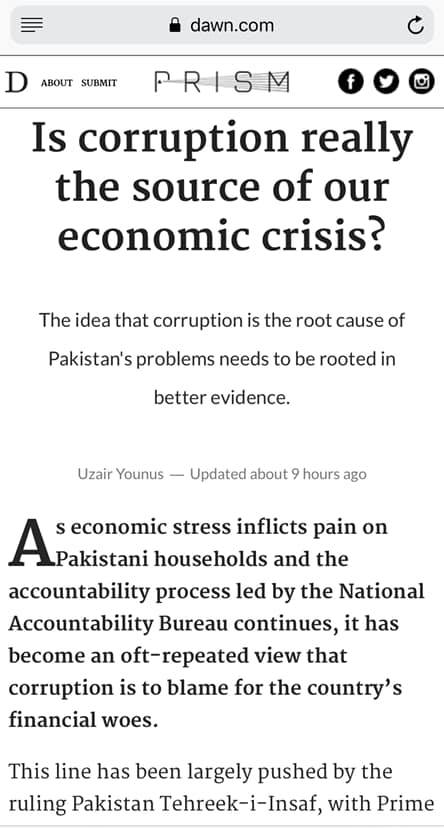 The corruption mantra in Pakistan has a history as old as the country itself. The founding scions of the DAWN corporate empire were themselves the alleged beneficiaries of corruption. DAWN has often taken the lead in vicious attacks against PPP by misusing the corruption mantra.

The most recent smut campaign by DAWN was when it reproduced, without qualification and with prejudice, the now fizzling allegations of NAB against the PPP leadership.

In Pakistan, it is often the most compromised and corrupt groups and individuals that rely on the tactic of hurling corruption allegations. It is emblematic of their inherent pettiness and a projection of their own corrupt background.

The article itself https://www.dawn.com/…/is-corruption-really-the-source-of-o… is a reasonable analysis of why corruption is not the biggest problem for countries like Pakistan. It did a decent job of studying the framework of corruption and how some degree of corruption might be necessary to facilitate transactions and economic growth.

The framework for studying corruption requires better analytical rigour. Such a rigour is clearly lacking amongst significant sections of Pakistan’s urban bourgeoisie for whom hypocrisy and selective accountability is a way of life. This article is not for them.

It is also important to present the nuance within this phenomena. For example, can facilitating transactions that lead to economic growth be equivalent to buying and coercing Senators during a crucial vote – as PTI clearly did in Pakistan’s Senate No-Confidence?

Are the ends justified by the means? Is all corruption equal? What if a system like Pakistan forced one to make extra payments to facilitate otherwise legal transactions?

After 52 years of one-sided propaganda, vicious political vengeance and petty urban gossip, the PPP and its leadership in Pakistan have been selectively lynched using the corruption mantra. And it has lead to a worst situation.

Even anti-PPP media group like DAWN had to recently admit that the 2008-13 PPP Government was the best for Pakistan in terms of economic management in the 21st century.

The World Bank recently gave a failing grade to the PML N and PTI regimes. Based on the same indicators, the World Bank gave 6 better grades to the PPP government in 2012.

To reiterate, such analytical articles are redundant for much of Pakistan’s “educated” middle class urbanites who have been brainwashed on a steady diet of gossip, lies and half truths.
————
Peja Mistri writes:

“I have written on this too. The premises I have developed are:
1. Pakistan has no more or less corruption than any developed or third world country. Pakistan in some cases is better than developed countries because of higher awareness about corruption.

2. Corruption has no bearing on the current or any previous economic crisis. Pakistan in fact has utilized the international funding in much “honest” and “careful” way than many other countries.

I have not read this article yet, but I think there is a need to highlight that corruption has become a red herring which distracts even the well meaning politicians from the real root cause of the economic troubles.”

Tulsi Gabbard challenges Foreign-Policy assumptions and moves the Overton window – Ali A. Taj
Tulsi Gabbard, a 2020 US presidential candidate, is being smeared and slandered by US mainstream media