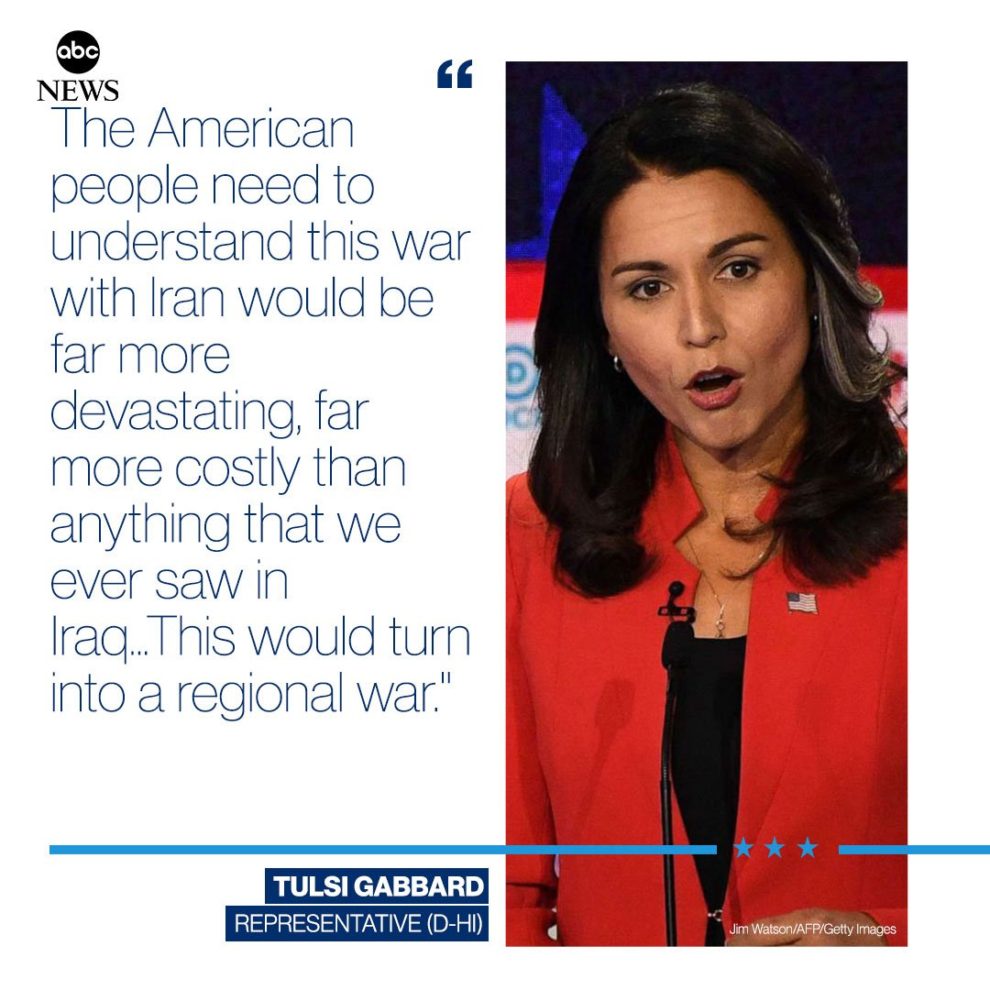 The Drudge Report political website posted a surprising instant poll showing that its visitors believed Rep. Tulsi Gabbard of Hawaii was the overwhelming victor of the first Democratic presidential debate, polling at almost 35% with 12,314 votes.

Her closest competitor was Sen. Elizabeth Warren of Massachusetts, who was polling at just under 13.5% and 4,791 votes. Julián Castro of Texas and Sen. Cory Booker of New Jersey were polling the lowest with less than 5% each.

Tulsi Gabbard also won the Washington Examiner poll. by a strikingly similar margin – 34.15% for the Hawaii congresswoman and 23.06% for Warren.

Although unscientific, the two polls indicated that the Hawaii congresswoman, 38, who had attracted attention for her silver-streaked hair and denunciation of President Trump’s “chicken hawk cabinet” had made a major impact on the nine-candidate stage.

An Iraq war veteran, she served in the Hawaii Army National Guard and was also deployed to Kuwait from 2008-2009. In her January 2019 campaign kickoff, Gabbard promised to end regime change wars and to only authorize war on direct enemies of the United States. In the debate, she promised to end America’s wars, saying: “This insanity must end.”

Gabbard’s most famous international foray was to Syria in 2017. In Damascus for a “fact-finding” mission,” she met Syrian Bashar Assad, who stood accused of using chemical weapons against his own people during the country’s civil war, killing hundreds.

In April 2017, she said she was “skeptical” the Assad regime was behind the attack and called for an investigation after the U.S. launched a missile strike in response. “Assad is not the enemy of the United States because Syria does not pose a direct threat to the United States,” she said.

The second-youngest of the 25 candidates in the Democratic race, she is married to Abraham Williams, a cinematographer and surfer who is seven years her junior. She was previously married to Eduardo Tamayo, her childhood sweetheart, divorcing in 2006 after four years of wedlock.

Tulsi Gabbard was the most searched candidate on Google after the Democratic debate in Miami
Divine Missions of Destruction: Why a US War with Iran is Virtually Inevitable – by Ali A. Taj