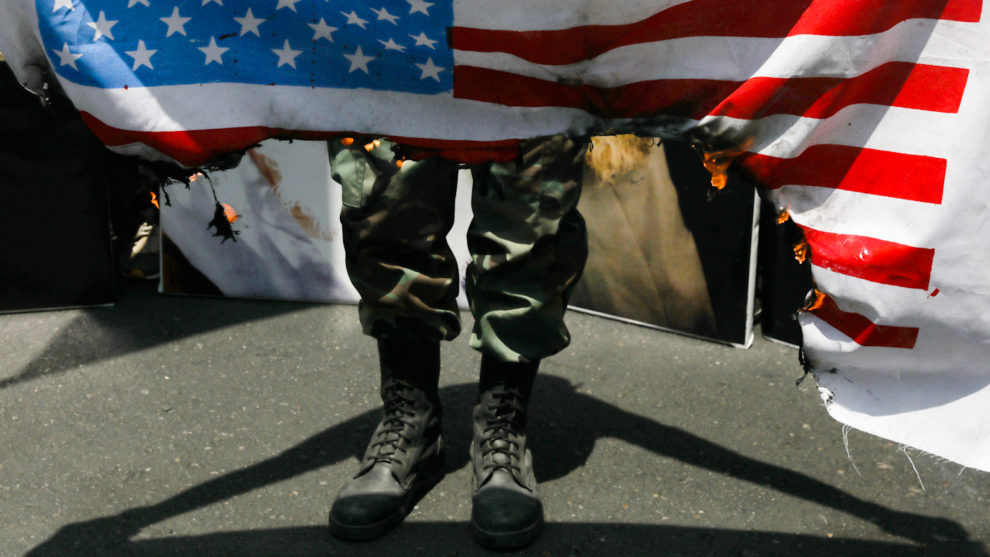 The 2015 Iran Nuclear Deal between the permanent members of the United Nations Security Council + Germany (P5+1) and Iran was supposed to usher in a new beginning. It was supposed to bring stability to the Middle East and lead to the resolution of multiple conflicts, and for a short period of time, it seemed that it might.

Yet it was obvious from the start that it was not just Republicans who rejected Obama’s foreign policy pièce de résistance. Democratic Party support for the agreement was lukewarm at best, and the 2016 elections swiftly reversed course as far as the Iran deal was concerned.

Donald Trump has always opposed the deal and his opponent, Hillary Clinton, by no means sought peace with Israel’s greatest adversary. In 2008, Clinton told ABC’s Good Morning America audience, “I want the Iranians to know that if I’m the president, we will attack Iran… In the next 10 years, during which they might foolishly consider launching an attack on Israel, we would be able to totally obliterate them.”

The same cadre of neoconservative figures that convinced Americans that war with Iraq was a necessary step in guarding against an imminent threat is in ascendancy once again, and this time they have bipartisan support.

The United States has Iran surrounded by over 80 military bases. It has increased its presence significantly near the Strait of Hormuz, a narrow passage of water that hugs Iran’s vulnerable western coast.

All the chips are in place, the box of matches lies open awaiting a single errant spark to set it ablaze. Whether that spark is introduced intentionally or accidentally is irrelevant to its ability to give the Washington hawks what they’ve been impatiently pining for.

Irish columnist Danielle Ryan lays it out rather succinctly in an editorial for Russian broadcaster RT:

There are men in Washington intent on going to war with Iran — and very few people doubt this fact. Why then, does the media keep warning us that conflict could break out ‘accidentally’? The U.S. does not go to war by mistake.”

A stock U.S. pretext for war?

Last week, President Trump predictably pinned the blame for an attack on two oil tankers in the Gulf of Oman squarely on Iran. Former CIA head turned U.S. Secretary of State Mike Pompeo — a man openly operating on an apocalyptic, end-times vision — has been busy globetrotting in an attempt to convince wary world leaders that Iran is indeed a threat and that the utter lack of diplomatic capital that U.S. officials now command should be overlooked when it comes to Iran.

Pompeo called the Gulf of Oman tanker attacks an “unacceptable escalation of tension.” So-called proof of Iran’s guilt came in the form of a grainy video that presented more questions than it provided answers.

Al Jazeera, the official media channel of the Qatari government, presented conflicting reports.  Eyewitnesses aboard the Japanese tanker that was attacked contradict the U.S. version of events:

As calls grew for an international inquiry, the owner of the Kokuka Courageous cast doubt on the U.S. narrative, saying the vessel’s crew saw a ‘flying object’ before it was rocked by a second blast.

‘I do not think there was a time bomb or an object attached to the side of the ship,’ Yutaka Katada said on Friday.

Analysts reacted to the U.S. allegations with skepticism. Even those who found the claims credible said Washington may have forced Iran’s hand with its ‘maximum pressure’ campaign of punishing financial sanctions.”

Despite skepticism over U.S claims regarding the attack, wide swaths of the U.S. media have already composed a narrative that seeks to absolve the United States of its role in heightening tensions that could lead to war with Iran. Using terms like “drifting” to describe a deliberate escalation, the current media narrative in the United States is presenting the issue as though if conflict were to begin, it would simply be the unfortunate consequence of a mistake.

In a perverse sense, they are not wrong. It is no secret that the CIA, among other subversive elements in the U.S. government, will do just about anything to justify a war it wants. Pompeo himself said of his time at the CIA, “we lied, we cheated, we stole,” and Pompeo and his war-cabinet cohort, National Security Advisor John Bolton, are the fiercest hawks to prowl the halls of the White House since the Bush administration. Both are itching to start a war with Iran, but they are not the only ones.

American war-making enjoys bipartisan support and the current frenzy to go to war with Iran is no exception. Representative Adam Schiff (D-CA) — the stalwart California Democrat who has largely led the political crusade to undermine the legitimacy of Trump’s presidency — has by and large fallen in behind the same administration he considers to be led by a Russian Manchurian candidate.

Justifiably skeptical on almost every claim the Trump administration makes, Schiff has no problem believing Trump on Iran. His problem with Trump seems to lie in the fact that he is too incompetent to sell the war to the rest of the world.

For its part, Iran sees few options out of this conflict save to confront the United States and its proxies directly. History is witness to this approach during the horrifying Iraq-Iran War of 1980-88.

By some estimates, the human casualties of the Iraq-Iran War numbered close to a million, while material damages were closer to a trillion dollars. By 1982, Iran had regained the territory it lost to Iraq’s Saddam Hussein in the war. However, Iranian leader Ayatollah Khomeini saw the only path to peace in toppling Saddam’s unpredictable regime. Khomeini refused the reparations and ceasefire agreements backed by the same Western powers that backed Saddam in his war against Iran.

This level of intransigence rooted in decades of betrayal and mistrust remains entrenched in both American and Iranian leadership and offers little hope for the future. Elements on both sides of the conflict see themselves as instruments of a Divine mission. Sadly for the planet, neither side is willing to adopt those Divine traditions that place humility above war.

A  U.S. war with Iran will be devastating for humanity. It will wreak havoc upon the environment, and it already has. Burning tankers and spilling flames on our seas and oceans are the complete opposite of what is needed by humanity to stem the insuperable tide of global warming.

Both sides have placed too much stake in dominating the region, essentially sucking the oxygen out of any compromise, yet compromise is the only hope to prevent yet another futile and destructive conflict.

Ali A. Taj is Editor in Chief of Let us build Pakistan (LUBP), an alternative news and political platform that campaigns for the rights of all Pakistanis. Visit LUBP on Twitter and Facebook.

Divine Missions of Destruction: Why a US War with Iran is Virtually Inevitable