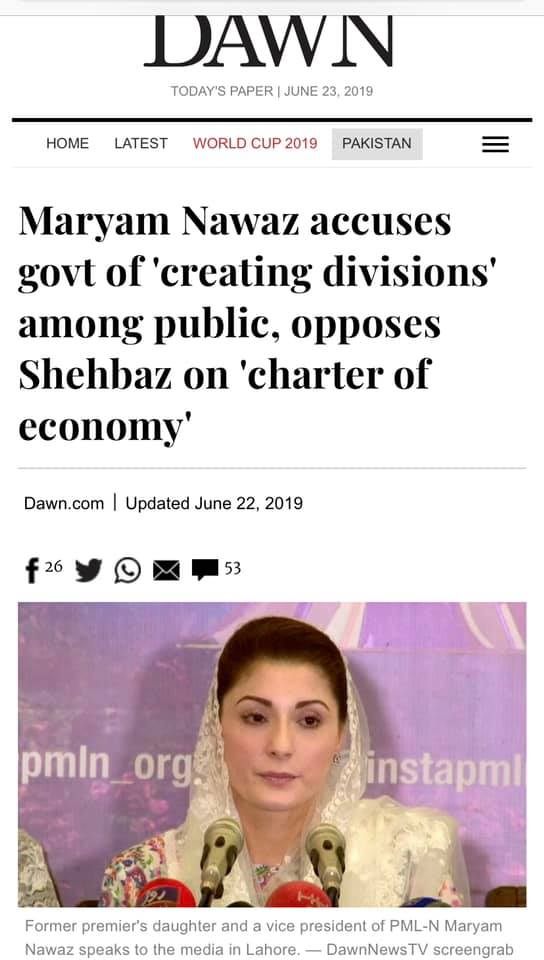 Clearly, you have taken after your mother who had more spine than any of the males in the Nawaz Sharif family.

This is still just a first step. Please tell us how your father and his bunch of sleazy hacks like Hussain Haqqani, Najam Sethi and Saif ur Rahman institutionalised the dirty tricks campaign against PPP.

It was they who first slandered the Bhuttos and now Zardaris. Even the politically-motivated NAB JIT case against Zardari

(alleging that a $95,000 wire transfer between cane growers and sugar mills is somehow the centre of a nefarious plot to loot all of Pakistan’s wealth)

was put into motion by Nawaz Sharif’s last Government.

Maryam, come clean on the decades of lies constructed by your family and their association with over ambitious generals and corrupt Jamaatiya judges (like General Kayani and Saeed uz Zaman Siddiqui)

Except for corrupt liberal sellouts and the Patwari propagandists at DAWN, nobody is buying the Good Cop/Bad Cop routine of Shahbaz and Nawaz Sharif.

Break away from the toxic and slimy legacy of the Sharif dynasty and focus on the problems faced by Pakistan.

The Hussain Haqqani network will sink both PML N and PPP. Stay away from these compromised thugs.