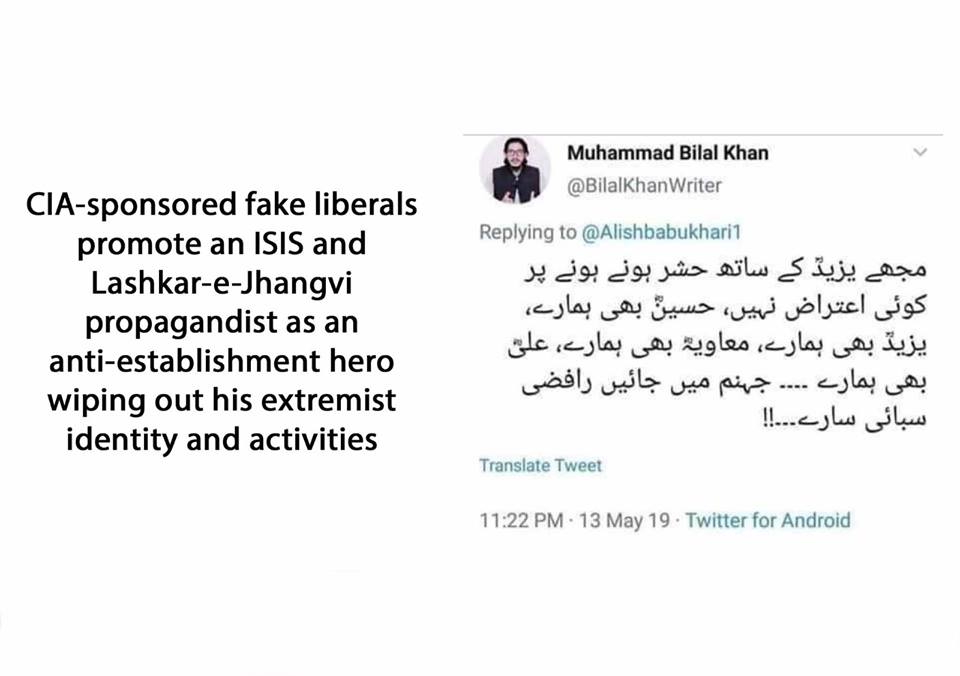 “Catalyst but for what purpose?”

Those liberals, who are calling Bilal Khan (a blogger and hardliner of Banned outfit #SSP aka #ASWJ) as their brother, trying to obfuscating or lessening his role in promotion of religious hatred and sectarianism, I never saw them to show such spirit or softness in case of young zealots of #TLY or even in case of murders of workers of Pakistan Awami Tehreek on 17th June, 2014.

I never saw Marvi Sirmed to express her sympathy for those 14 people including two women, who were killed by Punjab Police on 17th June in PML-M’s rule.

On what merit such selectivity in expressing his/her sympathy for victims they adopt?

If she had condemned, showed her sympathy and demanded for justice then she should provide just single link of her tweet or post.

Such people are part of that liberal section, which in case of murder of Syed Khurram Zaki propagated the gossips and tried much to obfuscate his murder and many didn’t express such grief and sympathy for him, which they are doing for Bilal Khan. Peja Mistri wrote a comment on my post titled with ‘Both Campa Are Miligning’.

I was reluctant to comment on your post showing your support and concern for the death of this blogger. Not because I thought it was wrong, but because I know that this guy will find so many supporters in the shame of commercial liberal mafia. He was not Khurram Zaki.

The way commercial liberal mafia is running the campaign they want to set him up as a social media hero, I have been following usual suspect likes of Marvi, Gul, Rumi etc. Marvi has declared him as her brother.

He is also serving as the catalyst to clear some misunderstanding between the two camps.