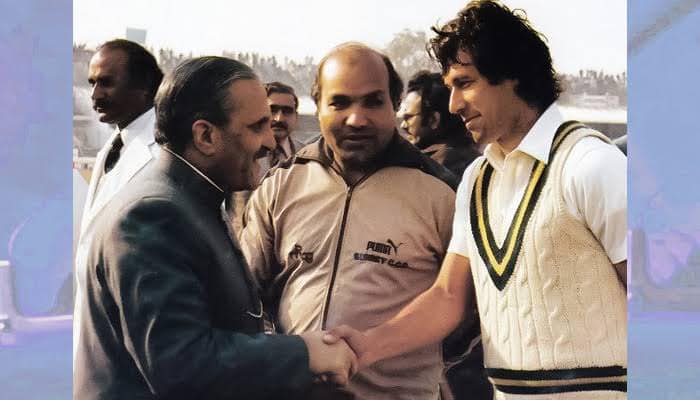 To equate Bhutto/ Ayub with Nawaz/Zia, after the former’s public and absolute break up during 1965-66, is typically dishonest. Ayub blamed Bhutto as “corrupt”. So in effect, those who developed this meme are using the talking points of “Field Marshall” Ayub – another US-backed Military Dictator.

Bhutto was a major leader of the agitation that ousted Ayub. Nawaz Sharif on the other hand wept and remembers Zia as a “Shaheed”.

It was also around this time that the subtle seeds against Bhutto’s nationality (he was studying abroad when Pakistan came into being) and his parentage (his mother was Hindu) were being planted.

Someone should ask tbe author of this meme about these facts and clear distinctions between Bhutto and Ayub vs Nawaz and Zia ul Haq.

Nawaz and Imran Khan NEVER went against Zia ul Haq – not when he was alive and not even after he was blown up over the skies of Bhawalpur.

That is why Nawaz Sharif is so beloved by the boutique-Corporate lefty-liberals and the civil society False Neutral types. He, along with his trusted hacks like Hussain Haqqani, Sheikh Rashidand Najam Sethi, was one of the pioneers in sinking to new levels of misogyny when personally attacking Benazir.

Lefty liberal sellouts in Pakistan portray their sponsor, Nawaz Sharif, as the second coming of Che Guevara. This type of dishonest comparisons are their way of absolving Nawaz while slandering ZAB.

It’s too bad that facts often puncture their rhetoric.

In the vicious and elite drawing rooms of Pakistan, gossip and urban myths are often mistaken for history.

One such slander is to dump all the blame on Bhutto to absolve other powerful perpetrators. This slander is done by the Jamaat e Islami, boutique-corporate, lefty – liberal, civil society types and False Neutral commentators. Often times, the lefty liberal talking points are no different from Jamaat e Islami (re Syria)

Probably, the biggest slander against Bhutto is that he alone “broke up Pakistan”! Ironically, some of those who accuse Bhutto of this also maintain that “Bangladesh was keeping us down”. This is the level of warped delusion we are dealing with in the case of Bhutto Phobia!

We are lead to believe that Bhutto and the LoL (Lyari o Larkana) brigade marched up to Bangladesh and used the Communist Sickle and the Socialist hammer to physically break up Pakistan. That and 15-20 words and syllables (such as “Idhar Hum Udhar Tum) that are falsely attributed to Bhutto to misrepresent his position on a very complex and tragic issue in which the then West Pakistan was the clear oppressor.

These slanderous tactics to blame Bhutto are employed specifically to absolve the Junta, Jamaat e Islami, the bureaucracy and the rapacious elites who exploited Bangladeshi jute and other resources for a quarter of a century.

Those perpetuating the slanders against Bhutto will always omit the key facts. That it was Bhutto who kept Mujeeb ur Rahman alive when General Yahya wanted him murdered , freed him and swiftly recognised and visited Bangladesh. Where he was warmly greeted by Mujeeb ur Rehman (video clips to attest this are available)

Bhutto went one step further. Against the wishes of his electorate (Manzoor/Na Manzoor speech) Bhutto hosted Mujeeb ur Rahman for the OIC Conference.

Bhutto’s Initiative of the Hamood ur Rahman Commission report on Bangladesh was one of the reasons why he was murdered by the Judiciary.