The contradictory public positions of both Ilhan Omar and Rashida Tlaib are most disappointing. On the one hand, they have correctly pointed out the deleterious role of lobbies. However, on the other hand, they continue to peddle the regime change interventionist policy of Saudi Arabia, Qatar, and Israel against Syria. 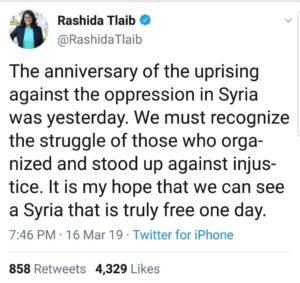 Areas held by their beloved “moderate rebels”  (who happen to wear Al Qaeda flags) have proven to be the most oppressive and sectarian and spelled genocides for other faiths and sects. Meanwhile, 600,000 Syrians have returned to areas liberated by the Syrian government.

It is this dishonesty, hypocrisy, and obfuscation of the common Wahhabi Salafi Deobandi (WSD) identity of terrorists that is at the heart of the attacks on Muslims, such as New Zealand.

This is an old playbook of the British Imperialism, later adopted and inherited by Brzezinski, attack with WSD terror and call them Muslim, so the blowback whether it is White Supremacist or RSS is on all Muslims.

Shia Muslims in North America, in particular, are the most misguided. They are following false narratives projected by the likes of Mehdi Hassan, to spread dis-information for  Qataris and the Intercept.

“Yes Rashida, I hope we see Syria saved from the claws of US intervention and the WSD terrorist proxies imported for the “Revolution”

For those who don’t know, the leading slogan of this sectarian “uprising” was “Christians to Beruit, Alawites to the Grave”. 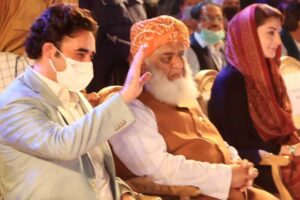