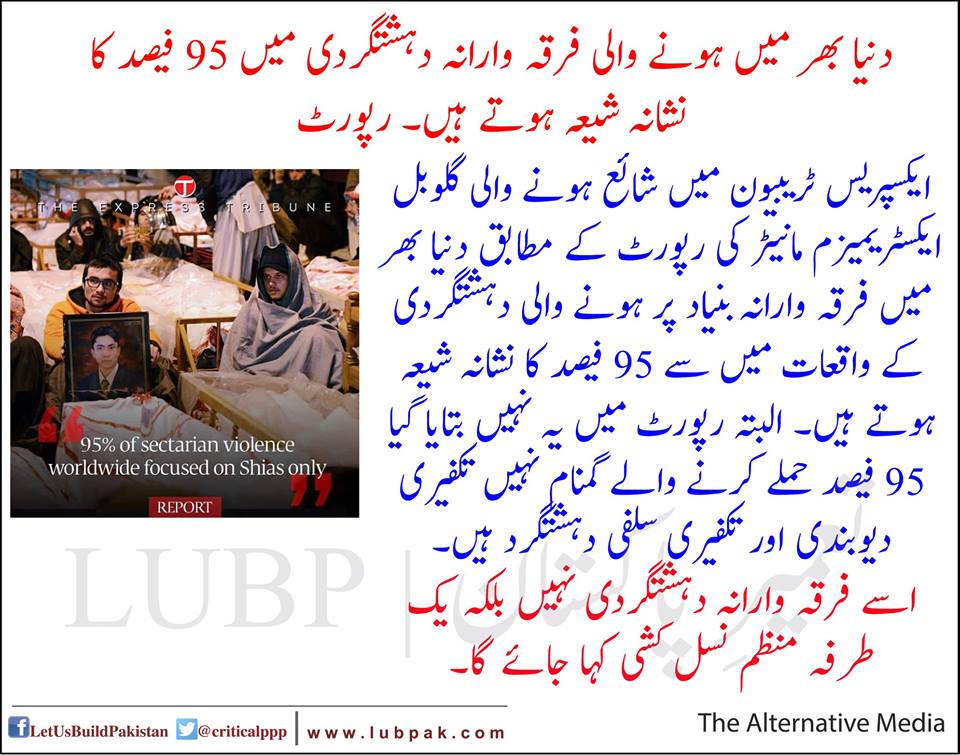 This Documentary on violent extremism in Pakistan (produced by Ahulbayt TV and ARSH, and sponsored by Al Khoei Foundation and other groups), while a step in the right direction, suffers due to some glaring omissions and unscholarly framing. While we appreciate efforts by Mr Jawad Merchant and Mr Ahmer Naqvi who have been listed as the research and development team for this documentary, it is important to highlight certain important omissions in their research.

While the documentary includes some interesting interviews with Dr Pervez Hoodbhoy and families of victims of violent extremism, it fails on a number of accounts. It does not fully convey the massive scale of the violence and its respective impact in terms of number of fatalities, injuries and attacks on Barelvi Sunnis, Sufis, Shias, moderate Deobandis as well as non-Muslim population including Christians, Hindus and Ahmadis.

Most importantly, the documentary remains completely silent on the common Deobandi identity of the extremist groups such as Sipah-e-Sahaba Pakistan (SSP, also operation as Ahle Sunnat Wal Jamaat ASWJ or Lashkr-e-Jhangvi, LeJ) which is an affiliate of the Taliban (or Tehreek-e-Taliban Pakistan, TTP). Since 1980, the extremist Deobandis of SSP/ASWJ/LeJ/TTP are responsible for the systematic murders of more than 10,000 Barelvi Sunni or Sufis, 22,000 Shias, 2,00 Christians and about 200 Ahmadis and other minorities in Pakistan. This macro-picture is completely missing in the documentary.

This is despite the fact that this topic and the Deobandi identity of the extremist group has been well researched and documented in recent publications and writing by numerous authors such as Owen Bennet Jones, Edwina Pio, Tahir Kamran, Abbas Zaidi, Murtaza Haider, Muhamad Moj, Jawad Syed and other scholars.

The documentary is thus incomplete and riddled with glaring omissions and sluggish analysis. Instead of shedding sufficient light on this issue, it is the typical combination of incomplete narratives that elevate some victims above others, while completely ignoring the majority of victims of faith based violence.

The most glaring deficiency is the omission of the specific Deobandi identity of the extremist or Takfiri groups conducting faith based violence in Pakistan. This is tantamount to making a documentary on the Holocaust without any mention of Hitler and the Nazi supremacist machinery responsible for the horrible massacres of Jews and other groups in Europe in 1940s.

Most importantly, there is no mention of Hazara Shias of Quetta and Saraiki Shias of Dera Ismail Khan, two of the most target killed communities of Pakistan. The most conservative estimates of Shia massacres in Pakistan are close to 20,000 in specific instances as well as thousands killed in general Takfiri terrorist incidents.

Moreover, target killing of Shia doctors and other professionals in Karachi and other parts of the country has not been covered either.

The documentary is also lacking in its political angling. A disproportionate emphasis has been given to Ahmadis and late Prime Minister Zulfikar Ali Bhutto. This is particularly problematic given that Ahmadi fatalities are quite incomparable to those of Barelvi Sunnis, Shias, Sufis and Christians. Thus the documentary time given to them could have been reduced in a proportionate manner.

The pernicious argument that Bhutto was the one who initiated extremism and that the military dictator General Zia ul Haq (1977-88), the founder of Afghan Jihad and Deobandi Takfiri extremism in Pakistan, was just following along, is flawed at multiple levels to the point of being ludicrous. It misses out on the fact that Bhutto had nothing to do with the draconian sectarian laws such as the Blasphemy law, Hudood Ordinance, Zakat and Ushr Laws, Federal Shariat Courts, Article 2A (that made The Objectives Resolution a substantive part of the Constitution). Similarly, Bhutto had nothing to do with Articles 62-63 of the Constitution that are tantamount to moral policing of parliamentarians. In fact, to say that Bhutto started the drift in Pakistan is again a fallacy since it was Prime Minister Liaquat Ali Khan who initiated the Objectives Resolution in 1949 under the pressure of a Deobandi cleric Shabbir Ahmed Usmani.

In terms of the 2nd Amendment (declaring Ahmadis as a non-Muslm minority), Bhutto tried to take away the prerogative from Jamaat e Islami by having this issue tabled into a parliamentary debate. The debate took place in parliament where both sides made some disturbing arguments in favour of Takfir. In the end, parliament and not just Bhutto – unanimously signed this. This included secular parties such as National Awami Party led by Abdul Wali Khan. Indeed, it were the subsequent laws formulated and enforced by by General Zia ul Haq that formalised the ghettoization of Ahmadis at the national level. Today, Ahmadis are being killed by the Sipah-e-Sahaba Pakistan (SSP/ASWJ/LeJ) in whose creation and protection, General Zia ul Haq played a direct role. As per senior police officer, Mr. Khosa, General Zia ul Haq personally intervened to grant immunity to Haq Nawaz Jhangvi, the founding leader of Sipah Sahaba/ASWJ-LeJ. Without General Zia ul Haq’s protection, Haq Nawaz Jhangvi would have been made accountable to the law.

The documentary is also silent on the role of the former Prime Minister Nawaz Sharif (disqualified on charges of corruption by Pakistan’s Supreme Court) in forging an informal alliance with the banned Deobandi terrorist group SSP/ASWJ through his ministers such as Rana Sanaullah and Chaudhry Nisar Ali Khan since. As a result, the group has been free to hold public rallies and spread extremism in all parts of the country despite being banned. Similarly, the documentary is silent on the role of a specific section within MQM (an urban political party in Sindh) which was in tacit alliance with SSP/ASWJ and was involved in target killing of members of the Barelvi Sunni Tehreek and Shia activists.

An Eastern Times editoral (“Violent Extremism in Pakistan – Roots, Growth & Support-Documentary Film”) also provides some important context and details that are lacking in this documentary.

“In the context of geo-political situation in late 1970s, another aspect that needs be cleared is that the USSR did not invade Afghanistan. Rather, the Socialist Republic of Afghanistan government had requested USSR to help the people of Afghanistan from terrorist and proxy interventions by the US and Saudi imperialism and its regional allies. At that time Socialist Republic Afghanistan was facing the same situation which Syria is facing today. We are surprised when Ahlulbayt TV’s producer allowed the usage of the term ‘invasion’ to describe the defense cooperation of USSR with the legitimate Afghan government.

The documentary does not reveal the (extant) of the role of US imperialism in promoting ‘Jihadist Terrorism’ along with General Zia-ul-Haq, Saudi Arabia and other secondary agents of promoting Jihadism. There is Saudi Arabia, who expanded hatred radical Wahhabi and Takfiri ideology all over the world with the full support of the US and Europe, while crushing democratic and progressive forces in Asia, Africa and Latin America. Retrogressive forces were used to replace progressive forces by US and Western capitalist proxies.”

The Eastern Times editorial asks a very interesting question. The US establishment is not depending on Pakistani generals for its support of Al Qaeda and ISIS in Libya, Syria and Yemen. Thus some but not all of the blame may be apportioned to the local Pakistani establishment in the spread of violent extremism. Saudi Arabia with the key support and backing of the United States has played a far bigger and global role in spreading this Takfiri menace. The documentary’s bias against the left wing Bhutto government makes it fall in the trap of diluting the role of Saudi Arabia and the United States.

Still, there are parts of the documentary that are useful and can be salvaged for a better documentary that does not omit the specific (takfiri) Deobandi identity of the perpetrators. Furthermore, much more needs to be said of the joint Saudi-US project of sponsoring WSD (Wahhabi Salafi Deobandi) proxies in not just Afghanistan but also in Libya, Somalia, Yemen, Syria, Albania and Bosnia. This context is too diluted within the present documentary.

LUBP Stands in Solidarity with Hussain Naqi
Editorial.: The Murder of Maulana Sami ul Haq is a Conspiracy to thwart peace in both Pakistan and Afghanistan