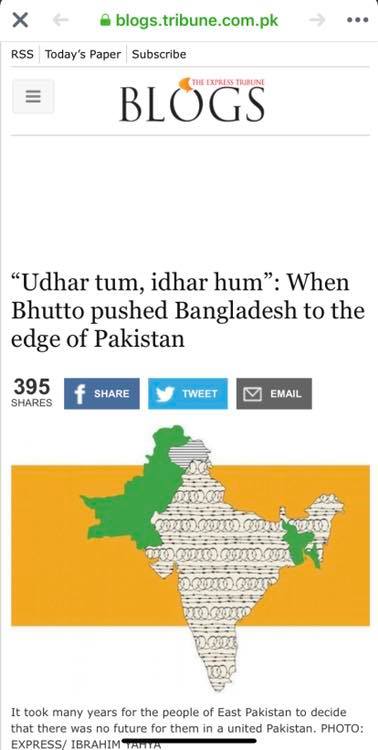 If you are looking to validate your pathetic bourgeoisie psychosis and want to provide cover to criminal juntas and their Jamaat e Islami collaborators, the Express Tribune’s blog on blaming Bhutto for Bangladesh is perfect for you.

#ShakirLakhani’s blog is a typical example of the excrement that is floating around in the cranial cavity of our urban middle-upper classes. His pathetic and one-sided “blog” is mostly bereft of nuance or complexity.

It relies on the late Abbas Athar’s shortened headline to describe one speech by Bhutto. For our chattering classes, one out of context headline quote (Idhar Hum, Udhar Tum) is the major basis for Pakistan’s break up in 1971.

The article does not even bother talking about the 1954 provincial elections which were swept by the Jugtu Front. And where (then) East Pakistan was denied it’s provincial rights.

Of course, in his typical Anti-Bhutto pathology, Shakir Lakhani is too blinded by the typical bourgeoisie prejudices which have given rise to the Imran Khans.

Like the rest of his pathetic propaganda and apologist article, Shakir Lakhani ends with the typical lie about another False quote dishonestly attributed to Bhutto.

Wheras Bhutto correctly criticised the inability of the Constituent assembly and its inevitable failure to provide a constitution “It does not have legs to stand on” was misquoted as “I will break your legs if you attend”!

The sad part is that highly educated Pakistanis are so blinded with their virulent hatred for the PPP that they will resort to the outright lies and fabrications that constitute this pathetic article.

Motive behind witch hunt against Zardari and Bilawal
Victoria and Gwadar