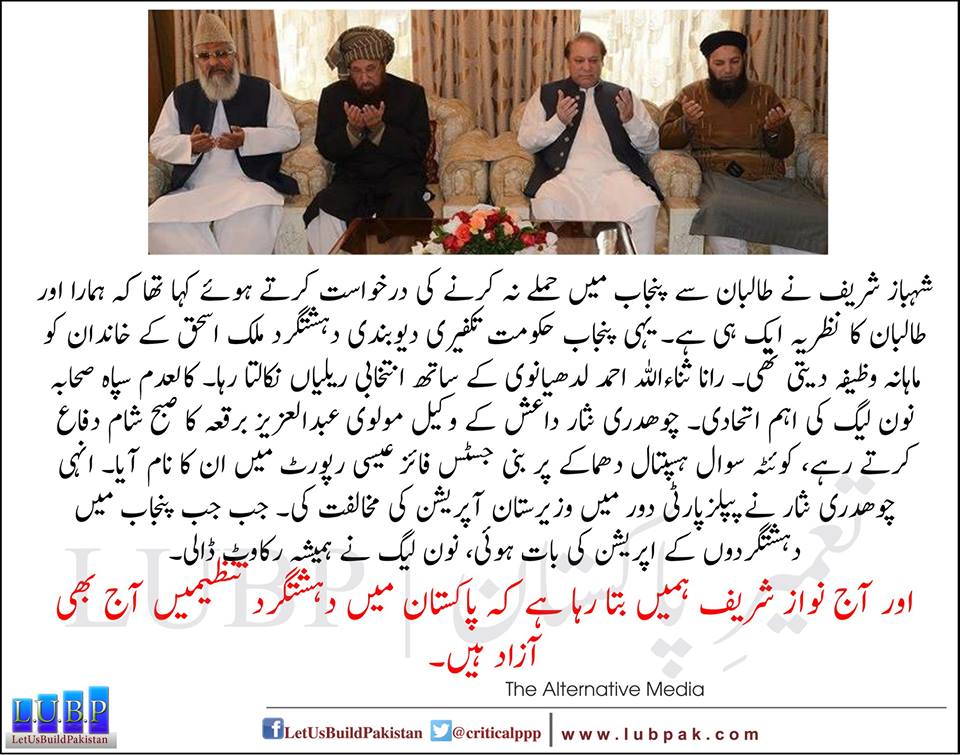 1. Nawaz Sharif is establishment’s long time crony. Military general (particularly takfiri faction) has invested in him for over three decades. He has appointed 6 military generals as COAS. He has deep rooted relationship with not only current generals but the lower ranking officers like Brigadiers.

2. Deobandi/Wahabi extremists have a long standing relationship with Nawaz Sharif. And this relationship is strengthened by the support of Saudi Arabia’s monarchy.

3. Pakistan’s military establishment have not been able to find the winning formula for general elections. The only formula that has worked more than one time is of violence and terrorism. All other formulae they tried in different elections like ’71, ’88, ’93, 2008 have miserably failed.

With this three postulates, it seems really hard to understand the latest strategy of military generals. Nawaz Sharif’s current rhetoric against military establishment, apparent accountability of Sharif’s family and some of the agency tout media and anchor’s support for Imran Khan and opposition for Nawaz Sharif. Honestly it is mind boggling. What is up the sleeve of military generals?

In order to understand this we need to first establish following facts.

1. Pakistan’s military is as diverse as the people of Pakistan, majority of the low level personals are non-takfiri muslims including Shia, Bralevis and even Ahmedis. And despite General Zia’s cleansing process to ensure that non-takfiri personals do not reach to the top, there is always chance that one or more people may become major and even lieutenant general in the military. Musharraf was a prime example.

2. Musharraf would not have been a problem, if there was no 9/11 and in his later years an open war against takfiri elements in the military. This caused military establishment to take bitter pill of exposing themselves to general public criticism. Recall how General Musharraf was forced to leave even the hand-cuffed post of COAS (Kyani as the Deputy COAS was running the affairs of military at that time). Musharraf was forced to relinquish the post of COAS just to ensure that the media campaign against him is run only as the President of Pakistan and not against the COAS.

3. Due to the emergence of social media military establishment has realised that there is no way they can stop the criticism against the military generals to reach the general public in Pakistan.

4. Last but not the least, military generals have for the first time realised how much people of Pakistan dislike them, and that again thanks to the social media.

Keeping this four facts in mind, it is not hard to understand the new strategy of military establishment. I can tell you that it is dangerous and unknown path our military generals are pursuing. It can backfire and can critically damage their cause forever. In fact 2018 elections have the biggest potential so far to change the destiny of people of Pakistan. I am not saying that it can happen in one election but I am sure that we might turn into the right direction after the general elections (I will elaborate this further in subsequent column).

If we carefully analyze the events since July 24th of 2017, when Nawaz Sharif was removed from the post of PM on clumsy grounds of Iqama while it was an open and shut case of proved corruption, one thing you would realize is that everything seems to be so obviously staged. In fact the tout anchors, particularly the commercial liberal democrats tell the whole game plan as if it has been given to them by some director and they are supposed to rehearse it many times. Take the example of Imtiaz Alam who will explain in detail the whole “narrative” every now and then in Report Card. Nusrat Javed in his zeal keeps telling what establishment is going to do next. From Iqama to daily stage show by NS in front of the Accountability Court, counting his visits in public meetings. It is as if someone told that you will hundred one (101) “paishis”, he can go to London for 7 days, Maryam will be allowed 4 hours to speak in the court.. and above all all of them of are given a written script.

The plan is very simple, portray Nawaz Sharif as Nawaz Che Guevara who somehow woke up one fine morning with the new found identity as the revolutionist. Fortunately this coincided with the Panama case, our Che Guevara despite being a revolutionist did not want to loose his wealth. So it turned out pretty well, use the Panama case to enhance his anti-establishment credentials. This was a win-win situation for both military establishment and Nawaz Sharif.

The political engineers are confident of their success based on the judicial movement success in 2007. For them it is foregone conclusion that Nawaz Sharif will sweep elections in Punjab and with some more engineering they will get him 2/3rd in the assembly bringing him back as the prime minister.

The end goal however is still elusive. There is no way military establishment can trust the people of Pakistan, particularly those poor, illiterate ones living in South Punjab and Sindh. There is a great danger that PPP emerges the spoiler in those areas. And it is not just PPP, it is Imran Khan as well who can not be trusted. He is a new entrant and will not be easy to control specially if he gets unexpectedly more seats than planned.

For Nawaz Sharif there is much more at stake, his wealth may be in jeopardy in case of unexpected results in elections. That is why he is more nervous than military generals while going into elections. Both military establishment and Nawaz Sharif has played a dangerous gamble of their life

On June 6, 1963, at least 116 Shia Muslims were massacred
Mud Slinging: A Patwari’s Guide to Electoral Victory