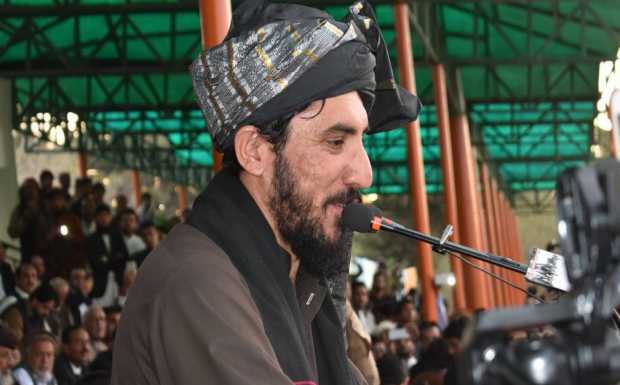 The following rhetorical questions have been raised by sections of Pakistan’s “intelligentsia” and/or Commercial Liberals and need to be addressed.

Are we really living in an era where the existential threat from the Taliban has receded?

Has Takfiri Deobandism receded as the main cause of terrorist violence in Pakistan and has it been replaced by Sunni Barelvi and “Sufi” radicalsism?

Is the Pakistani State going through a profound sectarian change?

Has Deobandi-Salafi militancy been replaced with Sunni Barelvi militancy?

If Sunni Barelvi militancy is in ascendancy in Pakistan, where has been used as a militant proxy?

Ali Arqam aka Anwar Ali Durrani,, a “liberal” activist and an apologist for the commercial liberal mafia has written to defend the recent homage paid by the leaders of the PTM to the Jamia Akora Khattak/Jamia Haqqania madrassa. PTM leaders, Manzoor Pishteen and Ali Wazir recently paid a visit and offered servile and friendly support to this notorious madrassa.

The background to this article, i.e., Ali Arqam’s patronage by the commercial liberals, is important as it provides context to the spurious claims. For one, he is part of the same network that has misrepresented Nawaz Sharif’s power games and desperation to extend his dynastic regime as an “anti establishment struggle.” Ali Arqam is also part of the network that is in denial about PML N’s role in supporting faith based violence and militancy in Pakistan and like other “liberals” who get their talking points from the West, limits the blame of religious militancy on the military part of the establishment.

Clearly, the world knows that the West did not need the approval of an ISI Colonel to support similar Takfiri terrorists in Syria, Iraq and Libya. Arqam’s second contention is ironic given his weak and apologist arguments to absolve the leaders of the PTM who are also mainstreaming Takfiri extremists and terrorists.

In his article, Arqam makes some incredulous, dubious and weak claims which are contrary to ground realities. The first claim is that Pakistan is now in a “Post Taliban” era, a laughable claim given that terrorist violence in Pakistan in places like Quetta, Parachinar, D I Khan and Fata is still dominated by the Takfiri Deobandi nexus of the Sipah Sahaba and the Taliban. The second claim is that the State has crushed Deobandi militancy and has replaced it with Barelvi militancy!

Both claims actually contradict each other.

Would Ali Arqam care to explain the continuous targeting of Shia Pashtuns, Hazaras and Seraikis in D I Khan and Quetta since just the beginning of this year?

All of these murders as well as the target killing of a Shia banker in Karachi, have all been carried out by Takfiri Deobandi terrorists. Similary, 4 Christians have recently been murdered in Quetta. Not ONE of these terrorist acts have been committed by Sunni Barelvis. So clearly, Ali Arqam’s spurious contentions are not based on fact but on a tribal sectarian bias.

It is obvious that in his apologist stance for the contradictions emerging in the PTM, Ali Arqam is resorting to intellectual fraud and dishonesty.

On the one hand, Arqam and other commercial liberals have castigated the Pakistani State (read Security establishment) for not carrying out a proper operation against the Takfiri (Deobandi) terrorists of the Taliban. They have highlighted that the National Action plan was not implemented properly. And for these shortcomings, their sole attack is against the Pakistan army while providing a clean chit to Nawaz Sharif and other regional and inter
national actors (Saudi Arabia) who have supported faith based violence in Pakistan.

After having taken this position, Arqam and other neoliberals are now arguing that the State’s operation against the Takfiri Deobandi terrorist networks has been successful – too successful in fact and needs to be stopped.

This contradiction is at the heart of the problem being faced by the Pashtun Tahhafuz Movement (PTM). The gist of Arqam’s claim, that Deobandi Takfiri groups have now been handled by the State, are laughable at best and typically dishonest at worst. After all, the Jamia Binorias, Lal Masjids, Jamia Farooqia and Jamia Haqqania are not just thriving; they have the public support of the very groups that are basing their cause on rights and dignity. Hate centers like Jamia Haqqania are the very antithesis of PTM’s stated objectives!

As for PTM drapting itself with an “anti establishment” cloak,

Sub-Nationalist groups within a larger federation have a right to equal rights and a life of dignity and respect. These were the stated goals of the PTM. However, these goals are in complete contradiction to PTM allowing Punjab-origin hate groups like Sipah Sahaba a platform within their movement while shunning the PPP. Similarly, PTM has been less than supportive of the most beleaguered and under siege Pashtuns. The Turis and Bangash are amongst the only Pashtun tribes that have successfully resisted the Taliban onslaught for decades and paid a terrible price in the process. Instead of taking up their banner, PTM’s leaders choose to give their allegiance to the hatemongers at Jamia Haqqania.

In the Establishment’s project of Strategic Depth which is the use of Takfiri Deobandi proxies to carve out spheres of influence in Afghanistan, the Jamia Haqqania was the leading seminary in support. It was the Ground Zero, the base camp for the Taliban. And those dishonest commentators like Arqam want us to believe that Manzoor Pishteen and Ali Wazir paying their respects to the Establishment’s Ground Zero is morally justifiable. Clearly, the irony and reality is lost on these people.

Apologists like Arqam who are desperately trying to shift attention from PTM’s exposure as a sectarian and Taliban mainstreaming movement are clearly writing in the Post Truth era. Where contradictions can be papered over with a sprinkling of outdated slogans and blatant hypocrisy.