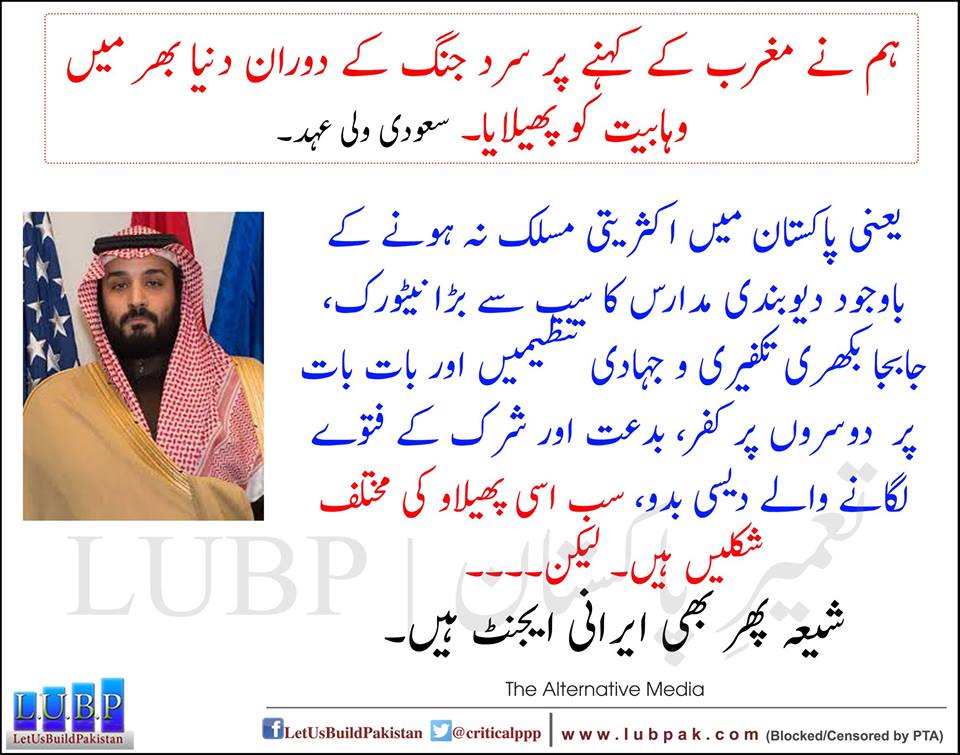 Proving once again that Wahhabi Fascism and Western “Civilization” are inextricably linked since the Lutheran-Calvinist doctrine of puritanical literalism.

In 1802, when Wahhabi hordes attacked Karbala, Karl Marx was not even born! British imperialists backed Wahhabi terrorists in Hejaz (Lawrence of Arabia) years before the Bolshovek Revolution even took place and nearly 30 years before the start of the Cold War by Truman.

Previously, Wahhabi terrorism was justified by its Western creators as a “bulwark against the Iranian Revolution” – in itself a morally unjustifiable argument.

Those who deny the culpability and agency of either the WSD (Wahhabi Salafi Deobandi) Takfiris or the West, in creating this global destruction and hate, are being dishonest.

Previously, the spread of Wahhabism/Salafism and its South Asian version, Deobandism, was justified as part of a False Binary of “Sunni vs Shia” – another stupid and dishonest argument as WSD terrorists have murdered both Sunnis and Shias all over the globe.

In Pakistan, some commercial liberals justified virulent Takfiri Deobandi terrorists and hate mongers as an outcome of 3-4 Shia and Sunni Barelvi landlords in Jhang.

A question for these commercial liberals sellouts:

Have you received the latest correction memo that your darling Sipah Sahaba terrorists are backed by the West-Saudi Arabia because they were meant to oppose communism in Pakistan??

Because the latest memo disproves your lies that Sipah Sahaba in Pakistan is justified because they were a “peasant Marxist movement fighting landlords”. Because “fighting Communism” is supposed to be the opposite of that!

Of course we all know that Russia has abandoned Communism since the 1980s and that China too is not in the 1960s anymore. Of course, these facts will not prevent the Neoliberals and Neocons from lying to you that their partnership with Al Qaeda, Taliban, ISIS and Boko Haram is to fight Communism!

It seems that the 1980s manuals have not been updated. Come on ‘Muricans, even your once loyal Pakistani Matric pass generals have updated their playbooks.