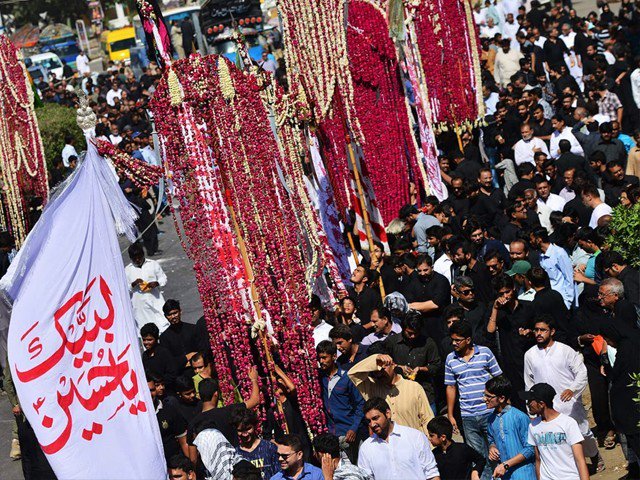 Editor’s Note: Further to this article as we think the author missed some key points. The closure of roads and mobile networks is because of the security threats posed by ISIS-affilated, interconnected Deobandi terrorist groups like Sipah Sahaba aka ASWJ-LeJ/Taliban/Jaish/Jundullah/Jamaat ul Ahrar etc. These groups attack not just Ashura processions but also Milad gatherings, Churches, Gurudwaras, Mosques (Sunni, Shia, Ahmadi), temples. They also attack schools and massacre children. They have attacked hospitals on numerous occasions. Last year in Quetta, they massacred hundreds of cadets and lawyers. The regularly attack the police and army. They even killed and burnt down their own mosque in Rawalpindi in 2013 to stop Ashura Juloos. In short they are a menace to society. Does it not make sense to arrest them so that these security measures are eased? And thanks to the actions of Salafi-Wahhabi groups like Al Qaeda, ISIS and Boko Haram, excessive security measures have become a global phenomenon. The indignity and massive inconveniences faced by millions of travellers worldwide, on a daily basis, is because of WSD terrorists – and NOT because of Ashura Juloos. Those who deny this reality are being dishonest and hypocritical. New York, London, Toronto close parts of their city nearly every weekend and Ashura julooses are also allowed legal access here.

“Roads blocked, no mobile networks and markets are closed. Please stop bothering your fellow countrymen and limit yourselves to the imambargah or else shift these processions outside the city, somewhere on highway.”

A typical, insensitive and privileged Pakistani comment. But this statement was not the only one. 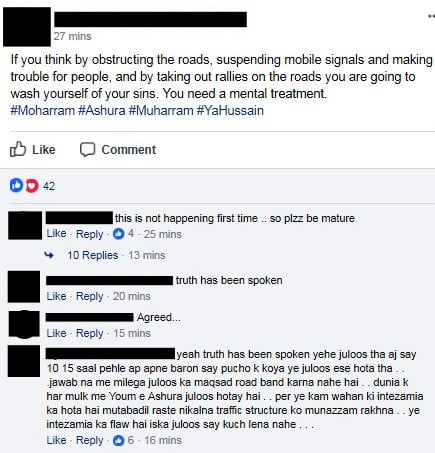 It is not unusual for the Shia community to hear such insensitive comments from Karachiities, whose lives are completely uprooted during 9th and 10th Muharram. Such insensitivity may not be uncommon, but it is hurtful, given the day and the solemnity of the incident being marked in Muharram.

The first problem to be addressed is the roads being blocked­ – is that something surprising for us? Are we not living in the same Pakistan where roads are blocked on a regular basis for someone important or higher up?

Having a procession on the 9th and 10th Muharram is tradition; in fact, before the sectarian divide deepened in Pakistan, there used to be a time when Sunni Muslims would join the Shia community during the jaloos (processions).

Another concern brought up was the closure of mobile networks and markets, which should not come as a surprise given the state of security in this country. The constant attacks on the Shia community and the general lack of safety in Karachi is what compels authorities to establish this protocol and switch off mobile networks.

Ultimately, however, it does not feel like much when the closure of networks may lead to saving hundreds of lives by thwarting possible terrorist attacks. If mobile networks are shut on any other religious day, one that is not observed by just any particular sect, will you feel the same level of hindrances and agitation in your life?

In the past, juloos used to cross the MA Jinnah road, yet the markets were never forced to shut down. Nonetheless, with the security situation in the city deteriorating and the number of attacks on Shias increasing, it is important to take all necessary measures to ensure the safety of all Pakistani citizens.

Changing times and increasing danger is responsible for inconveniencing the larger public; it seems rather unfair to ask a certain religious sect to stop a practice they have been observing for centuries when they themselves are victims of sectarian violence. In the past, even the Sunni community used to be a part of these processions for the love of Imam Hussain (RA) and used to voluntarily close their shops in respect of 9th and 10th of Muharram. And since when did love and respect for Prophet’s (pbuh) grandson only apply to Shias? Furthermore, even today, the foremost family in the business of making alams (banners) in Pakistan is a Sunni family.

“Please stop bothering your fellow countrymen”– it is hard to argue with such flawed logic. The idea that people would be bothered by a peaceful procession that has taken place historically to commemorate Imam Hussain (RA) is honestly mind-boggling. One does not have to be a Shia to feel sorrow for a man who was brutally martyred along with 71 of his men, including his two sons, nephew, and brother, during the tragedy of Karbala.

“Limit yourselves to the imambargahs, or else shift these processions outside the city, somewhere along the highway?”

It is an unfortunate and sad day when on a day of mourning, you are not only attacked for grieving but also told to curb your grieving.

If you agree with the sentiment that Ashura causes an inconvenience for the rest of the nation and that Shias must change their ways or stop altogether– let me share with you the identity of the aforementioned privileged Pakistani.

It is none other than Malik Ishaq, the leader of Lashkar-e-Jhangvi (LeJ). How pitiful it is when our people choose to side with the leader of a banned terrorist organisation, rather than their own Muslim brethren.

Are you in solidarity with this banned outfit? Do you even know the meaning of a juloos? It is a peaceful procession meant to take place on roads and not inside.

We already know what happened to Shia Kashmiris in Indian-occupied Kashmir where Shias were attacked by the Indian police during a procession. And we are already witnessing increased targeted sectarian killings in Pakistan

Regardless of whether you are Shia or Sunni, one can agree that what happened at Karbala is an incident of great courage and suffering on the part of Imam Hussain (RA) and his people.

Growing up in a family that is half Shia and half Sunni, I have always experienced tolerance from both sides for the faith of the respective other, and hence know that it is possible to be civil and understanding of Ashura processions.

Finally, I would like to end this with something I once read,

“There is no Shia or Sunni when it comes to the tragedy of Karbala. You are either with Imam Hussain (RA) or with Yazid.”

The tragedy of Karbala reflects on Yazid’s brutality and oppression and Imam Hussain’s (RA) courage. We should remember,

(Karbala is a lesson)

Not just for Shias, but for all of mankind.