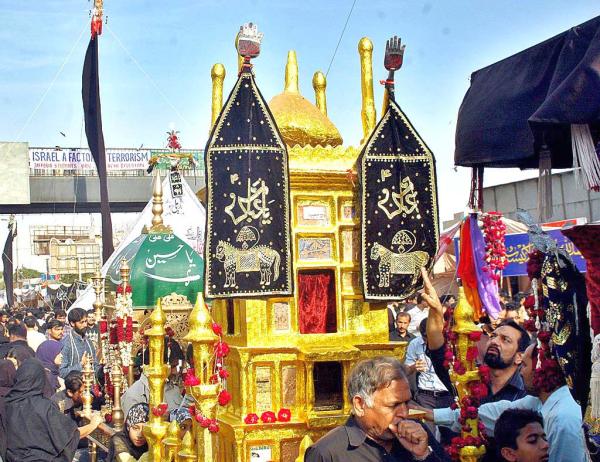 Note: This write up has been taken from the book ‘THE BRAHMANS, THEISTS AND MUSLIMS OF INDIA: Studies of Goddess-worship in Bengal^ Caste^ Brahmaism and Social Reform^ with descriptive Sketches of curious Festivals Ceremonies and Faquirs’ Written BY John Campbell Oman Formerly Professor Of Natural Science In The Government College, Lahore.This book very first time published in 1907. John Campbell was born 8141 in Calcutta to Tea Planting parents.

For the maintenance of order in the streets, the police, having ascertained the localities where the several tazias of the year have been built, prescribe the precise route which each one must follow in order to reach the appointed meeting place. On these occasions the resources of the guardians of the public peace are, in the large cities, often taxed to the utmost, for the spirit of fanaticism is in the air, and the hostility of the rival sects of the Sunnis and Shiahs, inflamed to the highest degree, often leads to serious trouble. Muslims and Hindus also occasionally come into collision at Muharram time ; and even between the diflerent bands of Shiahs affrays sometimes take place owing to the eagerness of each party to be early at the meeting-place, as there is merit to be gained from precedence in this respect. I have myself witnessed much disorder in Calcutta during the Leaving generalities, however, I pass on to the details connected with a particular gathering of tabuts in Lahore at which I was present.

A few shops were lighted up as I walked down to street, at the end of which all the tazias were to be arranged.Near this appointed meeting-place a temporary bazaar had come into existence. One enterprising fellow had erected a canopy over his collection of tempting wares and curious toys, and had suspended from a bamboo frame a monster 80-candle-power German kerosine lamp to illuminate the little show.

At short intervals along both sides of the street itinerant vendors of sweets, each man provided with a flaring oillamp, were squatting near their baskets or flat trays, crying their wares in loud strident tones, and the passers-by were buying the pretty coloured sweet-stuffs which, dyed pink with cochineal, were no doubt very palatable to the Oriental taste.

One by one the tazias or tabids, illuminated by flaring torches, accompanied by deafening tom-toms, and attended by their own proprietors and supporters, arrived from the different quarters of the town, escorted by constables, and were arranged under police supervision on the sides of the street. This marshalling of the tazias is a moment of intense feeling and keen rivalry. Whose tazia is the best,the biggest, the most elaborate, the most costly ? these are the questions that occupy the minds of all the participators in the show, and each year the Muharram brings its triumphs and its disappointments to some or other of the tazia builders and their friends.

Amongst the specimens I saw there were many of considerable size, others quite diminutive ; but all bright and glittering with tinsel, mica, and coloured paper ; some were quaint, some pretty, and some decidedly grotesque. The underlying idea being that the tazias should, in one way or another, represent the tomb of Imam Husain, or of the other martyrs of Karbala, the designs were of course various ; butan inspection of them made it clear that the designers had allowed their imaginations to run riot in a truly Indian fashion. One of these tazias might be merely a tower of four or five storeys built on a light bamboo framework. Another more elaborate and bizarre in form would have the appearance of a strange composite being, with a woman’s face and
the body of a peacock, bearing a house on its back.

Some tazias were supported upon winged horses with long ostrich like necks, surmounted with human faces of feminine type. One was borne on the head of a winged angel, who, by means of a simple contrivance manipulated from behind, was made to beat his breast in a rather ridiculous fashion. No doubt this huge mechanical toy brought forcibly, perhaps touching]y, to the minds of Shiah spectators that even the denizens of other worlds mourned the martyrdom of their Imam.

While the tazias stood in their appointed places on the roadside, devout women were fanning them with palm leaves and horse- hair chauris (fly-flappers), and even with their own chaddars (veils). Some were Hindu women, probably unfortunate mothers, who thus paid respect to these effigies of the martyrs’ tombs, in the fond hope that Imam Husain would graciously extend his protection to their surviving children and grant them long life.

As a rule, the women who thus dedicate themselves to the service of the tazias do not sit down at all from the time the tazias are brought out from the tdbut khanas till they are finally disposed of at the local Karbala, a period which might well extend to twenty-four hours. In one instance I noticed a woman pinning on to a tazias with her own hands a paper on which her arzi (petition) to the martyr was written, and it need not be doubted that she did so in trembling hope of a favourable response. For the enjoyment of these special privileges the devotees have, in all probability, to make a contribution in money to the tazia building fund. From time to time some persons, for the most part women with babies in their arms, approached the tazias and made trifling offerings of flowers, sweetmeats, and money, which gifts were formally accepted by the attendants, and some trifling return, generally a garland of small flowers given in exchange by way of acknowledgment to the pious and now happy oblationer, who, beaming with satisfaction and hope, would place it without delay about her infant’s neck.

Many children were to be seen in the crowd wearing peculiar caps, and with tiny bells suspended round their waists. These little ones had been dedicated as it were to the Imam Husain at birth, or at some critical period of sickness or danger.

So there before my eyes were exhibited in action those simple and touching sentiments which lie at the root of religion—solicitude for loved ones, and a trustful appeal for help to any unseen spiritual power that might possibly be won over by gifts or flattering attentions to hear and answer prayers. Woman’s love, as always, was playing a leading part in the religious drama there unfolded, and, as always, man was reaping, in mundane currency and worldly goods, the harvest which sprang from the soil of her amiable and inexhaustible superstitions. My sympathies as a spectator were all with the dear women and their over-faith. Not far from the spot where the tazias had been placed two or three toy shops attracted attention. I noticed amongst the articles displayed in them, pictures of Jesus and the Virgin, but I satisfied myself that no images of the Hindu gods were for sale on this occasion. I presume their presence might have led to trouble.

However, tazias or no tazias, the everyday life of the neighbourhood was by no means seriously interrupted. Near by, just on the roadside, but in his own verandah, a charcoal vendor, clad in a loin-cloth, was lying face downwards on a low charpoy (a string-bottomed bed), and anotherman, supporting himself with a long stick, was walking about upon his prostrate body. It was not a case for police interference—no brutal assault was being committed.

The charcoal merchant was merely having himself massaged after his day’s work—perhaps he was suffering from lumbago—and for all he cared the whole world might look on while his ailment was being attended to in this, no doubt, efficient if rather primitive fashion. At a little distance, in the roadway, some pious persons had erected a stall where marsiyas or elegies were being Read in Urdu by a young man as I passed along. It was a small temporary structure made up of low wooden tables about a foot high, over which daris (cotton carpets) had been spread. The stall had no roof or covering, the sideswere made of paper, and the chief feature of the faQade wasthree moresque arches.

The stall was lighted with three kerosine lamps, and ornamented with two or three vases and a pot of artificial paper-flowers of the rudest possible manufacture. A few women stood and listened respectfully as the young minister intoned the marsiyas, but the words, though spoken in what is officially known in the Punjab as ” the vernacular,” were unintelligible to the country-folk, who, having no inducement to linger about, passed on and went their way.

As I was about to leave the bazaar, a band of purbiyds (men from the eastern districts of the United Provinces) arrived with a burst of tom-toming. “Whirling rapidly with great skill long slender poles with lighted torches at their extremities, they traced curious and effective fire-figures in the air, while others showed off their skill in fencing, to the great admiration of the assembled crowds. This exhibition seemed to be the final event of the night’s ceremonies, for almost immediately after their performance the streets began emptying rapidly.