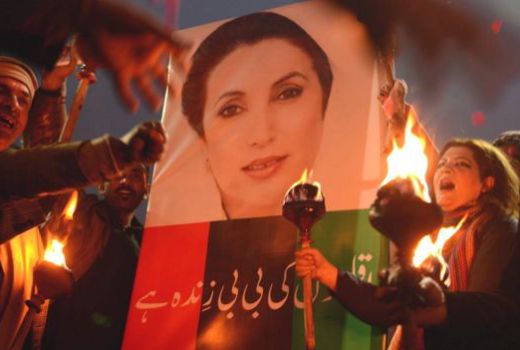 Reading DAWN, Express Tribune and the conspiracy theories of Pakistan’s urban chattering class, it seems that PPP and Zardari killed Benazir Bhutto. For these compromised souls, sections of the security establishment, Imran Khan, Sheikh Rashid, Hamid Gul, Nawaz Sharif the Taliban and their urban affiliates – they are all innocent as lambs!

Nearly 40 years have passed since the judicial murder of Zulfiqar Ali Bhutto and his obvious murderers have not been convicted or even tried properly. Then why is Pakistan’s anti-PPP media and chattering class feigning surprise and outrage about the pathetic decision by the anti-terrorism court in the case of Benazir Bhutto?

How can they hold PPP to be weak yet capable of overturning the very axis of the country in the same breath? Yet, that is precisely what their faux concern for the sham verdict of BB shows. And this is not about PPP’s weak performance or the selective and hypocritical standards that they alone are held to.

When talking about BB’s murder and the subsequent verdict that came after a decade, why are are some more interested in their governance today? How are the two topics related?

As for this stupid argument of who stood most to gain by BB’s murder, the answers are obvious. Many right wing, pro Taliban politicians (yes Nawaz, Shahbaaz and Imran please take a bow) owe their resurgence to the vacuum left after Benazir.

If the “ask those who benefit” argument were to be properly applied, the Taliban and their protectors had the most to benefit. Here was the only leader who was taking on the Taliban and had tens of millions of Pakistanis from all backgrounds backing her.

While Pakistan’s commercial liberals were dancing and holding hands with Jamaat Islami, Hamid Gul, Sipah Sahaba and Nawaz Sharif in the notorious and nauseating Liars movement, it was Benazir and her PPP that were dying by the hundreds it’s the hands of the Taliban.

Nawaz Sharif had much more to gain by murdering both father and daughter and he showed plenty of motive as well. He clearly abused Bhutto and Benazir publicly even as his henchman like Sethi abused them semi-publicly. Till last year, Nawaz Sharif was complaining during his rare visits to Parliament about how Bhutto nationalised his crooked father’s metal smuggling business.

Gossip and shared memes do not constitute evidence or facts. When the PPP requested external help (Scotland Yard, UN report) they were slammed for wasting resources. But when the courts failed (yet again), to do their job, it is PPP and Zardari that are being slammed – along with the typical petty, misogynistic backhanded “tributes” to BB.

If people feel bad about Zardari’s alleged corruption, please file a petition. It has been done before. Just make sure that Sethi’s, Saif ur Rahman and Noora are not helping you. They are not exactly known for their integrity.

Otherwise please stick to verifiable and clear facts as some of us have had it with gossip, perceptions, innuendo and personal observations. We did not engage in raising our political choices to the level of infallibility.

Post Script: Neither Bhutto, Benazir or their supporters claimed Infallibility. The father and daughter made many mistakes and missteps. Benazir admitted and tried to correct their missteps. But those who abuse them and judge them on selective and inconsistent standards do not even come close to matching their leadership, their courage or their stands. If you fee that these leaders do not represent you, that is your valid choice. So go find those who do. You will still be better off than Pakistan’s urban chatterers and assorted fascists who prop up duffers and cowards and ironically hijack the very Bhutto narrative they claim to hate.