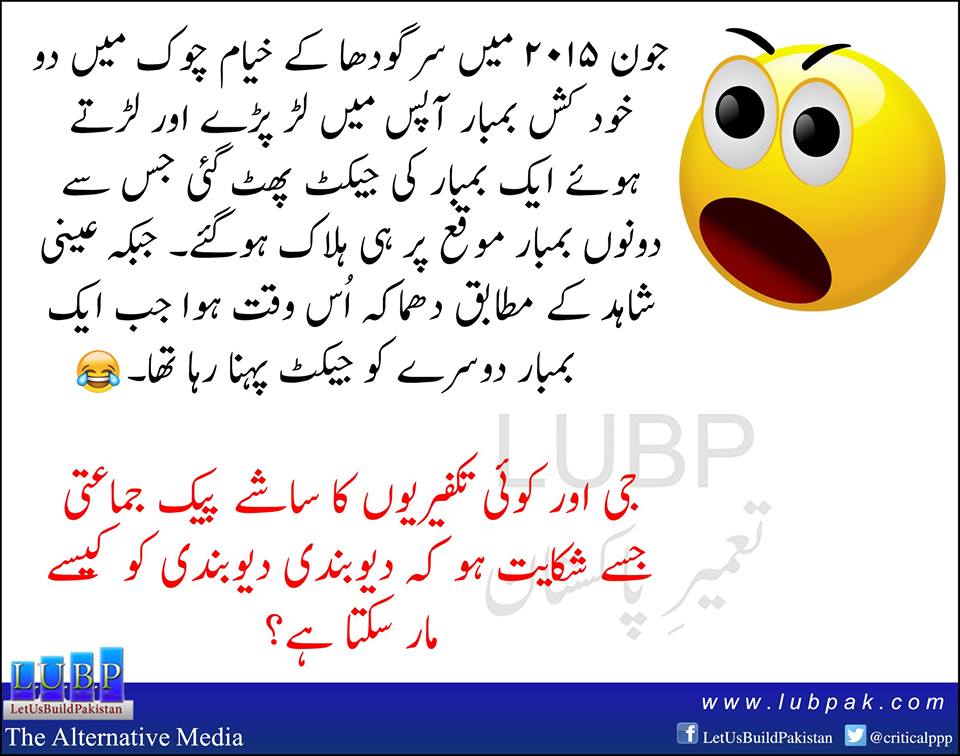 The murder of a Deobandi Tableeghi Jamaat preacher by two Sunni Barelvi brothers has elicited a range of responses. It has been condemned – as it should be. The specific sub sect of both the victim (Deobandi) as well as the Perpetrators (Sunni Barelvi) has been clearly spelt out.

Why was this identification not made when close to 100 Sunni Barelvis were massacred by Deobandi suicide bombers at Data Darbar?

Why are the Deobandi murderers of Sunni Barelvi scholars and professionals not highlighted over the last decade, of one sided violence against Sunni Barelvis by Deobandis?

This instance of specific identification is not done for Deobandi militants belonging to organised and patronised militias. From school kids to lawyers, Sunnis to Shias, Christians to Sikhs and policemen to army, the common perpetrators happen to be Deobandis. Over 90% of the times. And when 100 lawyers are massacred in Quetta and 150 school children are horrifically targeted, the Deobandi identity of the Taliban/JuA/Jundullah militants is never highlighted.

So clearly, there is a media and societal bias that favours hiding and deflecting Deobandi militancy while ensuring that the exceptional instances of Sunni Barelvi and Shia reactions are specifically pointed out.

Even though the Tableeghi Jamaat (TJ) is the gateway organisation for militant, Takfiri hate groups and terrorist organisations, like #ISIS and #AlQaeda, the law must be followed. The murderers should be brought to justice and prosecuted under the law. However, the debate should be not be shorn of context.

The TJ not only provides a soft face to terrorist and hate groups, it actively collaborates with them as is the case between TJ leader Tariq Jameel and ASWJ/ISIS leader Aurangzeb Farooqi.

Similarly, when Pakistanis are killed by vigilante groups and individuals for any instance related to the blasphemy law, the only instance where the sub sect is highlighted is the tragic murder of the Punjab governor, Salman Taseer. The governor was killed by the Punjab-government placed guard Malik Mumtaz Hussain aka Mumtaz Qadri. In this high profile murder of Governor Taseer, ALL other perpetrators are left out and the focus was exclusively on Malik Mumtaz and his recent conversion to Sunni Barelvi Islam. The role of PML N Punjab Law Minister, Rana Sanaullah in incitement against Taseer is conveniently left out. The culpability of the Sharif brothers in placing an unstable bigot to replace Governor Taseer’s federal security with provincial government security apparatus is also barely discussed. Why?

The objective is clear and it is to create further deflections and false moral equivalences.

While the growing intolerance amongst other faith groups in Pakistan in reaction to State sponsored Deobandi militancy is problematic, is there a moral equivalence?

Governor Taseer was the highest profile casualty of General Zia and Nawaz Sharif’s Blasphemy law. However why does the debate on Blasphemy effectively start in 2011?

Where was Pakistan’s civil society when Christians and Shia Muslims were being targeted throughout the 1980’s and 1990s on False accusations of blasphemy? Those using the Blasphemy law in these instances were almost exclusively Deobandi.

Since 1985, the Deobandi establishment has created a formal terrorist entity, the Sipah Sahaba aka ASWJ-LeJ to carry out vigilante violence against anyone critical of historical personalities like Caliph Yazeed. ASWJ-LeJ is in a way a continuation of the violent and sectarian Majlis Ahrar and the Mad e Sahaba movement from the 1920s. The goal of these movements was to divide Muslims of South Asia along sectarian lines and keep them busy on irrelevant issues such as restoring the Caliphate in Turkey – a project that was not even favoured by the post -Ottoman Turks under Ataturk.

Both Gandhi and Maulana Azad played a role in fostering these sectarian movements amongst the Muslims of undivided India.

Those making hectic efforts to peddle the typical False binaries and False moral equivalences are actively obfuscating the issue and providing a cover to Takfiri violence.