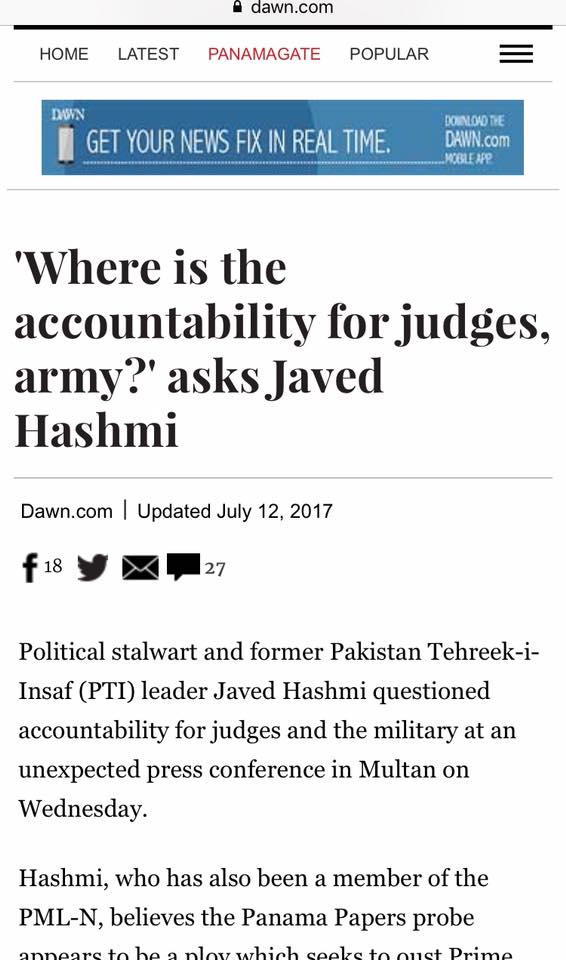 Let me start by saying that no one likes a tattle tale. You (pretended) to abandon your party PML N to join the Imran Khan band wagon and for years, pretended to be his closest aide. You then jumped a sinking ship like the rat you are when General Raheel signalled that he will back Nawaz vs Imran.

You talk about accountability for Generals and Judges. Why don’t we start with the judicial murder of Pakistan’s most popularly elected leader Bhutto? Remember that. You joined the set up that sent Bhutto to the gallows on trumped up charges!

Why does your PML N never talk about bringing charges against General Zia? Or Karamat? Or Kiyani? Pasha anyone. Wait a minute but weren’t you, Javed Hashmi, acting as the errand boy, the Chottu for General Pasha as one of the core coordinators and leaders of the Jihadist DPC!!

Wasn’t is because your boss Nawaz Sharif cut a deal with General Musharaf – a deal that Bhutto never did!

Wasn’t it your PML N that endorsed General Raheel to become another Saudi poodle like yourselves!

As for judges, didn’t your party – both PML N and PTI support the monopoly of a bunch of corrupt, compromised and dictator enabling judges. Did you not support the Supreme Couet when it released terrorists like Hafiz Saeed and Malik Ishaq who were part of your DPC!

If anyone has obstructed accountability of generals and judges, it is third rater Jamaatia Lotas like you Javed Hashmi.