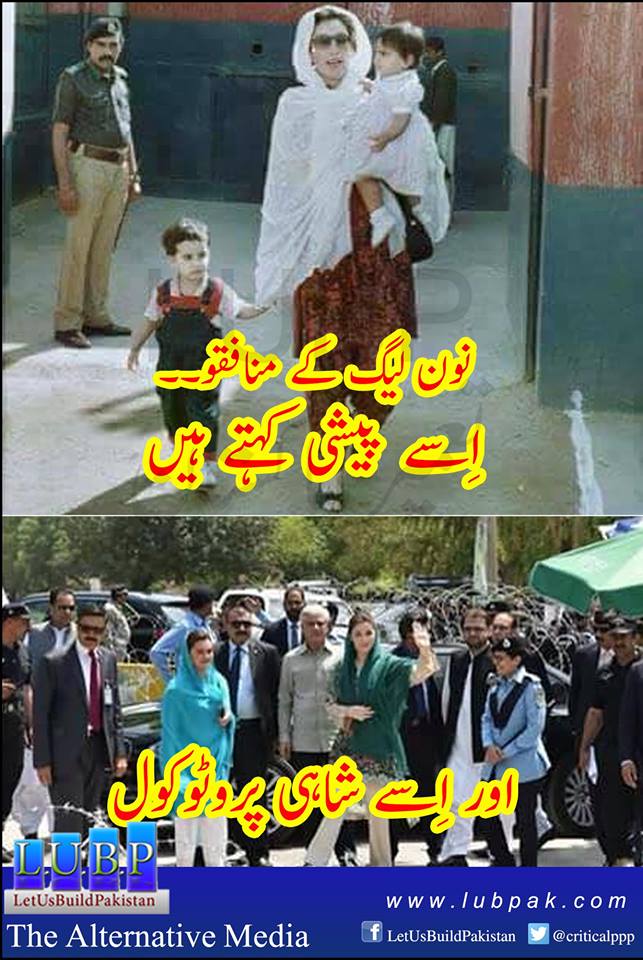 Nothing has been worse for Democracy in Pakistan than Z A Bhutto being deposed via a military coup in 1977. A coup that was backed by a bigoted, sellout Judiciary and a Jamaat e Islami/Fake Civil Society PNA movement that was backed by the military and allegedly even the CIA. One can hate ZAB but cannot disagree with the facts here.

However, after 11 years of a US-backed military dictatorship, Democracy still managed to make a comeback in Pakistan.

Throughout the 1990s, military dictator spawn like Nawaz Sharif collaborated with WSD terrorists like Osama Bin Laden and Takfiri Deobandi ISI generals like Hamid Gul to derail democratically elected PPP governments. Nawaz Sharif hatchet men and lackeys like Saif ur Rahman and Najam Sethi were there to institute trumped up and politically motivated charges against Benazir Bhutto and subjected her family and her to far, far worse than the soft and cosy accountability measures instituted by Pro Nawaz Sharif courts wrt the JIT.

The House of Bhutto was decimated but the house of Nawaz Sharif simply grew fatter on its ill gotten wealth.

Even after being thrown out in yet another coup by his own handpicked General Musharraf in 1999, the gutless coward Nawaz Sharif and his spineless clan cut the first deal they could get with General Musharaf and ran with their tails between their legs to their Saudi despot handlers.

Even after PCO judges, corrupt ROs, the Taliban and a pliant media “won” him the 2013 elections, the spineless Saudi stooge Nawaz Sharif failed to hold General Musharaf accountable for his 1999 coup and disregard of the Constitution.

Now, hopefully, the reckoning may have finally come for Nawaz Sharif and his dynasty of profligate, self righteous and over privileged buffoons.

This of course, is unacceptable to his clients. For Nawaz Sharif, the patron-client networks extend beyond right wing corporatists, smutty media, Jamaati traders and parochial upper-Middle class types. They also include some of Pakistan’s liberal elites who thrive on NGO funds and bureaucratic patronage.

After being allowed to dominate Punjab for nearly 4 decades by his establishment backers, Nawaz Sharif has deep influence within the bureaucracy. Even after some in the Judiciary may have turned against him, it remains to be seen whether the Supreme Court and NAB will proceed against him and his corrupt kids on the basis of a damning JIT report.

You will hear hypocrites like Asma Jehangir – who remains deafeningly silent on her client Nawaz Sharif’s continued links with ISIS affiliated terror groups – cry hoarse about going after others. Asma will talk about “dangerous duffers” without having the integrity to specifically highlight that her client Nawaz Sharif is has benefitted the most from “dangerous duffers” like Generals Zia, Chishti, Beg, Gul, Karamat, Kiyani, Pasha, Raheel etc

She and her types like Cyril will use terms like “the boys” “dangerous duffers” but will stay dutifully vague when it comes to naming the specific generals and colonels who gestated, propped and protected their client Nawaz Sharif. In fact, the Asmat and Cyril’s remain mostly vague in their over-hyped “anti establishment” speak.

Holding Nawaz and his kids accountable for the disparity in their massive assets and the loss making enterprises that were used to justify their ill-gotten wealth will not damage a cosmetic democracy in Pakistan.

The whole paradigm needs a rethink when a xenophobia promoting, game show host buffoon still managed to defeat another corrupt warmonger based on an arcane system devised by slave owners who feared Abolition. And a year down the road, the losers still blame Russia hackers because 4 of their 17 shadowy agencies (with a proven record of lying) have an unproven hunch. Or when a right wing regime is being propped up by Ulster terrorists. Or when the choice is restricted between far right xenophobes and presentable Neoliberal Neocons.

A possible conviction against Nawaz Sharif should motivate the PML N to introspect and shed its fascist thugs (like Kh Saad Rafique, Nehal Hashmi, Dastagir etc) who threaten and blackmail the media and judiciary. Down the road, it will force political parties to reform and not be dependant on the fortunes of paper tigers propped up by military dictators.