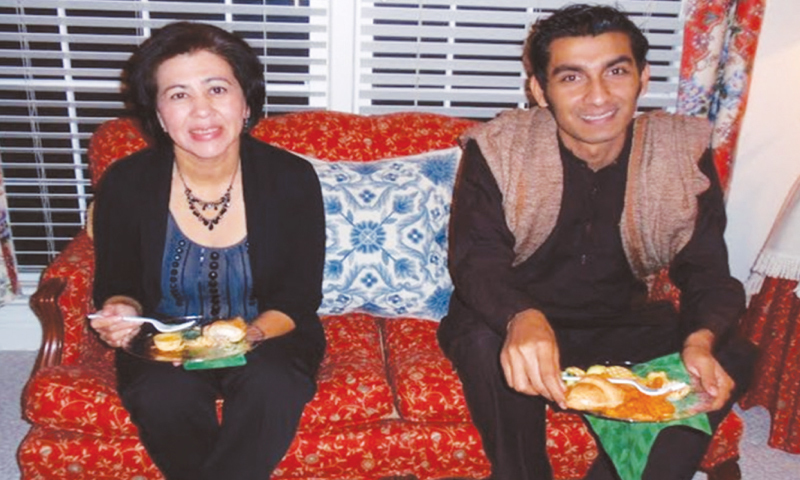 In his early 60s now, Mr Hafeez is a soft-spoken and kind man but he smiles rarely or not at all.

Although sleep-deprived and fatigued, his eyes glimmer with memories of times that were, and hope for the days to come. He travels 200km every week, from Rajanpur to Multan, to meet his eldest son in incarceration.

He was arrested on March 13, 2013, after an FIR was registered accusing him of having committed blasphemy. It was while preparing Junaid’s legal defence that human rights activist and lawyer Rashid Rehman was gunned down. The case is sub judice.

Junaid has been lodged in the high-security ward number 2 of New Central Jail Multan. The on-duty policemen at the jail are often rude to his father; they don’t let him meet his son on any day other than Monday.

His son tells him that he is not even allowed to meet his lawyer for consultation in private; in a separate room where no prison staff monitors them and listens to their conversation. Despite his lawyer’s repeated requests for privacy, officials have denied them this right on the pretext of security.

When the case first came to prominence in 2013, finding a lawyer to defend Junaid wasn’t an easy job for his father. “I found a lawyer named Mudassir but on his first day, he was harassed by some 200 lawyers who had gathered to protest against him,” recalls Mr Hafeez.

At this point, director of Human Rights Commission of Pakistan (HRCP), I.A. Rehman, referred him to the late Rashid Rehman — a Multan-based lawyer who was also the HRCP’s organiser in Multan.

Mr Hafeez still remembers how Rashid had reviewed the case even before he was approached. “He had studied the case thoroughly, went on campus to find the facts, and was totally prepared.”

Later on, while talking to the BBC, Rashid had stated that taking such cases meant walking into the jaws of death. It was Rashid who had provided legal defence for Senator Sherry Rehman in a blasphemy case registered in Multan; he was physically assaulted for representing her.

At one hearing in the Junaid case, the prosecution lawyer, along with two third-party lawyers, threatened Rashid in open court to “leave the case or he wouldn’t be able to come to the next hearing”.

Despite the history and nature of active threats, no heed was paid to complaints lodged by the defending lawyer with the Multan police. Nor was any attention paid to a letter of concern sent by the HRCP to the Punjab government in April that year, expressing apprehensions about threats to Rashid’s life not being taken seriously.

On May 7, 2014, Rashid was shot dead in his office. With him gone, all hope for Hafeez’s family was crushed as no one else in Multan dared to defend Junaid in court.

But hope did arrive, some four months later, in September 2014, when the current lawyer (who prefers not to be mentioned by name) decided to take up the case — albeit from Lahore and not in Multan.

The lawyer now travels almost every other week from his hometown and has since been able to dissect claims and testimonies being made in the court.

And yet, defending Junaid has not been easy for this Lahore-based lawyer as he is constantly forced to look over his shoulder for any potential assailants. It is only recently that police cover is provided to him whenever he visits Multan for case proceedings in the Central Prison.

Back in September 2014, he had petitioned to move the case from Multan to Lahore — a practice recommended by the law if the life of anyone involved, especially on the side of the accused, is in danger.

The then chief justice of the high court rejected the petition, commenting that there was not enough evidence to support the contention that the life of the accused or anyone representing him would be at risk.

To consult with Junaid privately for a critical hearing the next day, the lawyer travelled to Multan — only to find that prison staff on duty wouldn’t allow him to enter the prison because it was past noon. Prison officials refused to let him talk to his client over the wireless and he had to return.

The next day the hearing didn’t take place as there was no electricity in the prison.

This, of course, was the umpteenth time that the case was adjourned despite the fact that the lawyer and Junaid’s father travelled to Multan, which cost Mr Hafeez and his family thousands of rupees.

Meanwhile, the scholar from Rajanpur immerses himself in reading books even as he sees such impediments in case proceedings. “I bring him books from his collection on a regular basis; he has over 6,000 books in his library,” Junaid’s father says.

Junaid bid farewell to studying medicine at the King Edward Medical College after his first year of MBBS and entered BZU to pursue a degree in English literature.

At the BZU, he stood first, shattering a 38-year-old record by scoring a 3.99 GPA in BA Honours.

Junaid was one of five Pakistani students selected under the Fulbright Scholarship Programme to complete their Masters from the United States.

Junaid proceeded to Jackson State University, where he studied American literature, photography and theatre. “He had a contract which obliged him to return to Pakistan after completing his degree. He also wanted to complete his MPhil research in Pakistan,” explains Mr Hafeez.

After returning home, he rejoined the BZU’s literature department, this time as a lecturer. Despite the conservative environment on campus, Junaid found secular space and academic freedom in the department, which was headed at the time by Shirin Zubair.

Junaid would often invite women-rights activists on campus to deliver guest lectures and engage with students.

One of those was Qaisra Shahraz, who penned the award-winning PTV drama serial Dil he to hai. At her guest lecture at BZU, which was arranged after securing permission from the university’s vice chancellor, some students accused Hafeez and Shahraz of having passed blasphemous remarks. Later, Junaid was also charged with ‘supporting’ the themes in Shahraz’s novels.

The blasphemy allegations put Junaid behind bars while Zubair had to flee Pakistan.

One of the witnesses later produced by the prosecution to testify against Junaid reiterated the same accusations that were levelled at them back in BZU. Junaid’s lawyer brought Shahraz’s books to court and asked the witness to pinpoint the blasphemous content to the judge. The witness couldn’t — he could neither read nor understand English.

When the Multan police registered a case against Junaid; they did so based on some printouts of offensive material attributed to Junaid, which the defence attorney believes was doctored. Junaid was arrested from Lahore and brought back to Multan. Later, he was shifted to Sahiwal jail. His computer was seized and the police forced him to reveal his login details — without any court order and due process as required under the law.

The Multan police subsequently interpreted the content and decided what was blasphemous and what was not —a move that Nighat Dad of the Digital Rights Foundation finds very problematic. “Police have the powers to seize data, but in this case, the accused wasn’t provided with any legal representation,” says Dad.

Commenting on the circumstances under which the case against Junaid was registered, the International Commission of Jurists (ICJ)’s legal advisor for Pakistan, Reema Omer, argues that the evidence produced by the prosecution till now is not legally sufficient for the registration of an FIR, let alone a conviction for blasphemy under 295-C, which carries a mandatory death penalty.

“The misuse of Blasphemy Laws, particularly 295-C, and the violation of fair trial rights is a widespread and systematic issue in Pakistan,” comments Omer. She calls for considering all facts of the case and the evidence against Junaid.

“If it can be proven that the case was filed maliciously, not only should Junaid be acquitted but there should also be criminal proceedings against those who committed perjury to wrongfully frame him,” Omer asserts.

Meanwhile, life in prison is hard for Junaid but he has not given up hope just yet. He keeps on motivating his parents, but even they know that his isolated cell in prison is too hot in the summers and too cold in the winters.

“Junaid’s mother hasn’t attended any wedding functions since he was arrested. She doesn’t step outside her home much anymore; only once nowadays, to visit Junaid. She can’t sleep the whole night,” his father states while trying to hide tears in his eyes.

While the name Junaid Hafeez adorns the honour board at Jackson State University, he himself lies on a concrete floor in a jail cell, waiting for his case to inch forward.

Why framing Shia genocide as a sectarian conflict only trivialises the problem
Gama Pehalvan: The man who singlehandedly shielded the Hindus of his mohala from a religiously charged mob in 1947