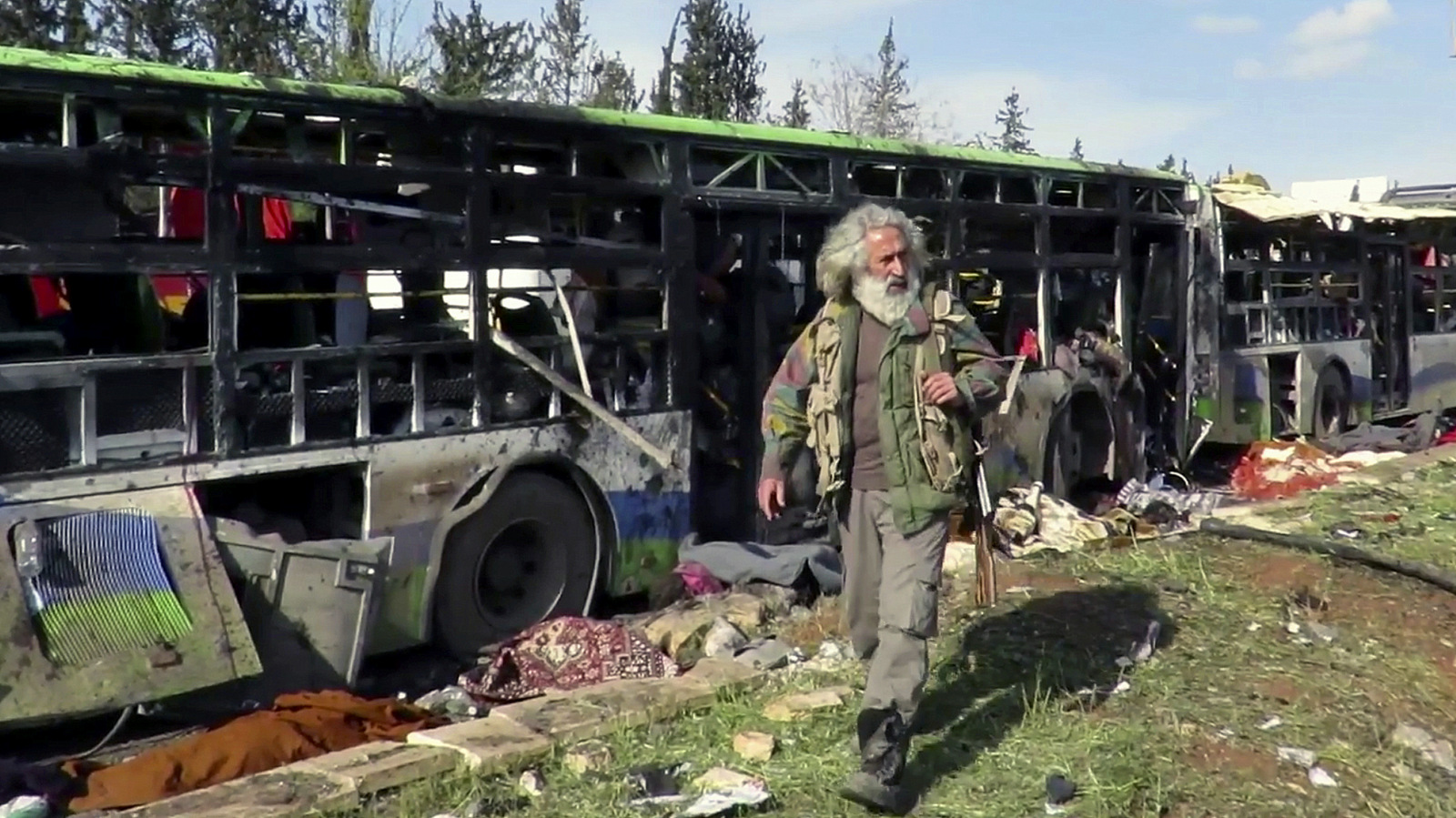 DAMASCUS– (Analysis) This week, Syria saw one of its most deadly attacks against civilians fleeing al-Qaeda-held areas in Al-Fu’ah and Kafrayah through a government-rebel civilian swap. Rebels targeted and killed 126 people, including dozens of women and children, after a blast hit a convoy of evacuee buses Saturday.

The evacuees, all of whom were Muslim Shiites, were scheduled to be bussed from the al-Nusra-Front-dominated Idlib Province as part of an evacuation deal between the rebels and the government of President Bashar al-Assad.

Strangely, the fact that the victims targeted in the blast were all Muslim Shiites was either outright ignored by the media or construed as proof that they were “pro-Assad,” a term that much of the mainstream media uses as a pejorative.

The rebels in Idlib, where the bombing took place, have been proven to be aligned entirely with the al-Nusra Front – otherwise known as al-Qaeda’s Syrian branch. This group and their associates have a specific interest in carrying out attacks against Muslim Shiites, whom they consider to be heretics along with Syria’s Christian minority and the Druze.

This genocidal ideology, which has manifested itself repeatedly through the actions of terrorist groups and rebels active in the Syrian opposition, owes to the extreme Wahhabi leanings of these groups, which seek to unite Syria under their particular brand of extreme political ideology. Said differently, many of these extremist rebels seek to create a politically-motivated theocracy that parallels that of the Saudi Arabian government. This would only include Wahhabis and extremist Sunnis who share their ideology – supplanting Syria’s secular government, which has allowed a multiplicity of faiths to flourish without fear of state persecution.

Despite their supposed commitment to “democracy” and self-determination in Syria, the media outlets that support the regime-change narrative promoted by foreign governments have conveniently omitted these facts from their coverage. For instance, Al Jazeera, funded by the Daesh (ISIS) and rebel-supporting Qatari government, refused to even mention the fact that the victims were Muslim Shiites, as well as omitting the fact that the attack occurred in al-Qaeda territory – even going so far as to imply that the attack was perpetrated by the Syrian government.

Al Jazeera was by no means alone in twisting the facts. The BBC, funded by the pro-Syrian opposition British government, also insinuated that Assad’s forces were to blame for the attack, even claiming that the attack “would not be in the rebels’ interest” despite the fact that extremist Syrian rebels have been calling for the massacre of all Muslim Shiites in Syria for years and that even the U.S. government has admitted that anti-Assad groups, particularly Daesh, are committing acts of genocide against those of different faiths.

In addition, most mainstream media coverage – from CNN to the Huffington Post – has concluded that there was “no evidence” that rebels were involved in the attack or that no one could be blamed as “no group had claimed responsibility.”

CNN went on to dehumanize the Syrian victims fleeing al-Qaeda as Assad supporters just because they were Muslim Shiites, and described the attack as a “hiccup.”

One BBC correspondent completely dismissed al-Qaeda and described the bus attack as a false flag attack perpetrated by Assad’s government.

These news outlets failed to mention that al-Nusra Front rebels have been caught before burning civilian evacuation buses while also casting doubt on the accounts of Syrian government sources that blamed a suicide car bomber for the most recent attack. However, these same outlets had no problem condemning Assad for the early April chemical gas attack that occurred in the same province, despite the fact that Assad’s government never claimed responsibility and that evidence has emerged calling the details of the attack into question.

Also dubious is the mainstream media’s continual reliance on only two sources of information from inside Syria – the White Helmets and the Syrian Observatory for Human Rights (SOHR). As MintPress News has reported in the past, the White Helmets are a mercenary-founded and Western government-funded group that collaborates with the al-Nusra Front on a regular basis and has even facilitated street executions of civilians despite their “humanitarian” image.

SOHR, in contrast, consists of just one man: the vehemently anti-Assad Rami Abdul-Rahman, who lives in the United Kingdom. Abdul-Rahman’s “sources” in Syria, from which he receives his information regarding the war, are anonymous and never recorded – thus making them completely unverifiable.

Since the Syrian conflict began over six years ago, most media coverage of the war – particularly that of news organizations from Western and pro-regime change nations – has been noticeably slanted in favor of rebel groups funded and armed by proxy nations with the interest of ousting the Assad government.

Through selective reporting, the omission of key facts and reliance on dubious sources of information, including Western NGOs and rebel groups operating alongside the Al-Nusra Front, these media outlets have sought to twist the facts and whitewash crimes committed by the rebels while ignoring their agenda of ethnically cleansing Syria of anyone who refuses to follow their extremist Wahhabi political ideology. In the process, the media has colored the Syrian crises through a false narrative of Sunni survival against a power-hungry Alawite Syrian government and expanding Shiite Iran – a narrative that was manufactured by the rebels and their proxy nations to justify their insurgency.

Through this sectarian lens, rebels are using a “divide and conquer agenda” supported by the proxy nations that are arming them to target Muslim Shiites, Muslim Sunnis, Arab Christians, Druze, Zoroastrians and other minorities in their fight to destabilize Syria, spread sectarianism and drive the nation into a civil war in order to weaken and eventually oust the Assad government.

The media has worked to flip the narrative to glorify the rebels and frame any atrocities committed by them as having been perpetrated by the Syrian government. The BBC, Al Jazeera and CNN are the most prominent examples.

Such disparities have been commonplace over the past several years. The last month alone has been particularly telling of the mainstream media’s refusal to value the lives of innocent civilians equally, instead only choosing to cover the deaths of civilians in Syria when it supports the long-standing regime change agenda targeting Assad.

Arguably the most dramatic geopolitical event of the year took place earlier this month, when U.S. President Donald Trump chose to bomb Syrian government forces, an act of alleged retaliation for a still-unconfirmed chemical gas attack in al-Qaeda-held Idlib. The attack killed an estimated 58 civilians, including nearly a dozen children. The gas attack received non-stop media coverage, largely because it served as a convenient pretext to further vilify Assad and justify U.S.-led unilateral military action within Syria.

However, higher civilian death counts that resulted from U.S.-led coalition airstrikes went largely uncovered and failed to generate the same level of outrage among these same media outlets, even though they took place just weeks prior.

Considering this, it is no small wonder that viewership and popularity of the mainstream media have reached a historic low, given their propensity to overlook journalistic standards and even manipulating tragedies to sell a particular narrative – whether true or false – to their audiences.