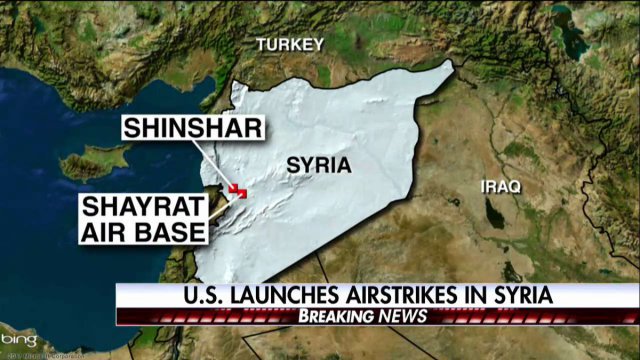 The Syria strikes were only for domestic consumption in order to get the media off his back on his alleged Russian ties. The strikes were purposefully ineffective and changed nothing on the ground. Here is why I think the situation will not escalate beyond small ineffectual strikes.

The media is now full of praise of President Donald Trump. Since Trump became president, the allegation that he’s a Putin or Russian puppet has been unceasing. Worse than the news outlets like the Counterfeit News Network (CNN) are the comedy shows like those hosted by Stephen Colbert and Bill Maher. Colbert has by far been the worst culprit in spreading the myth of Russian interference in US elections. Not once has Colbert seriously considered the utter corruption of Hillary Clinton and the democrats as being the main reason behind Trump’s win. Not once did he have a serious discussion about how the content of the Wikileaks revelations exposing Clinton/democrat corruption shifted American opinion against Clinton.

The CIA, FBI and the rest of the United States’ shadow government have been relentless in trying to subvert Trump by taking out his entourage through allegations that they somehow colluded with the Russian government. This started with the sacking of General Michael Flynn and extended all the way up to Trump’s son-in-law Jared Kushner.

The pressure was intense. On the one hand, Trump’s close associates were being targeted one by one. On the other, he has been incessantly ridiculed for being Putin’s puppet by the likes of SNL, Colbert, Maher, CNN, John Oliver, etc.

This week’s false flag attack on civilians provided Trump an opportunity to get out of this quagmire. Attacking an insignificant military base in Syria and locking horns with Putin provided Trump with all the political ammunition he needed to squash the media’s relentless offensive against him. The media, along with the vile establishment democrats that vilify him, have now been forced to shift their rhetoric of him and have even gone as far as praising him.

“There is much to applaud in President Trump’s decision to attack the Assad regime this week.”

In Glenn Greenwald’s excellent assessment of the turn of events, he wrote in The Intercept that

In every type of government, nothing unites people behind the leader more quickly, reflexively or reliably than war. Donald Trump now sees how true that is, as the same establishment leaders in U.S. politics and media who have spent months denouncing him as a mentally unstable and inept authoritarian and unprecedented threat to democracy are standing and applauding him as he launches bombs at Syrian government targets.

After the strike on Syria’s military base, US media quickly stated that the military base “was all but destroyed.”

The claim however is ridiculous. Just hours after the strike, Syrian military jets were still operating from the base. None of the runways were targeted which would have been a must if Trump really wanted to make the base ineffective. The damage was also minimal. The functioning jets were left intact. Most of the aircraft that were destroyed were 30+ years old, rundown and needed heavy repair. Furthermore, of the 55+ tomahawk missiles that were lunched, only 30% of them hit the base, the rest just fell into the sea or hit deserted areas. Even among those that hit the base, most of them landed on the sides of the base.

So why was there minimal damage? The strikes was made ineffective on purpose. First, it seems that Trump did not want to weaken President Assad or his military. If he wanted to, he could have done much more damage than a slap on the wrist. Second, it seems that Trump, via Russia, already gave out the location of where he wanted to attack thus giving President Assad ample time to move out his more expensive equipment. Here is what Robert Mackey had to say:

A Pentagon spokesman, Capt. Jeff Davis, said in a statement that a pre-exiting “deconfliction” channel, set up to keep American and Russian jets from crossing paths in the skies over Syria, was used to disclose the planned attack to Russia. “U.S. military planners took precautions to minimize risk to Russian or Syrian personnel located at the airfield,” Davis said.

Just look at the so called damage and assess for yourself:

More telling now, however, is what Rex Tillerson has to say about the regime change plans of the US government.

Secretary of State Rex Tillerson joined ABC’s George Stephanopoulos to discuss the evolving U.S. policy towards Syria on Sunday’s edition of ‘This Week.’ Tillerson reiterated that the Trump administration is not seeking regime change in Syria and its “military posture” towards the Assad regime remains unchanged after Thursday’s missile strikes.

“The president was very clear in his message to the American people that [Thursday’s] strike was related solely to the most recent horrific use of chemical weapons,” Tillerson explained.

“he strike was a message to Bashar al-Assad that your multiple violations of your agreements at the UN, your agreements under the chemical weapons charter back in 2013 that those would not go without a response,” he said. “We’re calling on Bashar al-Assad to cease the use of these weapons. Other than that, there is no change to our military posture.”

Trump himself has been noticeably silent, not saying anything. His national security advisor, H.R McMaster, just stated that the US is not going for regime change through military force. Just look what he recently said to the media:

White House national security adviser H.R. McMaster says that while the U.S. would push for regime change in Syria, “We’re not the ones who are going to effect that change.”

“What we’re saying is, other countries have to ask themselves some hard questions,” McMaster said in an interview on “Fox News Sunday.” “Russia should ask themselves, ‘What are we doing here?’ Why are we supporting this murderous regime that is committing mass murder of its own population and using the most heinous weapons available?’”

The only odd ball out here is Nikki Halley. But she has admitted that she has not spoken with Trump regarding military involvement in enacting regime change in Syria. In fact, she doesn’t seem to know what’s going on. She’s just posturing and huffing and puffing on her own.

The likelihood of this war escalating is very dim. Russian President Vladimir Putin has already promised to ramp up Syria’s air defense systems and has effectively shut down military communications hotline with the U.S in Syria. The U.S can no longer forewarn Russia of a coming strike, meaning that next time the US tries to hit the Syrian army, it may risk hitting Russians on the ground.

An all out assault on Syria is impossible without directly attacking Russia. So at most, if the US is to strike Syria again, it will be another slap on the wrist again because anything more will risk hitting the Russians as well.

In conclusion, the weak nature of the strikes, Trump forewarning the Russians (and Syrians) of an impeding strike, Tillerson and McMaster’s comments disavowing regime change in Syria, Trump’s recent silence and Putin’s double down commitment to Syria now makes it highly unlikely that the situation will escalate any further. At most, there may be some strikes in the future, but they will be more or less of the same nature as the one we just had.

The question though remains. We know that the rebels staged a false flag gas attack and it drew a response from the U.S. This will unfortunately give them incentive to do more false flags in order to drag the U.S into a larger military confrontation with Syria and Russia. When this happens, and it will, President Trump will have to choose between holding back or expanding military strikes against the Syrian government. This may help his image for domestic purposes but it will risk an all out war with Russia. Although Trump may be erratic, I do not believe he will opt for the second option because the consequences are just too dire, even for Trump.

Syria is already flying raids out of the base Trump hit, bombing the same civilians he claimed to be protecting. But hey, no more cafeteria! pic.twitter.com/4AQwTlN9gg