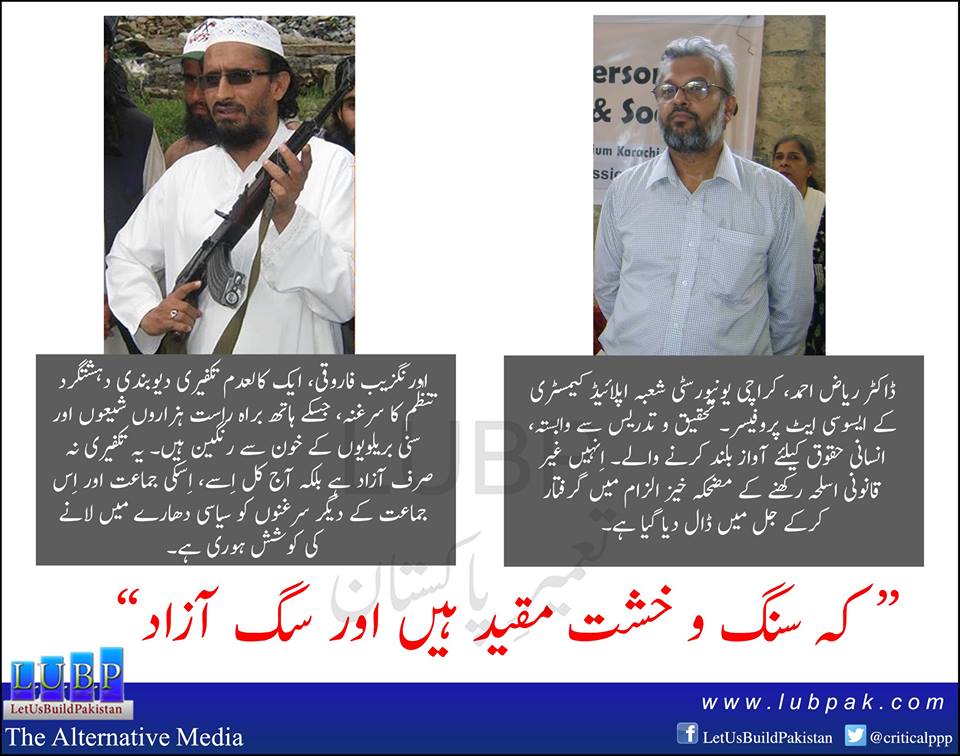 It is a strange irony in Pakistan that those who protest peacefully are silenced by the deep state, while the merchants of hate and death are largely free to stomp across this land with impunity. Take the case of academic and rights activist Dr Riaz Ahmed who, along with fellow educator Dr Meher Afroze Murad, was detained by security forces on Saturday. The two academics were heading to the Karachi Press Club to address a press conference to demand the release of Dr Hassan Zafar Arif — another fellow activist and educator — when they were picked up by the Rangers. While Dr Murad has reportedly been freed, Dr Ahmed has been remanded in judicial custody and a case filed against him for possessing a firearm. A Rangers’ official has said he “personally knew Dr Ahmed for his efforts in creating momentum for the release of bloggers accused of committing blasphemy”.

These are very dangerous, and troubling, charges. Those who know Dr Ahmed can testify that he has always advocated peaceful resistance to oppression, so the charge that he was found in possession of a firearm is highly implausible, and all the more disturbing for that. The professor is a member of the academic council of the University of Karachi, where he teaches applied chemistry; and the treatment meted out to him is unconscionable. This rising trend of treating respected academics as ‘security threats’ by the state is highly disturbing. It should be remembered that Dr Hassan Zafar Arif — for whom Dr Ahmed was protesting — has been in detention since October last year. The bail application of the septuagenarian academic — hauled away for his links with MQM-London — was deferred for the third time on Saturday. In the cases of both Dr Arif and Dr Ahmed, detaining these academics as prisoners of conscience due to their beliefs is reprehensible. The government must stop persecuting activists on flimsy grounds, or else Pakistan will earn the unenviable reputation of being a police state that crushes all peaceful dissent.
Source: