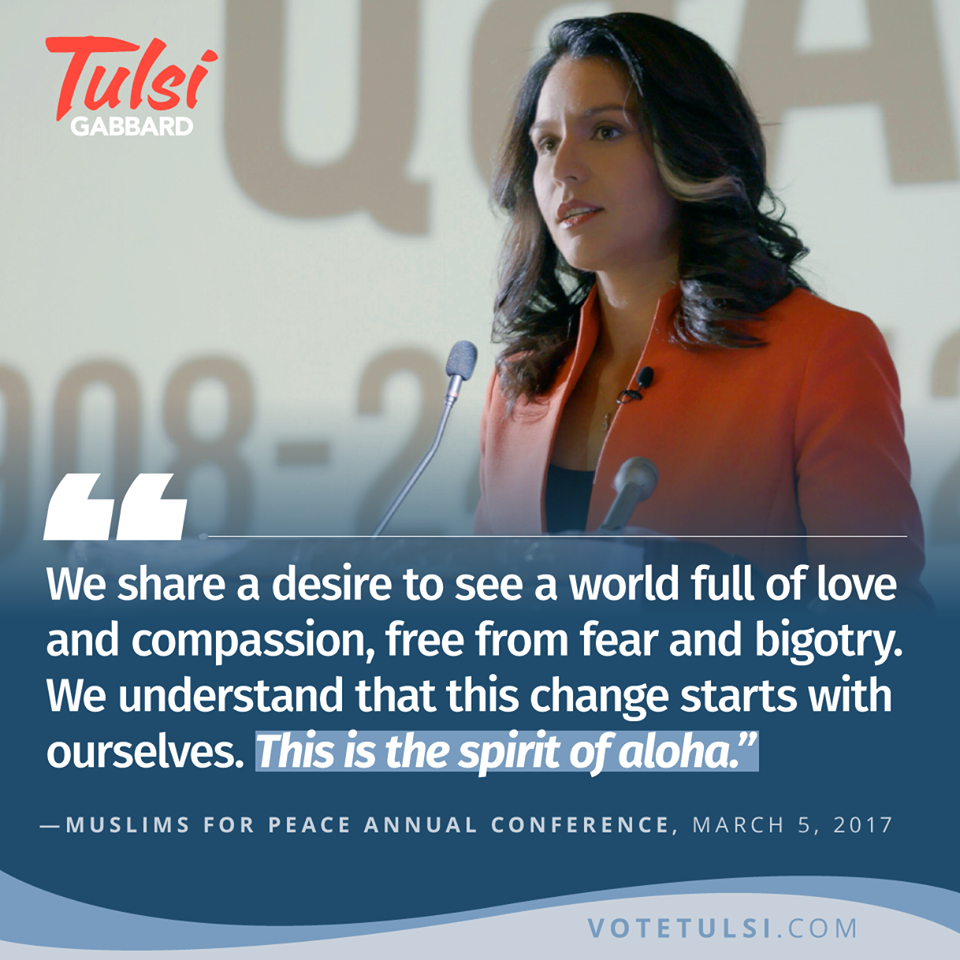 This past Sunday, March 5th, corresponding with the Islamic date of the 6th of Rabi Al-Thani, an event to celebrate the birth of the Prophet of Islam (PBUH) was organized by a New Jersey based organization, “Muslims For Peace”; almost four months after the actual date of the Prophet’s birth, which took place in the Islamic calendar month of Rabi al-awwal. A large number of Muslims, both Shia & Sunni, as well as people from other faiths, attended this Interfaith happening. U.S Congresswoman Tulsi Gabbard (D-Hawaii) delivered the keynote address for the event, which to the surprise of the many in attendance resulted in a tense and contentious atmosphere fomenting chiefly among a segment of the crowd belonging to the Council on American-Islamic Relations (CAIR) and Muslim Students Association; two U.S. Based Salafi organizations that are financed by Qatar & Saudi Arabia. For reasons unbeknownst to many, these folks were quite uncomfortable by the presence of the Congresswoman from the State of Hawaii.

Mehdi Hasan, a loud-mouth lad from London, United Kingdom, who is currently stationed in the U.S as a correspondent for Al-Jazeera, a Qatari Government Media Network, was assigned to share the Dias of speakers. From the very onset of the seminar, his body language towards other speakers in general and towards Congresswomen Gabbard in particular was condescending at best. His attempt to lecture an American audience about the virtues of being a good Muslim in the West was not only hollow and horrendous, but also was gutless and grotesque, both in text and in tone. Mr. Hassan happens to be an employee of a Monarchy that houses Al-Qaida, Al-Nusra and Taliban as its guests with diplomatic status.

While he had the audacity to shame the Muslims of the world for their acts of hypocrisy and gamesmanship, he had no qualms or compulsions about serving the global Wahhabi establishment. He pontificates that the job of Muslims living in the West “is to stand with the truth, with justice, with equality, regardless of where we find these virtues”. He, then goes on to single out Bashar al-Assad and the Islamic Republic of Iran for causing bloodshed and destruction in Syria. Criminally, though, he fails to mention the cluster bombing of Yemen by the so-called Arab coalition Air Force, that is comprised of Saudi Arabia, Bahrain , U.A.E and Qatar. Thousands of indigenous Yemeni citizens have been maimed and massacred by his paymasters. Also, he fails to mention a word about the plight of thousands of Rohinga Muslims, who are being annihilated by the Buddhist forces in Myanmar (Burma). To add insult to injury, a day after the Sunday event, Mr. Hasan posted a statement on his Facebook page (see below post), disgorging disdain and displeasure over the presence of a democratically elected U.S. Congresswoman. This could be an extremely dangerous move on his part, impacting not just him, but also many others who are eager to dance to his malicious music.

In a recent visit to Syria, Ms. Gabbard, the foremost and only non-Muslim advocate of Muslims in the U.S Congress, comprised of 535 members, skillfully assessed the real reasons behind the conflict in the Levant. After visiting war zones in Syria, and by engaging with various segments of that nation’s populace, she was able to conclude that Bashar al-Assad is not the only person to be blamed for all of the bloodshed and destruction in Syria. Rather, it is the monarchies of Saudi Arabia and Qatar who collaborated with Turkey and played a major role in financing and deploying the most cruel and seasoned fighters from Al-Qaida, Al-Nusra and ISIS (Daesh). Is he not aware of the fact that Ms. Gabbard, an American Samoan and a Non-Muslim, is that grand lady, who has been championing the cause of all Muslims, both nationally and Internationally, for the past several years? Does Mr. Hassan, a British citizen, not realize that his ugly utterances against an elected U.S. official can result in serious repercussions for American Muslims?

The real essence of an Interfaith dialogue is to promote goodwill and understanding amongst people of various faiths. “Muslims For Peace”, the organizers of the Sunday conference, accomplished that mission in an outstanding manner. What Mr. Hasan exhibited during that conference and in his subsequent Facebook posting was abhorrent and deleterious to the political and religious fibre of the North American Muslim community. Ms. Gabbard, who belongs to the Hindu faith, has proven to be a fair and formidable advocate of Interfaith understanding. And because of that reality, Mr. Hasan owes a written apology to Congresswoman Tulsi Gabbard !

Blog Posted By Mehdi Hasan:
It was a pleasure to speak at the ‘Muslims For Peace’ event at Rutgers yesterday and I congratulate the hard-working organizers on an important event, though I’ll be honest: I was pretty disappointed to see Congresswoman Tulsi Gabbard also on the list of invited speakers. From my prepared remarks in NJ yesterday:

“Our job is to make it clear to Muslims and non-Muslims here in the West that the so-called Islamic State or other quote unquote ‘jihadi’ groups don’t represent Islam, but nor does the so-called moderate president, but in actual fact, bloodstained Syrian dictator, Bashar al Assad, represent moderate Muslims. Our job is to represent ourselves, not foreign powers; our job isn’t to side with extremist groups or with so-called secular dictators; it’s to stand for justice and human rights, regardless of sectarian or tribal affiliation. And, remember, in times of darkness, you don’t abandon your principles, and you don’t automatically ally with those who might look like your friends, but are really helping your enemies. Your enemy’s enemy is not your friend.”

On a side note, here’s more background information on Gabbard: