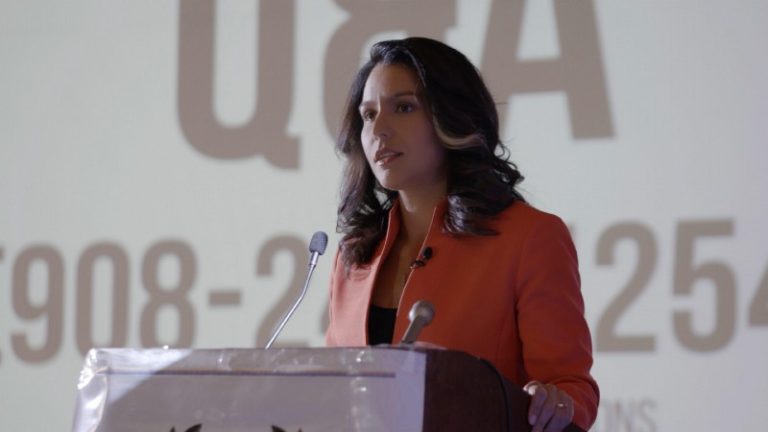 Over the weekend, Muslims for Peace, an interfaith organisation with a proven track record of sectarian and intrafaith inclusiveness, held the 10th Annual Prophet Muhammad Day in NJ.

One of the main speakers was Congresswoman Tulsi Gabbard (D-HI). Rep Gabbard reiterated her commitment to combatting extremism in all religious and sects. Furthermore, she once again highlighted and condemned the murders of leading Sunni Muslim Mystical singer Amjad Sabri who was murdered last year in Karachi by ISIS-affiliated Deobandi terrorist group ASWJ-LeJ. Rep Gabbard also spoke out against the murder of Pakistan’s leading human rights activist Khurram Zaki, the editor of the leading alternate forum LUBP.

In doing this, Rep. Gabbard highlighted not only her own awareness of global issues but a rare sensitivity to the suffering of Sunni and Shia Muslims at the hands of Takfiri Salafi and Deobandi terrorists.

Whwn Rep. Gabbard spoke about the horrific suicide attack at South Asia’s leading Sufi shrine, the Lal Shahbaz Qalandar Mauseleum at Sehwan Sharif, she was probably the only US politician of note to do so.

The Buffoon President Trump cannot even tell the difference between Sehwan and Sweden. As for the Neoliberal jet setters like former President Obama and Hillary Clinton – both of whom tout their Pakistani experience, connections and visits – neither could be bothered to even issue a statement of grief for the attack on Lal Shahbaaz Qalander. Neoliberals in America and their boot polishers in Pakistan are so beholden to the Saudi oil teat that they are simply incapable of acknowledging and bluntly condemning this Takfiri Deobandi attack on the inclusive soul of South Asia – where Sunnis, Shias, Hindus and Christians prayed and congregated in harmony.

Yet again, Rep Gabbard stands apart in her informed and sympathetic views on this topic. The panel of speakers also included the notorious Qatari propagandist and resident Uncle Tom Shia sellout, #Mehdi Hassan.

One can forgive the organisers of this event for their mistake in inviting this Qatari mouthpiece. Even someone as compromised as Hillary has acknowledged that Qatar and Saudi Arabia are the funders and backers of ISIS and Al Qaeda. As per informed sources, Mehdi had assured the organisers that he was a fan of Tulsi and would even like to interview her.

During the event, Mehdi stuck to his Qatari propaganda line which is based on the false binary of equating the victims of Takfiri Salafi violence with the Al Qaeda/FSA/ISIS perpetrators of this violence. It was a speech that was not in line with the tone of harmony and reconciliation and reflected the petty, compromised, sectarian and parochial views of Mehdi’s paymasters.

After the event, Mehdi then proceed to use his media pulpit to launch a vicious sectarian attack on Rep Gabbard. The attack was simply a rehashing of the Neoliberal-Neoconservative slander against Rep Gabbard that target her personal Hindu faith and her opposition to arming Al Qaeda and ISIS in Syria.

The event, its organisers and Rep Gabbard did not discuss Syria at this event. But that was not sufficient for this paid Qatari operative Mehdi Hasan whose rubbish claims on Syria mirror those of the Jamaat Islami and their commercial liberal sellouts in Pakistan.

To the numerous American readers, one needs to find out if a paid Qatari operative who works for the official Qatari propaganda channel #AlJazeera can also demand speaker fees in the US?

Also, how do Americans feel when the supporters of the same Al Qaeda that perpetrated 9/11 then misuse Free Speech to attack the First Amendment rights of elected US Congresspersons?

Lastly, to the witless Uncle Tom Shia sellouts who continue to defend this Qatari propagandist, are you aware that Al Jazeera has hosted Al Qaeda/FSA/Al Nusra/”moderate rebels” apologists that have publically advocated for #ShiaGenocide in Syria?

Media characterisations during the Sehwan terrorist attack may have been exaggerations
Mehdi Hasan: A conscience for hire