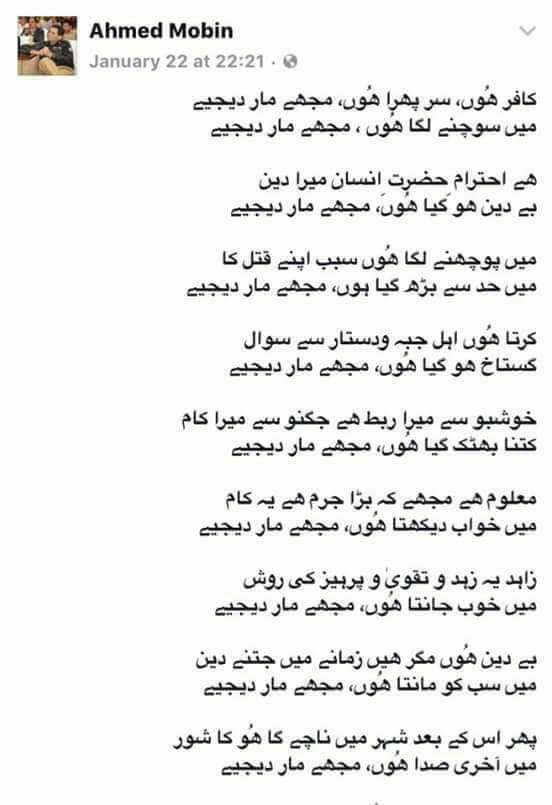 My heart bleeds for the innocent dead and injured. Victims of an insanity which has gripped Muslims all across the globe and not just Pakistan.

What do you expect when billions of dollars are used to indoctrinate impressionable minds with religious texts which are distorted, misinterpreted, taken out of context to suit a particular version of the faith?

How do you undo the madness which in our recent history started in 1975 and is still ongoing?

How do you tell this teeming mass of unemployed, poverty stricken, exploited and desperate humanity in Pakistan that they have a better future?

What a tragic comedy that we have “deradicalization” centers in Fata and KPK which “deradicalize former terrorists” and then we let them back into a highly radicalized society?

Our salvation lies in addressing this challenge on many fronts.

One is clearly better governance which provides hope and succor to the deprived and exploited who fall easy victim and become easy fodder for these purveyors of “Heaven”.

Another is to take back our mosques and madrassas and schools and colleges and universities and media from the clutches of those who promote this terrible poison disguised as religious discourse.

We must address the four key factors which enable militancy and terrorism.

1. The “Thought and belief systems” which drive this.

2. The cause which provides the “objective” the group wants to achieve.

3. 3M. The Money, Men and Materials which equips them to sustain and carry out these attacks.

4. The physical space used by these groups to rest, regroup, survive.

The “Thought” which drives this behaviour vests in an extremely distorted, misinterpreted, misapplied theological framework developed by an 18th Century cleric in the Arabian peninsula and which today is their official religious creed.

Starting in 1975 and still continuing to this day, this violent thought has been aggressively exported to Muslim countries and communities  across the globe backed by over 100 billion petro dollars.

It was further radicalized by 40 years of war in Afghanistan, Iraq, Syria, Yemen, and is now rampant across the Muslim Middle East and Pakistan and in misguided Muslim youth in North America and Europe.

In Pakistan, we have to take back and snatch back, even through brute force all forums and pulpits through which this thought is disseminated to our youth.

Our homes are under threat as these purveyors cunningly use religious Dawa circles and so called “Religious classes” to push through a virulent restrictive misinterpretation of our great religion. They target mothers and women in the house so they can indoctrinate entire future generations.

But we can only do that if we have a strong representative, competent government of integrity.

Our public governance is incredibly weak and fragile. Our institutions, ineffective and toothless because of corrupt politicians and repeated martial laws.

Our current Prime Minister and his daughter are only concerned about avoiding conviction in the Panama Case.  They are totally oblivious, unconcerned and thick skinned to the moral and ethical imperatives of their conduct and guilt.

How can such compromised people provide the leadership this nation needs at this time?

The cause of a Pan Islamic Global Caliphate is of course a mirage but is an extremely powerful magnet for a wide eyed highly testosteroned and angry Muslim young man living in either marginalized societies like Pakistan and most of the wretched world called “Muslim Countries” or a confused individual in Europe or North America with a confused identity.

Not knowing whether he or she is Muslim or Pakistani or Jat or Awan or Rajput or Pathan or Sindhii or Mohajir  or American or Canadian or British etc. Their parents don’t inderstand them, nor speak the language of their adopted lands.

And this lost soul confused about his identity and where he belongs, finds solace and an identity as a “Radical Muslim (Takfiri Deobandis)” in the fiery rhetoric and poison spewed from the pulpits of mosques in London, Birmingham, New York, Chicago, Frankfurt, Toronto etc funded by “Brotherly Islamic countries”.

In our own country, Pakistan, they are subjected to a daily barrage of ‘Religosity” in their homes, schools, colleges, universities. In mosques. In workplaces. In sports. In Entertainment. On TV.

Its so easy to showcase an iconic celebrity who now sports a beard or an anchor who now wears a Hijab. Suddenly tens if not hundreds of thousands are inspired towards Religosity.  Which isn’t the problem and nothing wrong with people becoming religious. But when these impressionable people get into the hands of those who are working towards this “one world caliphate” it’s easy for them to become “Soldiers of Allah”.

Even if they don’t become suicide bombers or violent militants, these “born again zealots” now harbour latent and even overt hatred towards other sects and religions.

And not only are the young overwhelmed with this massive rebranding of Muslim belief, but the middle aged, the elderly, the suave educated urban banker, the corporate professional, the businessman, the college and university teacher, the doctors and engineers. All getting swept away in this tidal wave of religious extremist thought backed by massive relentless indoctrination with unlimited funding.

But what keeps these groups alive and healthy is the funding and financing which gives them the intellectual and physical assets of men, materials, equipments and the weapons to wreak havoc on us.

It is no secret now that the bulk of this financing comes from sources within Saudi Arabia, UAE, Kuwait and Qatar. And from sources in Europe and North America. It also comes from those who want to keep us on the back foot. India definitely.  And most likely Afghanistan, Israel and the USA.

It is supplemented by willing and unwilling charitable donations from within Pakistan as well as the Pakistani expatriates and from criminal activities.

While we can stop sources from within Pakistan, i.e if Nawaz Sharif and Co can stop making deals and focus on the NAP.  But how do we tell our “Brotherly Islamic Countries” to stop exporting and funding this poison? And how do we stop it?

Poor weak and ineffective governments like ours, cede the physical space to these elements to operate with impunity. Our government does not have the competence nor the ability nor the institutional depth, and most tragically, neither the intent to fight them and take back this space.

The Lahore Tragedy is an example of this incompetence.

So really we have very limited options.

And the most immediate one is a change of government, if we can even begin the task of putting things right.