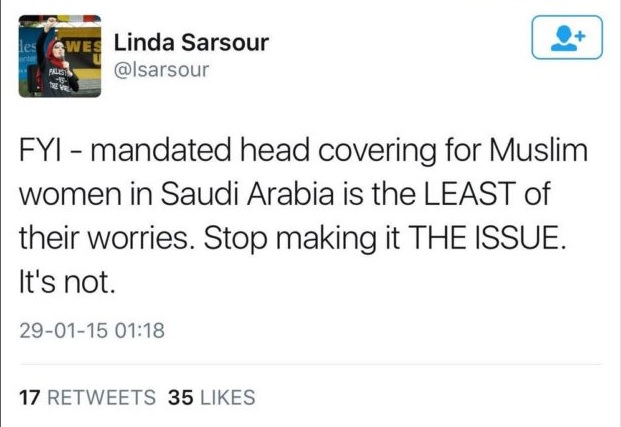 The Women’s March organization is led by a Palestinian-American woman called Linda Sarsour. She is a practicing and Hijab-wearing Muslim. Born in Brooklyn in 1980, she is known as a civil rights activist, co-chair of the 2017 Women’s March and the executive director of the Arab American Association of New York. She has been on the limelight since Trumps election and has faced much criticism and outright slander, such as the accusation that she supports the imposition of Islamic law in America – an outright lie and notion which she considers ludicrous.

As a Muslim woman, she has been at the forefront of the media and has been an inspirational leader for many Muslim American women. Her ability to instill courage among Muslims, especially Hijab wearing Muslims, has been an invaluable contribution from her part.

However, Muslims, especially Muslim women, should still be cautious of such leadership, not for the good such individuals do, but the more problematic baggage that they may bring with themselves. Linda Sarsour is one of those clear cases.

Sarsour comes with a particular political bias that colors her activism and risks infecting unsuspecting American Muslims who are inspired by her. Her political bias can first be seen with her affinity towards CAIR or Council on American Islamic Relations. Sarsour has won awards from CAIR and has publically praised its executive director, Nihad Awad. On one occasion, she even called him “uncle Nihad,” a term of endearment that is used by people of Middle Eastern and South Asian background.

CAIR faces a double problem. On the one hand, it is a contingent of the extremist Muslim Brotherhood in all matters except in name. On the other hand, it is a Saudi funded organization, and as such, is politically aligned with the country’s despotic Wahhabi extremism that is antithetical to any sense of human dignity. As an organization, CAIR also supports Wahhabi extremist terrorist groups in Syria who seek not only to topple its government, but also commit genocide against its Alawite, Shia and Christian minorities. As CAIR supports freedom of religion in America, it supports an intolerant and genocidal Saudi ideology across the spectrum of the Muslim world.

Sarsour has been on the same bandwagon. She regularly praises Saudi Arabia and its policies in her twitter account. She also supports foreign intervention against Syria as well as the FSA (Free Syrian Army,) a conglomerate of al-Qaida-like Wahhabi extremists whose mission is to cleans Syria of all its non-Sunni population. She has made her hatred of its president Bashar al-Assad public. In one tweet, she claimed that President Assad not only makes her blood boil, but makes it spill over. Ironically, the Saudi ruling elite and the dictatorial regimes that are allied with it do not seem to irritate her despite the fact that they have caused the deaths of millions of Muslims through their instigation and funding of Muslim civil wars.

For those Muslims who wish to continue joining these marches, they should do so by all means. But they should be wary of making the mistake of turning its Muslim leadership into hero vignettes that are without conflicts and human interests. Like calcification, heroification, as James W. Loewen notes in his Lies My Teacher Told Me, will inevitably lead to a degeneration and whitewashing of reality.

The Clinton foundation is dying and why this is good news for women and children
Saudi Invasion of Yemen – Ali J. Zaidi