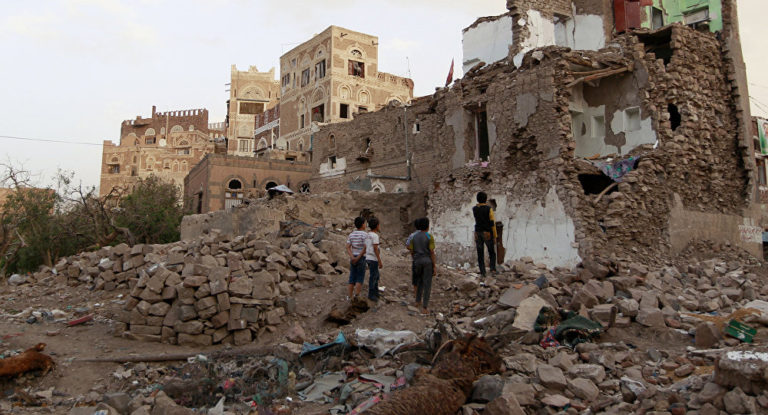 Saudi Invasion of Yemen with the help of West, Kuwait, Qatar, Sheikhdoms and some other undeclared Muslim countries is one of the worst kinds of atrocities in the recent history. Saudis have been committing war crimes in Yemen with impunity. More than 25000 have died, many more have been grievously wounded and the country is being swept by famine. Yemen, one of the poorest countries on the globe, has been reduced to a pile of rubbles.

Saudis want to install a puppet Govt which had no support and was kicked out of the office by the people. As the so called Arab spring swept through the Middle East, destabilizing longstanding governments, (except Saudis and Sheikhdoms) Yemen was also affected and massive demonstrations eventually forced President Ali Abdullah Saleh, who reigned as undisputed despot for thirty years, to resign in favour of his Vice President Abdrabbuh Mansur Hadi. It was not long before Hadi, too, was driven out of office and forced to flee. Houthis took over the capital, Sana`a and declared the establishment of a revolutionary Committee. Hadi fled to Aden.

In 2015, Saudis invaded Yemen, declaring their support for Hadi and started bombing Sana`a and the Houthis strongholds in the North. They also received unconditional support from Washington in spite of the known fact that fifteen of the nineteen 9/11 hijackers were Saudi citizens and Saudis have long been the main perpetrators of the ideology of “radical Islamic terrorism”, funding radical mosques and their demagogic Imams and setting up madrassas that spread the doctrines that energise terrorist organisations.

How does it serve the “civilised West” to give unconditional support to a country that has birthed more terrorists than any other Muslim World?

Let us wait and see whether Trump puts “America first” or “Saudis first”.