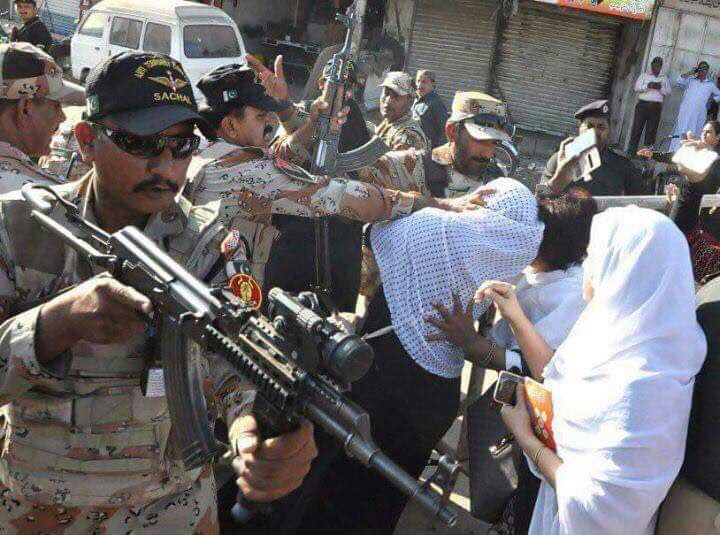 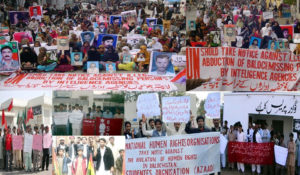 Freedom of expression is the constitutional right of every citizen under Article 19 of Universal Declaration of Human Rights, but Pakistan is well known for violating basic human liberties and is notorious for its dictatorship and sometimes extremist mindset. Under Nawaz Sharif’s regime, the last few years of PML-N government and military establishments have made the scenario worse by snatching the basic human rights of freedom of expression and freedom of press. Karachi and Baluchistan are the prime victims of these very establishment policies. Although both communities are facing discrimination in education and jobs in government sectors for decades, in the past few years discrimination is on rise. Large number of innocent civilians and political activists including intellectuals and journalists have been abducted and killed by military establishment for raising their voices. Large number of women serving as political activists have been raped and killed. Numerous abducted victims are still missing or are under custody of law enforcement agencies. Political representations of both areas have no rights for any political activities such as public meetings, rallies or press conferences. 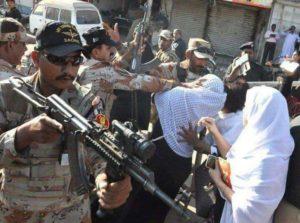 A few weeks ago, for example, several bloggers and free thinkers were abducted and are still missing. These human rights activists include Professor Salman Haider (a teacher in Fatima Jinnah University), Ahmed Waqas Goraya, Asim Saeed and Sammar Abbas. Several media sources have claimed that the military establishment is involved behind this incident. This incident stirred outrage across Pakistan, resulting in huge demonstrations taking place in various cities such as Islamabad, Karachi, and Lahore. A few public representatives who were kept silent regarding the genocide in Baluchistan and Karachi finally raised their voices in the Parliament only to fall on deaf ears.

These bloggers were well-known for criticizing the government policies that support and promote terrorists and extremist elements, endorse terrorism in neighboring countries, and ignore human rights violations including abduction, killing, and raping of innocent civilians. On the other hand, the PML-N government provides complete freedom to terrorists and sectarian extremists. They are flourishing with establishment support, freely pursuing activities such as conducting hate speeches, attacking religious gatherings, and orchestrating sectarian killings. A few weeks ago, Ahle Sunnat Wal Jamaat (ASWJ) organized a public gathering in Islamabad by violating section 144 in which speakers have given hate speeches and chanted slogans against Shia Muslims freely without interference by law enforcement. Moreover, Election Commission of Pakistan (ECP) allowed a sectarian extremist, Masroor Jhangvi, to contest in Punjab provincial elections which he won, with the support of banned terrorist organizations. Jangvi even received a peace shield from federal minister Sardar Yousuf. 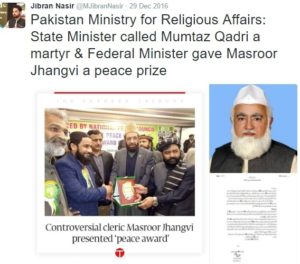 The situation is not much different in capital of the country, Islamabad, where a well-known terrorist, Molvi Abdul Aziz, has faced trial for killing army officers. Aziz is currently sitting in the famous Lal Mosque challenging the state and boasting that he has numerous suicidal bombers and fighters working under his supervision. Aziz also runs a radical Madrasah (school for Islamic instruction) called Jamia Hafsa where his students openly support ISIS. He also refused to condemn the Army Public School (APS) massacre in Peshawar and even passed a fatwa against soldiers fighting against Taliban terrorists. Despite all of his illegal activities, he is residing in Islamabad, conducting inflammatory speeches with no objections whatsoever by law enforcement. The general public has held multiple demonstrations against him but to no avail. 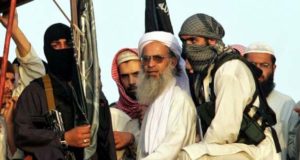 Rather than taking action against terrorist groups, government and establishment are continuously targeting social workers, political leaders and workers, human rights activists and free thinkers.  After repeated condemnation from the global community and massive civilian anger towards the establishment and government’s sins, they continue their policies and neglect basic human rights for personal gain and promotion of twisted ideals. 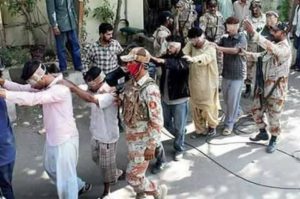 It is obvious that the very government and military establishment are becoming the biggest enemies of their own nation. They should revise their policies or the country might pay the huge price of facing complete isolation and boycott from rest of the world. Despite being one of the nuclear powers in the region, Pakistan could not represent itself and its populace as responsible thus far. Now the recent abduction of bloggers further distorted the country’s image including it among the list of worst dictatorships like Saudi Arabia and other Arab countries that have no signs of freedom of expression. In Pakistan, whoever raises their voice against the state policies get abducted or killed. If the Pakistani establishment keeps following the foot prints of these Arab countries, the nation might face a massive irreversible disaster like Syria or Iraq and Pakistan will cease to exist.