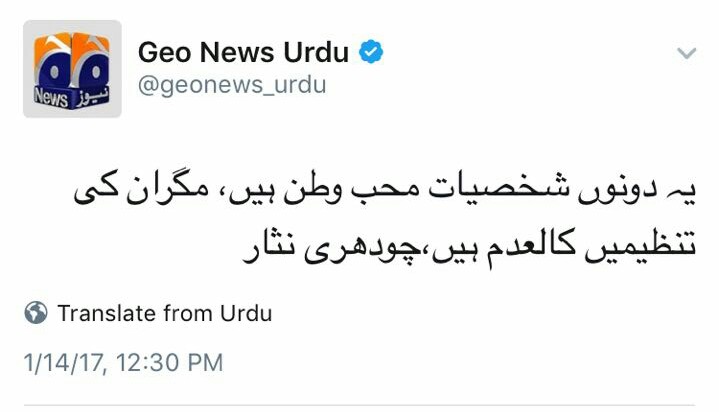 Chaudhary Nisar once again equating victims and perpetrators. Ludhiyanvi is a known hate preacher who calls for Shia genocide openly. He openly ridicule the law of the land by doing takfir. Where have anyone seen shia alim giving verdict of massacre and where have we seen any shia organized group being involved in act of terrorism.

Nisar is indirectly supporting saudi policy of marginalizing a persecuted community in Pakistan at the hands of Sipah Sahaba, ASWJ, LeJ, TTP, Taliban by creating misshaped false binaries. This is not new, continuous victimisation of vocal voices against Shia genocide forces us to think something malformed is at play. From assassination of Khurram Zaki to abductions of Samar Abbas, Salman Haider, Faisal Abidi and others vocal voices.

Nisar even specifically gave a threatening statement on floor of the house saying that he know well our details, when Khurram Zaki and I were in Islamabad trying to get a case registered against Abdul Aziz for his continuous attempts to divide national institutions on sectarian grounds. Jibran was also trying to get a similar case registered against Abdul Aziz. These cases were never registered and Khurram Zaki was assassinated while he was planing for a petition in Supreme Court.

People like Nisar or forces with hidden hands who are constantly trying to streamline banned Takfiri terrorist groups in Pakistan by branding them as moderate are part of same saudi policy in Syria which legitimize support for ISIS and Al-Nusra by branding them as moderate rebels. Same agenda which Tahir Ashrafi and some comercial liberal lobbies are often seen pushing in Pakistan.

The Decline of Human Rights and Social Order in Pakistan – by Muhammad Faisal Younus
Who is abducting Social media Activists?