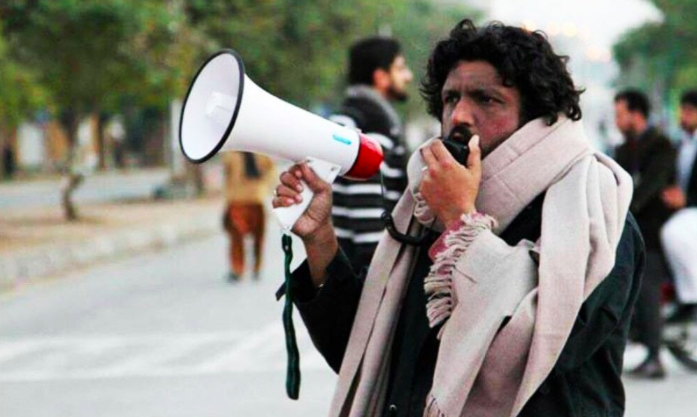 Political workers, students, intellectuals, writers and the oppressed minorities are facing forced abductions in Pakistan. We must raise our voices on this issue. In the past three days four Social Media Activists have been abducted from Central Punjab and Islamabad. This is a premeditated campaign by the State to subvert dissent on Social Media after the State has established complete control over mainstream media. Clearly the Nawaz Sharif Government in the Center and Provincial Government of Shahbaz Sharif are responsible. LUBP demands that all abducted bloggers should be recovered and reunited with their families immediately.

Professor Salman Haider of Fatima Jinnah University in Islamabad was a poet, playwright and social worker. He was abducted while returning from Bani Gala to Islamabad with a group of friends. A former intelligence officer, on condition of anonymity has disclosed to LUBP, that there are certain black sheep in the Nawaz Sharif Government who will not tolerate dissenting opinions. Salman, along with other bloggers was quite outspoken. These media monitoring goons were unhappy with Salman’s brother Zeeshan Haider who worked for an international media organization. The thugs of Nawaz Sharif and his Takfiri Deobandi allies of Sipah Sahaba, a banned pro ISIS organization that the Sharifs have made political alliances with consider it their religious duty to suppress any dissent to Caliph Nawaz Sharif.

Zeeshan Haider, who broke the news of his brother’s abduction to Geo and other mainstream media organizations, added that his brother suffered from severe allergies, and his life maybe in danger without proper medication. He added that a joint investigation was underway by the authorities and Salman maybe returning soon.

It appears the Salman Haider’s friends and family has been subjected to a lot of pressure. They are not talking to media or taking any action. Some of Salman’s friends and colleagues wanted to stage a protest in Islamabad but on requests from the family the protest was postponed.

Besides Salman Haider, Waqqas Ahmed Goriya, Naseer Ahmed Raza and Asim Saeed have also been abducted. According to Dawn, Naseer Ahmed Raza is a polio victim was abducted from his family shop and the abducting officers did not disclose which agency they worked for. Waqqas Goriya who is a dual Pakistani and Dutch citizen was abducted on January 4th.

LUBP, currently blocked by the major Internet service providers, explicitly by the Nawaz Sharif government and their Takfiri Deobandi allies headed by Tahir Ashrafi in the media, intends to fight on. We fight on in the memory of our slain editor Khurram Zaki and martyred blogger Ali Khudi:

Several other former LUBP bloggers have been silenced by such heavy handed tactics by the pro Takfiri Deobandi black sheep in the State of Pakistan and various Takfiri Deobandi groups that have now become part of the Sharif Government.

Salman Haider, Waqas Goriya and others have all contributed to LUBP, although LUBP had disagreements with some of these bloggers we respect their right for free speech and we will continue to fight vigorously for their right to free speech and their freedom.

It is a wider crackdown against voices of dissent. Salman’s case got noticed because he was from a well-connected family. Two of his brothers are journalists – one of whom works with BBC. There are at least four confirmed cases of missing activists – mostly secular voices. But, the numbers could be as high as nine. This type of crackdown is only possible with in complicity of the government and their Sipah Sahaba Deobandi allies.

Families are being told by Pakistani authorities not to agitate the matter in the media. There are several other cases, where activists have been picked up over past few months, but never got reported.

Syed Maratab was one such case, who was kidnapped by an intelligence agency. He had made anti-Daesh (ISIS) posts.

Families of missing activists have been maintaining silence for the sake of safety of their loved ones, who have been unlawfully abducted by state, while terrorists & hatemongers roam freely in an increasingly radicalized society.

The four activists that went missing last week had been running Facebook pages Mochi, Roshni, Bhensa and the pages have been taken down now. Further some other pages secular voice pages have been deactivated quite possibly out of fear. All of this while Takfiri Deobandi or pro ISIS Deobandi Sipah Sahaba pages thrive. 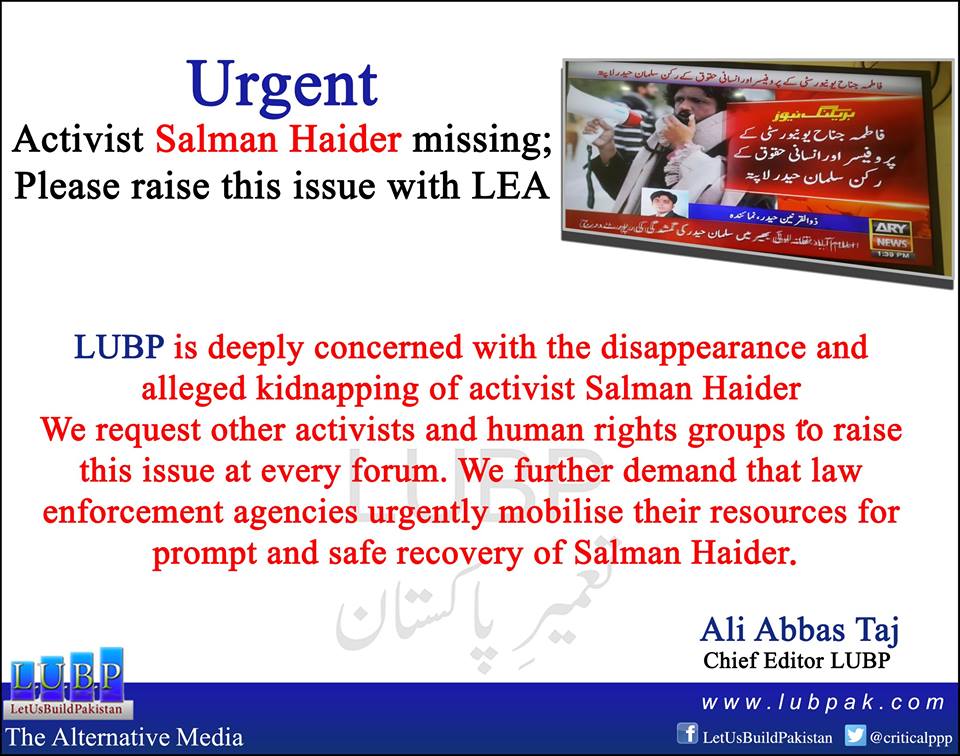 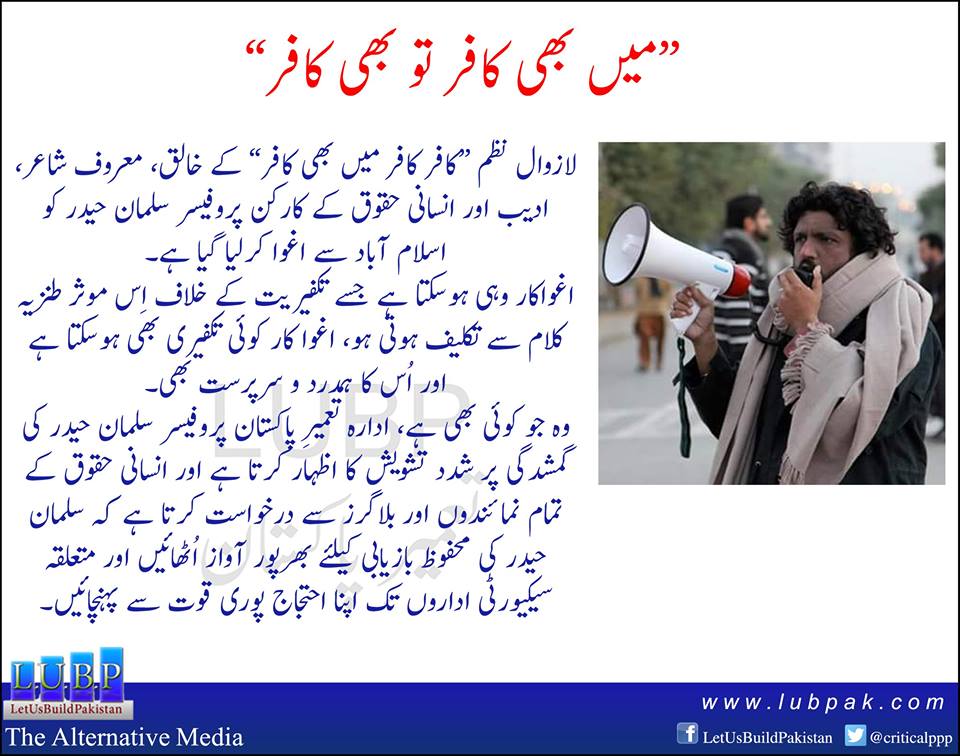