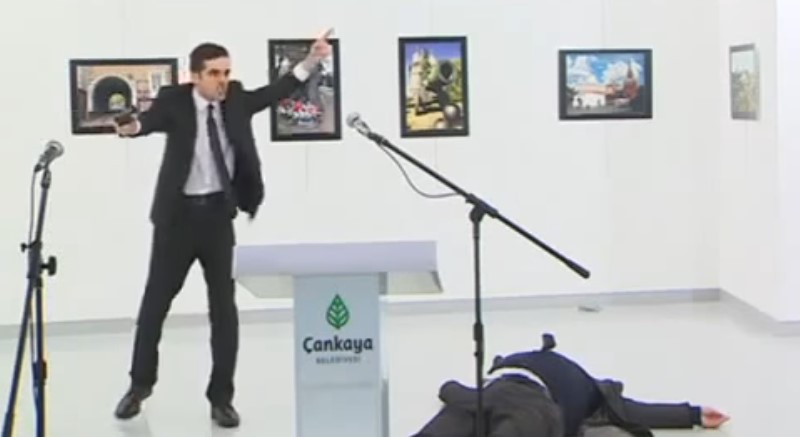 What this means is one of two things:

Version 1: there was nobody in charge of security at this exhibition

Version 2: the room where this murder happened was considered ‘safe/sterile’ because it was inside an outer security perimeter which we don’t see in this video.

I find version 2 far more likely.  That would also explain why and how Mevlut Mert Aydintas so easily got it: he simply flashed his police ID and was let through.

When such an event occurs it is also important to ask cui bono – whom does it benefit?

I see absolutely no imaginable reason why Erdogan would want the Russian Ambassador murdered in Ankara, but I can easily imagine a long list of reasons why he would not want that to happen at all.  Some will correctly say that the fall of Aleppo is a humiliating defeat for Turkey and Erdogan, and I agree.  But I would remind everybody that Erdogan clearly had a deal going with the Russians and the Iranians when he moved his forces across the border and occupied northern Syria.  There is *no way* he would have risked such a move against the will of Moscow and Tehran.  So what was this deal?  We will probably never know, but it clearly included a provision which limited Turkey’s actions to a narrow strip in the north.  If that hypothesis is correct, then Aleppo would have to be considered outside the “Turkish sphere of interest” in Syria, at least by the tripartite Turkish-Iranian-Russian understanding.  Did Erdogan know that Aleppo would fall and would fall so fast?  Probably not.  It appears that Erdogan got outmaneuvered by the Russians and the Iranians.  But he most definitely had better options to retaliate against the liberation of Aleppo than to have the Russian Ambassador murdered in Ankara.  The fact is that the Turks did precious little when Aleppo was liberated, at most they helped the Russian evacuate part of the “good terrorists”.

Even if Erdogan is a lunatic, he is smart enough to understand that if he has the Russian Ambassador murdered in Ankara NATO will do nothing to protect him and that the Russians can fire a cruise missile right into his bedroom window.  Erdogan might be crazy, but he is clearly not *that* crazy.

Finally, let’s remember the disastrous consequences for Turkey following the shooting down of the Russian SU-24 and the fact that, by numerous corroborated accounts, the Russian intelligences services saved Erdogan, probably literally, by warning him of the coup against him.

So, for all these reasons, Erdogan is not on my current list of suspects.  Never say never, new facts might come to light, especially with a maniac like Erdogan, but right now I will assume that he has nothing to do with what happened.

Well, it is rather obvious that the Daesh & Co. had an extremely long list of reasons to want to kill a high profile Russian official.  So yes, they sure had the motive.  Considering how successful radical Islamist extremists have been at penetrating the Turkish deep (and not so deep) state, Daesh and Co. also had the means.  As for the opportunity, the video above clearly shows that not only did Mevlut Mert Aydintas have the time to shoot the Russian Ambassador many times (I counted 9 shots), but after that he still had the time to just stand there and scream all sorts of slogans about Syria, Aleppo and God.  While we don’t know all the details yet, this is already very strong evidence that security at this event was dismal.

Yes, they are also on my list of suspects.  The Gulenists have nothing to lose, the CIA has gone crazy with anger and fear at the election of Trump, and the Obama Administration is full of angry, offended, deeply vindicative and otherwise plain nasty characters who would love to trigger a new crisis between Russia and Turkey or make the Russian pay in some way for humiliating the AngloZionist Empire in Aleppo.  Keep in mind that this is exactly how the CIA always kills foreign dignitaries: by subcontracting the murder to a local fanatic so as to preserve what they call “plausible deniability”.

During the Cold War the Soviets and the Americans had an unwritten understanding that “we don’t kill each other”.  It was never formally mentioned or otherwise acknowledged, but I assure you that it was real: neither side wanted an open ended escalation of assassinations and counter-assassinations.  But today’s CIA is a pathetic joke compared to the CIA of the Cold War, and with hodge-podge of mediocre dimwits now in the Executive branch I would not put it past some idiot in Langley to approve of the murder of a Russian Ambassador.  Besides, if the Americans were crazy and reckless enough to attempt to overthrow Erdogan, why would they not try to murder a Russian Ambassador?

What about the lone gunman hypothesis?

Well, it is impossible to prove a negative. Mevlut Mert Aydintas did lose his job in a recent purge, he did have police credentials and his actions on the video seem to be a textbook example of the kind of fanatical behavior a lone nutcase would display.  So yes, it is possible that Mevlut Mert Aydintas acted alone.  After all, all he needed was a gun and a police ID.  Let’s see what the Turks, and the Russians, find out about him.  Still, I doubt it.  That kind of personality is usually identified by state sponsoring terrorism and then activated when needed.  My gut tells me that he did not just act alone.  Somebody probably used Mevlut Mert Aydintas.

Here I really hope that I am wrong, but if I want to be honest I have to admit that I am completely unable to find an excuse of the lax security around Ambassador Andrey Karlov.  And I am not referring to the Turks here, I am referring to the Russian security services.  Here is why.

Even if we assume that the Turks had told the Russians that they had established a ‘safe/sterile’ perimeter around the exhibit and that the general public would not be let in, the footage shows what appears to be only a few guests, there is no excuse for the Russian not to have at least one bodyguard in the immediate proximity to the Ambassador.  Turkey is not only a country at war, but Russia is a party to that war, the Takfiris have made a very long list of threats against Russia and, finally, Turkey is a country which has suffered from terrorism for years and which has just suffered a bloody attempted coup.  In a country like that a top official like an Ambassador should have been protected by an entire group of bodyguards, but in this case there was clearly nobody.  Oh sure, the Russian can blame the Turks for having set up a crappy perimeter, but as professionals they should know that the Turks are already having extreme difficulties in dealing with their own terrorists and that following the massive purges the security services are in a state of chaos.  Would one bodyguard have made a difference?

From the video it appears that Mevlut Mert Aydintas was standing about 5 meter behind Ambassador Karlov when he opened fire.  Apparently, not a single of the shots hit the Ambassador’s head.  If Ambassador Karlov had been wearing a flack jacket or any other type of body armor he would have probably survived that first volley of bullets (unless one hit the cervicals).  One single bodyguard could then have easily killed Mevlut Mert Aydintas and evacuated the ambassador to safety.  Evidently Karlov was not wearing any kind of body armor that day.  Why?  He did not have a single bodyguard next to him.  Why?  No Russian voices are heard on the video, so there appears to have been no Russian security anywhere near the ambassador.  Why?

Normally, ambassadors are a very easy target.  Everybody knows them, their routine is public and, contrary to what many seem to think, most of them have no security detail.  I am absolutely amazed that more ambassadors are not killed regularly.  In high risk countries, however, ambassadors are normally protected, especially ambassadors representing countries involved in a war or who are likely targets of terrorist attacks.  True, as a rule, the Russians, including diplomats, tend to be more brave/reckless (pick the term) than their western counterparts: they don’t scare easy and they like to show that they are not afraid.  But that kind of attitude needs to be kept in check by professionals.

Frankly, it makes me angry to see how many Russians have been killed by that lax attitude towards personal risk and security.  Yes, it is very noble to be courageous, but to die killed by a manic is also plain dumb.  I would feel much better if Russian officials and politicians would be a little less courageous and a little more careful.  Because what happened today begs the question: who will it be the next time?

What happened today is a tragedy made twice as painful by the fact that it could probably have been avoided.  The Turkish security services will probably arrest overnight pretty much anybody and everybody Mevlut Mert Aydintas has ever met, and they will get lots of confessions.  I am pretty sure that they will share a lot of that data with the Russians, if only to show how sorry they are.  Alas, both the Turks and the Russians have an long tradition of secrecy and we might never find out who, if anybody, really was behind Mevlut Mert Aydintas.

The only thing I am sure of is that Putin will do nothing harsh regardless of who is behind this murder.  If it is the Takfiris, then the people involved will die in the next couple of years.  If the CIA is involved, however, the Russians will be much more careful and might chose to act in a very different way, possibly through the next Administration.  The murder of Ambassador Karlov will not succeed in derailing the Russian and Iranian efforts at getting some kind of a regional solution to the war in Syria, nor will it change the Russian determination to prevent the AngloZionst Empire of turning Syrian into yet another Takfiristan.

As for Russia and Turkey, as long as Erdogan remains in power they will continue to try to collaborate against the odds and in spite of deep and fundamental differences.  Neither Russia nor Turkey, which have fought each other in twelve wars, have any other option.

The assassination of Russian Ambassador in Turkey: A few points to ponder – by Syed Hasnain Baqri
Deobandi Taliban from Afghanistan to Global terrorists