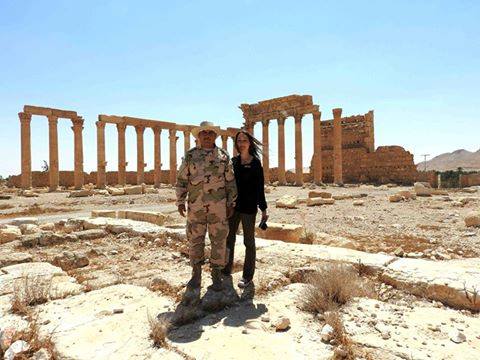 Dear hacks, paid and amateur, you who write from the comfort of an armchair. You have more than a few facts wrong about me, as do your colleagues in the paid-business of promoting the NATO line on Syria.

For all of the hacks, the most ironic point is that you write authoritatively without likely having visited Syria, let alone since 2011, let alone for many collective months, as I have since early 2014, travelling to many key places (no, not to your head-choppers, that I have not done. I see no need to validate mercenaries sent to slaughter Syrian civilians). For some of those visits:

The other most obvious point is that whatever hack you are, Snopes, Buzz or merely an armchairactivist making snide comments about anyone who stands with Syria’s sovereignty, for those in the journalist field, you are probably making more per trashy, defamatory, unsubstantiated and factually-incorrect article than I make for 6 times as many articles (assuming you get a mere $300 for your smear piece. If you are netting more than that, the difference in our incomes increases dramatically).

Writing truth doesn’t pay. Independent sites which are courageous enough to host the truth usually cannot afford to pay more than $50/article, or often nothing at all. But for those who have principles and are not writing about Syria and related issues for profit, this is irrelevant.

So the obvious question that hacks have assumed they know the answer to: how do people like myself and colleagues manage to exist, if not being paid ridiculously-well per article as some others writing lies are.

In order to go to Syria many times, I have either saved money slowly and when able travelled to the country, or I have publicly fundraised. I travel the cheapest means, always with long layovers and inconvenient routes, but ensuring airfare that is far cheaper than those travelling to Syria to cover for corporate media. Then again, that’s me making an assumption: perhaps they also flew economy from North America to Dubai (much further east than destination Beirut), slept on the airport floor, travelled back west to Beirut, stayed in the cheapest closet-sized rooms in the city or outside where it is cheaper, and took a shared taxi to Damascus.

I recall my first time applying for a visa at the Syrian embassy in Beirut. This was following my very first trip to Syria which was an international peace delegation. Applying for my visa, for which I paid, I remember seeing a French journalist who arrived that day, submitted her application and was told to return the following day to pick it up. She was quite likely someone who had already gone through the process. I was not. I applied and waited well over one month before I was finally granted my visa. This is protocol and I don’t hold the lengthy wait against the government of a country which is being warred upon.

This is how then played out on subsequent trips to Syria: waiting the over one month wait while in Lebanon and finally paying for the visa, taking the shared taxi to Damascus, and finding accommodation on my own in the old city of Damascus, for which I paid. Internal travel I paid, including expensive trips to Aleppo and expensive accommodation in Aleppo.

Compromised journos, it is far less expensive, tiring and dangerous for you to write from your home/office.

I’m aware of many colleagues like myself who live on the edge, sometimes down to the last $$ in their pockets until a meagre payment comes in for an article many hours/days worked on. Many I know have had to borrow money, as have I, in order to travel to Syria, or fundraise, or wait until we accumulate enough through writings and also the kind donations to our work by people who recognize truth when they read it.

For all those hacks who would continue to detract from the content of our writings/interviews by saying our analyses match that of the Syrian government and Russians, and thus in their own opinion, we are “paid agents” of either or both governments… you are grasping at straws to discredit people who themselves haven’t sold out for a paycheck. You also clearly do not know what Syrians want for their country (no, I do not include the small minority of wahhabi-indoctrinated, paid mercenaries, or even smaller percentage of Syrians who believe they are living a ‘revolution’), which doesn’t include the narratives you present.

Finally, in terms of your credibility, quoting the usual NATO aligned suspects (HRW, AI) and the compromised and failed institution of the UN (which has a representative of Saudi headchoppers for their Human Rights Commission), you can cite SOHR and Syrian Network for Human Rights and Violations Documentation Center all you like. It doesn’t make your statements factual. On the latter two outlets, please read:

Jay Tharappel looked at two of the other prime groups cited regarding casualties in Syria: the Syrian Network for Human Rights (SNHR) and the Violations Documentation Center (VDC).

He noted that neither of the groups “are ‘independent’ in the sense that they function merely to provide facts, they’re all open about their agenda to overthrow the Syrian government…and for the imposition of a no-fly zone on behalf of the ‘moderate rebels’, whoever they are.”

Further, according to Tharappel, “the SNHR doesn’t provide any evidence to substantiate its assertions about the numbers killed by government forces. They claim to have ‘documented [victims] by full name, place, and date of death,’ however none of these can be found on their website.”

Regarding the VDC, he wrote, “there are good reasons to believe the VDC is listing dead insurgents as civilians, as well as mislabeling dead government soldiers as FSA fighters.”

One example he cited was the listing of a Jaysh al-Islam militant, ‘Hisham Al-Sheikh Bakri’, killed by the SAA in Douma (infested with Jaysh al-Islam terrorists), in February 2015, which al-Masdar News reported. The VDC also listed ‘Hisham Abd al-Aziz al-Shaikh Bakri’, “however this one is listed as an adult male civilian and not a Jaish Al-Islam fighter,” Tharappel wrote.” [from my: http://dissidentvoice.org/…/deconstructing-the-nato-narrat…/ ]

Regarding an assertion about those supposed torture photos, please read:

Regarding an assertion on massacres, he’s covering for his mercenaries, whether FSA, Nusra or any of the factions in between. see:

In closing, I will never apologize for my solidarity with the Syrian people and their sovereign right to fight terrorism and restore the peace and unity that the country knew prior to the 2011 invasion of mercenaries and their US/Nato/Zionist/Turkish backers.