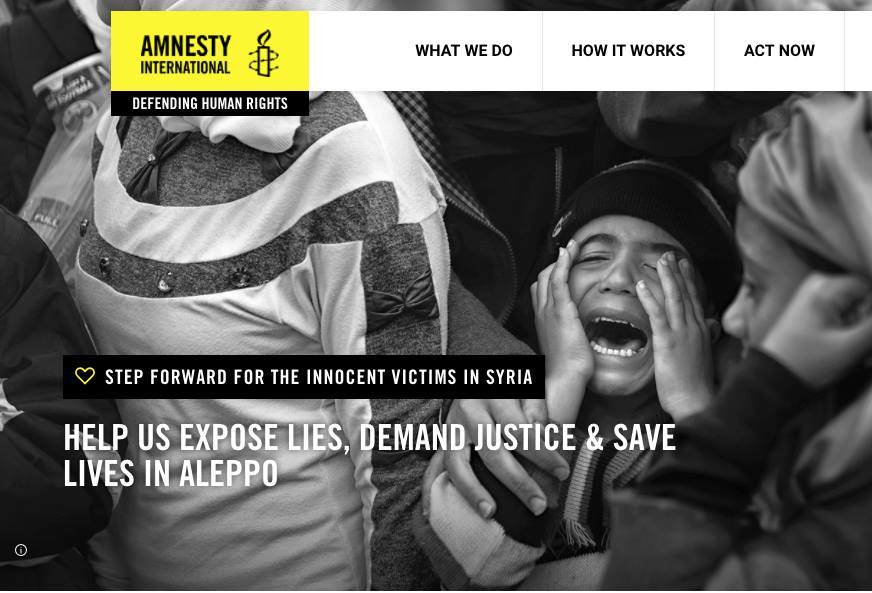 If you visit the Amnesty International web site, you will be overwhelmed by the slogans dominating its front page. One slogan cries out:

“Demand the safe evacuation of people from Aleppo.” Another one shouts:“Help us expose lies, demand justice & save lives in Aleppo.”

To its donors, the Amnesty International has been sending emails to donate for the people of Aleppo.

Does it sound familiar in the context of the Middle East?

And who are the people of Aleppo, by the way? Apart from some photos and details that the likes of the BBC, CNN and Fox have been faking, there is nothing concrete that Amnesty can offer. “The Al-Qaeda” and ‘the Islamic State” do not appear in the canard that Amnesty has been pedalling as truth.

In April 2012, the Amnesty International released to its readers and donors pictures of “craters” in the city of Anadan claiming:
“Images from Anadan revealed more than 600 probable artillery impact craters from heavy fighting between Syrian armed forces and armed opposition groups.”

It went on to claim:

“Turning Syria’s most populous city into a battlefield will have devastating consequences for civilians. The atrocities in Syria are mounting already.”

Not even once has the Amnesty said that the ‘rebels’ are in fact Islamic State Takfiri terrorists. Whether its vociferous blaming-the-victim discourse has stupefied or will stupefy its donors and subscribers into giving it money is a matter that we are not aware of. But we can say with confidence that some of its supporter will reconsider their views about it. The money the Amnesty International wants to collect will be remembered as blood money just like the blood diamonds of Africa. The money given to the Amnesty International will be instrumental in shedding innocent blood of the civilians of Syria.