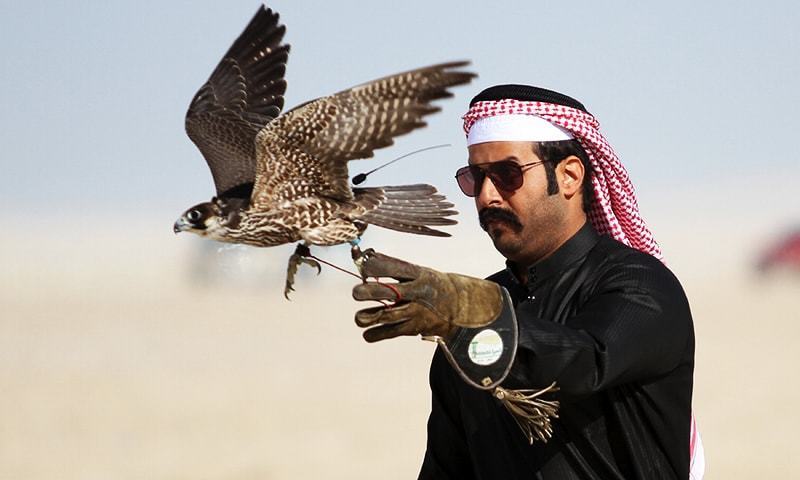 MULTAN: Chickpea farmers clashed with police in Mahni area of Mankera tehsil, in Bhakkar district, over damage to their crop caused allegedly by members of the Qatari royal family hunting houbara bustards.

After pronouncements were made through loudspeakers, the protesters gathered in Mahni and started marching towards the camps of hunters, but the police stopped them.

The police asked the protesters to disperse peacefully, but they insisted that the hunters should leave instead because they were destroying the only crop produced during the entire season.

The police baton-charged the protesters when they tried to continue their march towards the camps. The demonstrators shouted slogans against the government and the hunters.

Later on, Mankera’s Assistant Commissioner Muhammad Mustafa reached the spot and held negotiations with the protesters.

It was decided that a delegation of protesters would meet the royal hunters to find out whether or not the problem could be solved amicably through compensation etc.

A protester told Dawn that chickpea was the only crop suitable for the sandy soil of the area.

He said that hunting of the rare bird by Arab dignitaries had been continuing in the area for over a decade.

“The UAE hunters caused less damage to our crops and compensated the affected farmers handsomely whereas the Qataris pay a nominal compensation to only some of the farmers,” he said.

He said that last year the Qatari hunters announced that a hospital and a school would be built in the area when a similar protest had been held against them, but no initiative had been taken so far in this regard.

District Police Officer Khalid Masood claimed the damage inflicted on the crop was not as grave as made out to be. The local farmers had become used to getting compensation from the royal hunters by holding demonstrations against them.

He added that the Arab hunters had initiated various development projects in the area.

How we lost the Middle East by tying our camels with the Saudis
30,000-year-old rock art, 110 heritage sites discovered in Khyber Agency