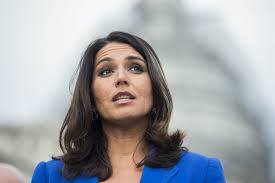 so far as world peace and prosperity goes, most of the names currently being kicked around for America’s top diplomatic position do not inspire a great deal of confidence. It’s easy to feel uneasy when you see recycled neoconservative hawks like John Bolton and Rudy Giuliani, or old hands like Mitt Romney who previously stated that ‘Russia is America’s greatest threat.’

As far as potential picks go for Secretary of State, none is more interesting than the potential that Democratic Congresswoman  Tulsi Gabbard brings to the table. President-Elect Donald Trump invited Hawaii’s Gabbard to New York City this week for a meeting regarding possible involvement in the new Presidential Administration. She’s got a lot going for her – as an Iraq War veteran with deep understanding of the perils of US interventions overseas, she also brings with her some common sense geopolitical context – a refreshing change from the off-the-shelf, neoliberal interventionist juggernaut previously driven by the hawkish Hillary Clinton, or the flippant public tirades and baseless insults leveled at Russia by the likes of Samantha Power.

With an apparently more experienced Romney ahead of her in the queue, Gabbard is certainly a long shot, but considering the mess left behind by eight years of clandestine free for-all and the chronic absent-minded Obama era interventionist policy blunders, not to mention (but we will) the hysterical public meltdowns by US State Dept spokespersons like John Kirby, Jen Psaki and Marie Harf – you can’t help but consider the fresh approach that someone like Gabbard might offer.

Gabbard (photo, left) also understands the dangers posed by salafist Wahabi and Deobandi extremists like ISIS, and most certainly would push back against the Obama Administration and the CIA’s dubious (and technically illegal, by way of US and international law) policy of arming and supporting various and sundry ‘moderate rebel’ extremists (terrorists) in Syria – like Al Nusra Front, Arar al Sham, Nour al-din al-Zenki and many others – all favored by western covert subterfuge teams as instruments of ‘regime change’ in Syria.

In terms of independence, Gabbard has already made it clear that her stint would not involve capitulating to her GOP cabinet cohorts, adding that if she was to disagree with President Trump, “I will not hesitate to express that disagreement.”

Previously, Gabbard was Vice Chair of the Democratic National Committee (DNC), but suddenly resigned earlier this year in protest after pointing out her party’s unfair favoring of Hillary Clinton over Bernie Sanders during their party’s primaries. Following the Wikileaks disclosures, it turns out that Gabbard was on the right side of history, while her detractors in the DNC leadership hierarchy like Chairwoman Debbie Wasserman-Schultz (forced to resign over the Sanders affair was exposed) and Donna Brazile (caught cheating with CNN by passing questions to the Clinton campaign) ended up on the wrong side of history. Here we can see a positive pattern emerging for Gabbard, and it gets better.

Regarding foreign policy, Gabbard’s stance on Syria is remarkable, and holds great potential for a resolution to the 5 year conflict (not a civil war), as well as a chance to make positive inroads with Russia and other countries who have been perennial foes of both the Obama and Bush Administrations. Because of this, Gabbard has many enemies from on both the Republicans and Democratic chambers alike. Washington, with all of its untoward influence from the cartel of military defense contractor giants, and foreign lobbies like Israel and Saudi Arabia, will not go quietly overnight.

In a major departure from the abject failure of the Obama-Clinton-Kerry proxy war debacle in Syria, Gabbard said this about her alignment with Trump policy objectives and diffusing a tense situation in Syria:

“However, I believe we can disagree, even strongly, but still come together on issues that matter to the American people and affect their daily lives. We cannot allow continued divisiveness to destroy our country… I shared with him my grave concerns that escalating the war in Syria by implementing a so-called no fly/safe zone would be disastrous for the Syrian people, our country and the world,” she said. “It would lead to more death and suffering, exacerbate the refugee crisis, strengthen ISIS and al-Qaeda and bring us into a direct conflict with Russia, which could result in a nuclear war. We discussed my bill to end our country’s illegal war to overthrow the Syrian government and the need to focus our precious resources on rebuilding our own country and on defeating al-Qaeda, ISIS and other terrorist groups who pose a threat to the American people.”

Critics have remarked about her young age (35 years old) and lack of political experience. However, consider how much experience both of the previous Secretary of States had in John Kerry and Hillary Clinton – and yet, they have presided over one unmitigated foreign policy disaster after another, whether in Libya, Syria, Yemen or the Ukraine. Quite possibly, history will look back on these two Obama appointees as the worst ever Secretary of States to hold that position. This is no exaggeration when you pause and take a sober look around the Middle East today.

Aside from the novelty of her relative youth in relation to typically older diplomats, Gabbard’s authenticity and character comes across in her public speaking, and thus she could be very effective, and no doubt very popular internationally. She’s also gone against the party line on Syria. Once again, there she is on the right side of history, while her more experienced party leaders are on stuck on the wrong side. While boldly challenging the party line won’t win you any favors in the partisan cesspool of the DC swamp, it shows the sort of character required to lead a team for successful bilateral consensus-building at the international negotiations table. In terms of the US public relations image internationally, this is an intangible benefit that you simply cannot put a price on, because right now, Washington’s chief priority should be mending some of the serious rifts left behind by a previously derelict State Dept. Gabbard has the potential to paint US diplomacy in an entirely new light, and a positive one at that. The biggest mistake a Trump White House could make is to place a neoconservative, or hawkish Secretary in place who might help to reboot talking up a war with Iran, or use NATO to press against Russia at its doorstep.

So the real question should not be about Gabbard’s relative experience, but rather can she be what the previous Secretaries could not – a diplomat.

It’s a long shot, but she has the potential to mend a fractured Middle East and also revamp relations with Russia – which means a more peaceful and stable world. Not a bad a thought.

Democratic Rep. Tulsi Gabbard, a high-profile Bernie Sanders supporter during the Democratic primaries, is “under serious consideration” for various Cabinet positions in President-elect Donald Trump‘s administration, according to a senior official on the transition team.

According to the official, the 35-year-old Hawaii congresswoman is being looked as a candidate for secretary of state, secretary of defense or United Nations ambassador. If selected, Gabbard will be the first woman as well as the youngest pick for Trump’s Cabinet.

She met with him this morning in his New York City offices at Trump Tower. The Trump transition source said that their sit-down was a “terrific meeting” and that the Trump team sees her as very impressive.

Gabbard, a progressive Democrat, has bucked her party in Congress and during the contentious Democratic primaries. In February she left her position as vice chairwoman of the Democratic National Committee to support Sanders. In the House she has broken with Democrats on the Syrian civil war (she supports keeping President Bashar al-Assad in power) and Syrian refugees (she voted for a GOP bill last year to conduct stricter background checks on refugees).

This afternoon she released a long statement on her meeting with Trump, saying he asked to meet with her about “our current policies regarding Syria, our fight against terrorist groups like al-Qaeda and ISIS, as well as other foreign policy challenges we face.” She said they had a “frank and positive conversation in which we discussed a variety of foreign policy issues in depth.”