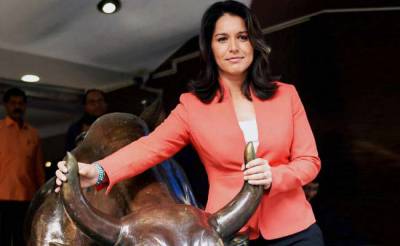 Tulsi Gabbard will always stand on principle. She is not like other politicians who run after money and sell out to Saudis. She will have the interest of the oppressed Sunni Sufi Shia Hindu Christian Yazidi and others at heart.

She will reject the exclusionist Takfiri Deobandi and Salafi ideologies. She will create a discourse that rejects  neocons and their false binary peddling commercial neoliberal Clintonian elites.

Whoever the President-Elect taps to be his secretary of state will play a crucial role in shaping the President-Elect’s vision for the future of American foreign policy. One person reportedly “under serious consideration” to fill the position is United States Congresswoman Tulsi Gabbard (D-HI), who made headlines in February when she resigned as vice chairwoman of the Democratic National Committee in order to endorse Bernie Sanders for President.

Rep. Gabbard embodies the very essence of the President-Elect’s ideological departure from the interventionist policies that have plagued this nation for the past two decades. One need look no further than her June 17 interview with Wolf Blitzer for evidence of her commitment to breaking with the current orthodoxy.

Trump is President Elect, while most democrats remain in denial about the failed Syria policy and the impact it could have to our country, Tulsi Gabbard has once again shown leadership and engaged based on principles.

The principles of non intervention and engagement have been very clearly articulated by Congresswoman Tulsi Gabbard in her discourse of saying no to false Shia Sunni binary and draining the swamp of the exclusionist ideology.

The failed Clintonian policies of the past have brought the Middle East to the brink. There is a real possibility of a Vietnam style surrender.

We need to work for American interest and work with all stakeholders including the Iranians, the Hijazis, the Bahrainis, the Turks and all others.

There is a mini World War going on inside Syria which Hillary wanted to expand to a full fledged World War.

We can approach this region with economic and technology driven programs, let’s turn the Deserts into Gardens, Madrassas into Universities and Enemies into Friends.

JOBS JOBS JOBS for the American people and the people of the Middle East will be the result.

A smart Tulsi policy will not only allow US to regain its influence but to expand it through education, technological development and human development of all people.

A smart Tulsi policy will ensure a Middle East people to people partnership for the next hundred years.

A smart Tulsi policy will ensure the end of Genocide for the next hundred years.

Although focused on Abraham Lincoln, this book is a skillfully-crafted multiple biography of Lincoln and his three key rivals for the Republican Party’s presidential nomination in 1860. William Seward, Edward Bates and Salmon Chase each became key members of Lincoln’s cabinet, and each contributed greatly to both the strength and the dissonance which infused his administration. How Lincoln harnessed the capabilities of this unique coalition of talented, but fiercely competitive, voices is the subject of much of Goodwin’s analysis.
https://bestpresidentialbios.com/2014/05/30/review-of-team-of-rivals-the-political-genius-of-abraham-lincoln-by-doris-kearns-goodwin/

Political and social polarization in Europe – by Shiraz Paracha
Fidel Castro Died: One of the greatest benefits of the revolution is that even our prostitutes are college graduates.