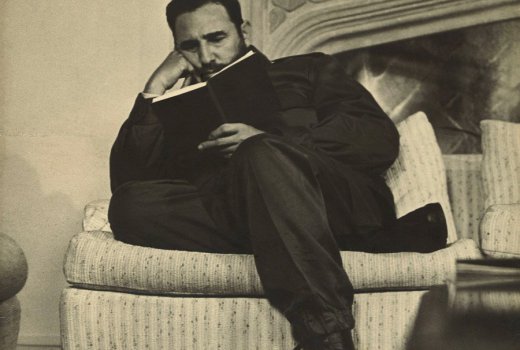 “Here is a conclusion I’ve come to after many years: among all the errors we may have committed, the greatest of them all was that we believed that someone … actually knew how to build socialism… Whenever they said. ‘That’s the formula,’ we thought they knew. Just as if someone is a physician.” – Castro in 2005.

“One of the greatest benefits of the revolution is that even our prostitutes are college graduates.” – Castro to director Oliver Stone in 2003 documentary “Comandante.”

“I’m not thinking of cutting my beard, because I’m accustomed to my beard and my beard means many things to my country. When we fulfil our promise of good government I will cut my beard.” – Castro in a 1959 interview with CBS’s Edward Murrow, 30 days after the revolution.

“I reached the conclusion long ago that the one last sacrifice I must make for (Cuban) public health is to stop smoking. I haven’t really missed it that much.” – Castro in December 1985 upon announcing he had stopped smoking cigars.

Was it coincidence when I was re-reading book of Fidel Castro ‘The World Economic and Social Crisis’ then Rahul Castro younger brother of him announced that Fidel Castro father of communist Cuba had been died at age of 90? I saddened and shocked despite the news of his death was not unexpected for me. He was legendary and source of inspiration for me due to his commitment for oppressed people and his services for true humanity.

Before his 90th birthday he told supporters he was going to die soon:

He continued: “The time will come for all of us, but the ideas of the Cuban communists will remain as proof on this planet that if they are worked at with fervor and dignity, they can produce the material and cultural goods that human beings need, and we need to fight without truce to obtain them.”

“I never saw a contradiction between the ideas that sustain me and the ideas of that symbol, of that extraordinary figure (Jesus Christ).” – Castro in 1985.

“Just imagine what would happen in the world if the socialist community were to disappear … if this were possible and I don’t believe it is possible.” – Castro in 1989.

“We do not know anything about this. We, gentlemen, to tell the truth, do not even know what to charge.” – Castro in 1990 on the development of international tourism In Cuba.

“We have to stick to the facts and, simply put, the socialist camp has collapsed.” – Castro in 1991.

“These changes (the opening to international tourism, foreign investment, some small business and family remittances)have their social cost, because we lived in a glass case, pure asepsis, and now we are surrounded by viruses, bacteria to the point of distraction and the egoism created by the capitalist system of production.” – Castro in 1998.

Fidel Alejandro Castro Ruz, commonly known as Fidel Castrowas a Cuban politician and revolutionary who governed the Republic of Cuba as Prime Minister from 1959 to 1976 and then as President from 1976 to 2008.

His greatest achievement was that he had liberated Cuba from clutches of US imperialism. He led Cuban Communist revolution. Under his rule Cuban people got best health infrastructure. He made possible free education, free Health Services, Free Housing and food for all for every Cuban citizen which is no doubt is miracle and capitalist world still could not achieve these goals despite tall claims.

Healthcare in Cuba. The Cuban government operates a national health system and assumes fiscal and administrative responsibility for the health care of all its citizens. There are no private hospitals or clinics as all health services are government-run. The present Minister for Public Health is Roberto Morales Ojeda.

With an infant mortality rate of 4.2 per thousand births, the Caribbean island is the best performer on the continent and in the Third World generally. This is also demonstrated by the quality of its health care system and the impact it has on the well-being of children and pregnant women. The infant mortality rate in Cuba is lower than it is in the United States and is among the lowest in the world. [5]

With a life expectancy of 78 years, Cuba is one of the best performers on the American continent and in the Third World, achieving results similar to those of most developed nations. On the average, Cubans live 30 years longer than their Haitian neighbors. In 2025, Cuba will have the highest proportion of its population over the age of 60 in all of Latin America.

The Economy of Cuba is a planned economy dominated by state-run enterprises. Most industries are owned and operated by the government and most of the labor force is employed by the state. Following the fall of the Soviet Union, the Communist Party encouraged the formation of cooperatives and self-employment.

Castro said, “Capitalism is using its money; we socialists throw it awayThe revenues of Cuban state-run companies are used exclusively for the benefit of the people, to whom they belong…”

When I was 12 years old then very first time I heard his name with his quote:

“A revolution is a struggle to the death between the future and the past”. And we can say that he proved this through his struggle. He never doubted on socialist ideas and always saw things through these ideas. Once he wrote, “I find capitalism repugnant. It is filthy, it is gross, and it is alienating… because it causes war, hypocrisy and competition.” How much he was right.

‏Pakistani commercial liberal mafia is calling Fidel Castro a brutal dictator, enemy of liberties bla bla. I give them shut up call, and my senior comrade Riaz Malik once again replied them with precise and accurate words,

“Saddened to see some vicious and abusive language even from Pakistanis who actually benefitted from Cuba under Fidel. In 2005 when an earthquake devastated Pakistan, Cuban medical teams were at the forefront in providing relief for months. Unlike Jud and JUI/JI, they did not misuse the tragedy for ideological conversion and typical anti-Shia bigotry. Unlike western-funded NGOs, they did not come with strings attached and sneaky billings.
Interesting to see Sanders and M Moore supporting desis relying on propaganda channels like CNN for Fidel and their shallow and unrealistic commentary.

He provided great healthcare and education and has preserved Cuba’s heritage instead of pimping his own people into one unnatural and grotesque Dubai Mall.”

Fidel Castro exposed capitalist world and unmasked its clichés. Capitalism in his eyes was discourse of thieves, interventionists and traitors.

Fidel Castro died on November 25, 2016 physically but he will remain alive in forms of his great revolutionary ideas in our heart.

Red Salute to comrade Fidel Castro and Rest In Peace.

Fidel Castro Died:One of the greatest benefits of the revolution is that even our prostitutes are college graduates.