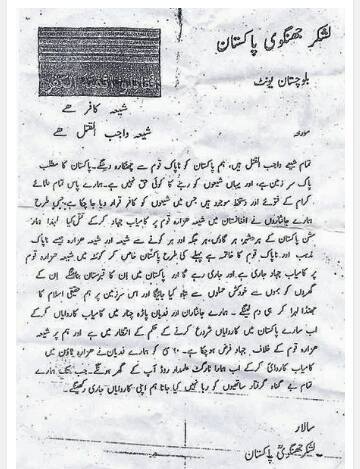 Remember , the same LeJ claimed responsibility of recent attack on quetta Police Training Center . Terrorist groups like Lashkar-e-Jhangvi consider not only the Shias but also Pakistani Sunnis , who venerate shrines of Sufi mystics , as infidels deserving death . In the summer of 2011, Jhangvi sent an open letter to the Shia community in Quetta , the capital of Pakistan’s Balochistan province and home to around six hundred thousand Shias from the Hazara tribe .

The letter, written in Urdu and signed by the commander of Jhangvi can be seen below (it reads: All Shias are worthy of killing. We will rid Pakistan of [this] unclean people. Pakistan means land of the pure, and the Shias have no right to be here. We will make Pakistan their graveyard—their houses will be destroyed by bombs and suicide bombers) .

While these beasts are ruling the country , how can a common Pakistani expect peace and prosperity ?