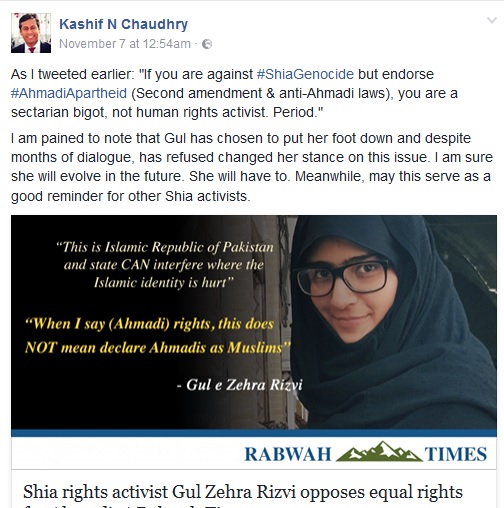 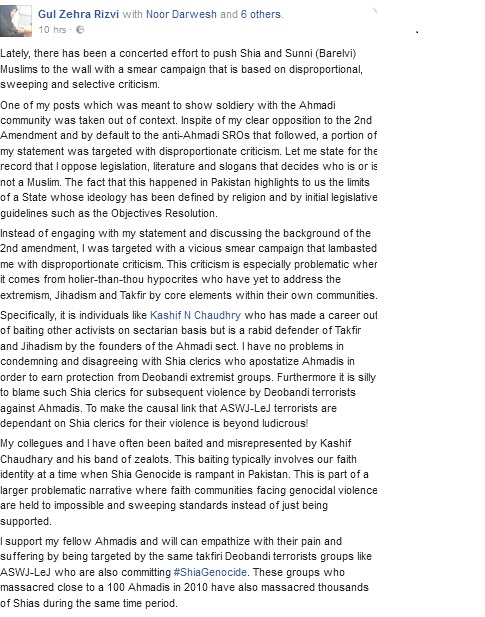 Editor’s Note: Persecuted communities must not engage in holier than thou type counterproductive arguments and allegations against each other. Finding faults with each other based on micro-analyses and isolated videos or statements won’t help anyone. Focus on the Deobandi Takfiri idoelogy of hate clerics of TTP-ASWJ if you want to live, else not a single Sunni Barelvi, Shia, Ahmadi, Christian or Hindu will survive in Pakistan. This holier than thou mentality of people like Kashif Chaudhary is indeed regrettable and reprehensible – especially when baiting and maligning activists like Gul Zehra.

Lately, there has been a concerted effort to push Shia and Sunni (Barelvi) Muslims to the wall with a smear campaign that is based on disproportional, sweeping and selective criticism.

One of my posts which was meant to show soldiery with the Ahmadi community was taken out of context. Inspite of my clear opposition to the 2nd Amendment and by default to the anti-Ahmadi SROs that followed, a portion of my statement was targeted with disproportionate criticism. Let me state for the record that I oppose legislation, literature and slogans that decides who is or is not a Muslim. The fact that this happened in Pakistan highlights to us the limits of a State whose ideology has been defined by religion and by initial legislative guidelines such as the Objectives Resolution.

Instead of engaging with my statement and discussing the background of the 2nd amendment, I was targeted with a vicious smear campaign that lambasted me with disproportionate criticism. This criticism is especially problematic when it comes from holier-than-thou hypocrites who have yet to address the extremism, Jihadism and Takfir by core elements within their own communities.

Specifically, it is individuals like Kashif N Chaudhry who has made a career out of baiting other activists on sectarian basis but is a rabid defender of Takfir and Jihadism by the founders of the Ahmadi sect. I have no problems in condemning and disagreeing with Shia clerics who apostatize Ahmadis in order to earn protection from Deobandi extremist groups. Furthermore it is silly to blame such Shia clerics for subsequent violence by Deobandi terrorists against Ahmadis. To make the causal link that ASWJ-LeJ terrorists are dependant on Shia clerics for their violence is beyond ludicrous!

My collegues and I have often been baited and misrepresented by Kashif Chaudhary and his band of zealots. This baiting typically involves our faith identity at a time when Shia Genocide is rampant in Pakistan. This is part of a larger problematic narrative where faith communities facing genocidal violence are held to impossible and sweeping standards instead of just being supported.

I support my fellow Ahmadis and will can empathize with their pain and suffering by being targeted by the same takfiri Deobandi terrorists groups like ASWJ-LeJ who are also committing #ShiaGenocide. These groups who massacred close to a 100 Ahmadis in 2010 have also massacred thousands of Shias during the same time period.

However, every time an Ahmadis is targeted and discriminated, I think it is distasteful, nay vile to highlight the hate literature and apostasy literature of Ahmadi founders and caliphs; literature that declares anyone and everyone outside the pale of Islam if they do not pay allegiance and belief in the Ahmadi caliphs and Messiahs. Similarly, every time that Deobandi hate clerics issues a vile statement against Ahmadis, I feel that Shias and Sunnis should unite and condemn such bigots. Many of us have condemned Mr. Ashrafi repeatedly and we are well aware of his supportors – some of whom also claim to be supportors of Ahmadi rights! Whether this is just simply irony or something more, I leave for the reader to decide! However, there cannot be different standards for Mr. Shaheedi and Mr. Ashrafi – especially with Mr. Ashrafi’s public links with ASWJ-LeJ which has actually attacked and killed Ahmedis.

Instead of his constant self-righteous moralizing, Mr. Chaudhary should be asked why he glorifies controversial Generals who are chastised for their war crimes by the Holy Prophet.

In his Daily Times article, Mr. Chaudhary channels his inner Nasim Hejazi by glorifying the violence, massacres and inter-muslim civil wars conducted by Khalid Bin Walid. Even the second political Caliph Hazrat Umar had chastised Khalid Bin Walid for his murder of fellow muslims like Malik Bin Nuweria. Khalid Bin Walid then forcibly married the widow of Malik Bin Nuweria within hours of murdering her husband. There is not even a shred of irony by Kashif when he glorifies the internecine violence during this period of muslim history when thousands were murdered for declaring themselves false prophets. Doesn’t Mr. Chaudhary realize that this is precisely the precedents that are used to demonize his own sect?

Kashif should realize that he cannot pander to the religious right in Pakistan by glorifying internecine Muslim violence on the one hand while portraying himself as a peace activist in his Huffington Post articles. He cannot deny the reality of the Ahmadi Al Furqan brigade that participated in the first “Jihad” mandated by the Pakistani State in 1948!

At a time when my co-religionists and I are too busy picking up the dead bodies of our friends and relatives on a daily basis, we do not need bigots like Kashif Chaudhary to issue us with Certificates of Righteousness. Spare me the False outrage.

Donald Trump has done the unthinkable – Ali J. Zaidi
A tribute to my uncles who were gunned down in the Nazimabad attacks – Aliya Zaidi