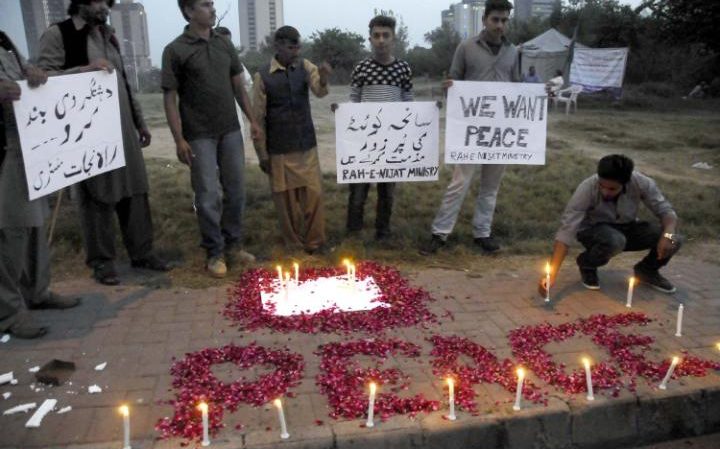 Editor’s Note: The daily Telegraph article points to overlapping memberships of Al Quaeda, Taliban and ISIS. We can extrapolate to include other groups like LEJ ASWJ, in fact we will run out of space making long lists of rebrandings of the Takfiri Deobandi and Salafi mindset.

Isil worked in alliance with a Pakistani terrorist group to kill 63 people at a police academy in Quetta this week, the latter’s spokesman said last night.

The claim will stoke fears that the Islamic State of Iraq and the Levant is expanding its presence into South Asia, where it has traditionally been overshadowed by al-Qaeda and the Taliban.

“We have no direct link with Daesh [Isil], but we have done this attack together,” said a spokesman for Lashkar-e-Jhangvi Al-Alami, the group Pakistani authorities hold responsible for Tuesday’s assault.

Isil claimed the attack on Tuesday, releasing photos of three men it said had carried out the attack.

At least 120 people were injured in Tuesday’s terror strike, carried out by three suicide bombers. It was the deadliest such assault on a security base in Pakistan’s history.

Pakistani authorities said phone intercepts proved LeJ Al-Alami were behind the attack, disputing Isil’s involvement. But LeJ Al-Alami, a banned Sunni militant organisation set up in 1996 which has claimed responsibility for killing hundreds of Pakistani Shias, has previously been linked with Isil.

Several of its leaders were killed by Pakistani security forces in Muzaffargarh last July amid reports it was moving closer to the so-called “caliphate”, which shares its anti-Shia ideology and has used sectarian hatred to cultivate support in the Middle East.

While Isil is losing ground in Iraq, analysts have predicted it would reach out to South Asian militants who have grown disillusioned with al-Qaeda and its Taliban allies, but lack the capacity to strike on their own.

“Isil is working with others in South Asia because its network isn’t large on the ground,” said Raffaello Pantucci, a terror analyst at the Royal United Services Institute think tank.

“It is under pressure at home, so it makes sense it wants its affiliates to rise up. Looking around the world for where Isil affiliates have a foothold and operations, Afghanistan seems more substantial than North Africa.

“The group is effective, has forces and is doing training, so it has potential. So South Asia may turn out to be the region people should worry about.”

Funerals were held in Quetta on Wednesday, where bereaved relatives were forced to personally collect their family members’ bodies from the attack site as emergency services struggled to cope with the toll.

“My son joined the police to serve his country and its people,” said Balach Khan, father of police cadet victim Naseer Khan. “But if police are not able to give security their own traning centre, how will they serve the nation?”