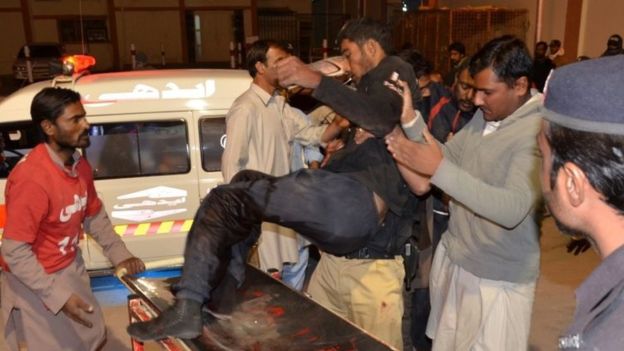 LUBP has been advocating the dismantling of Takfiri madrassas like Jamia Binoria, Lal Masjid and others for more than a decade. We have lost bloggers like Khurram Zaki and Irfan Khudi Ali, many of our pens have been silenced with threats from establishment liberal proxies of Takfiri Deobandi nexus in the establishment.

Lashkar e Jhangvi claims responsibility of the Quetta Police School Attack that occurred today. The group has been involved in several terrorist attacks against Hazara community as well as the target killings and attacks against other members and installations of the communities including Shia, Sunni and minorities.

Those who mistakenly refer to these terrorists as anti-Shia groups only, must open their eyes and check the sects of the 59 trainees killed in the Quetta police school attack. It is high time that people realize that all these terrorist groups are mercenaries paid and fueled by a greater agenda not only against any particular school of thought but Pakistan.

The twin loss of Sabri and Zaki this year is unbearable for team LUBP.

At least 58 cadets and guards have been killed after militants attacked a police college in the Pakistani city of Quetta, officials say.

A major security operation lasted for hours and all attackers were killed.

No group has said they carried out the assault, but Quetta has seen similar attacks by separatists and Islamist militants in recent years.

Hundreds of trainees were evacuated from Balochistan Police College as troops arrived to repel the militants. Local media reported at least three explosions at the scene.

“I saw three men in camouflage whose faces were hidden carrying Kalashnikovs,” one cadet said according to AFP news agency. “They started firing and entered the dormitory but I managed to escape over a wall.”

The police academy is home to hundreds of students and many of the cadets who died were killed in the blasts, said Major General Sher Afgan of the Frontier Corps. http://www.bbc.com/news/world-asia-37757914