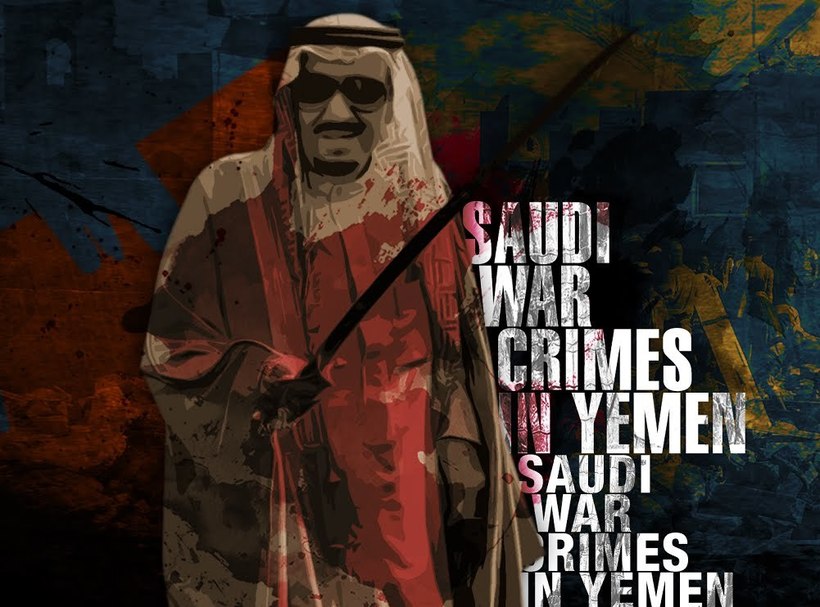 In a rather pathetic, and may I dare say rather unsophisticated fashion, Saudi Arabia – the grand devourer of world, attempted this October 15, 2016 to rationalise murder by pinning blame onto the very regime it claims has political legitimacy in Yemen.

To untangle itself from a global outcry before the wanton slaughter of civilians in Yemen, Riyadh named and shamed those factions, and those individuals, it once said ought to be returned to power – even if against the wishes of the people.

Confused? I would lie if I didn’t say I suffer from a political whiplash myself …

Before I walk you through the maze which is Saudi political logic … yes apparently it’s a thing, I would like to issue a disclaimer: Al-Saud would have a better chance at proving their innocence by arguing insanity. The sheer degree of arrogance and sociopathic political disassociation the kingdom demonstrated over the past week is mesmerizing. This regime is the very personification of Evil.

So no I will not even attempt to be rational in my analysis. As far as Saudi Arabia is concerned I will wear my prejudices on my sleeve and feel entitled to my sarcasm. At this point in time and due to the rivers of blood al-Saud made flow across the Middle East there is NOTHING any officials can say which will atone for the kingdom’s sins.

Now that I got this out of my chest let me go on.

Earlier this October a Saudi warplane, operating under the banner of the Saudi-led military coalition against Yemen targeted a funeral hall in the Yemeni capital Sana’a – not once, not twice, but three consecutive times. The attack was brutal, bloody and very much in violation of every law ever written by man.

An excess of 140 people were killed in the attack – according to Western media anyway. Yemeni officials have estimated the death toll to stand well over 300, including children. But figures are not what nations are arguing anymore!

The fact that unarmed civilians were slaughtered as they performed the last rites only sent a few shivers down the West’s spine – nothing major, just a little jolt to remind state officials that human life is not a disposable commodity … yet.

What nations are now arguing is responsibility, and the very dreaded notion of accountability. God forbids anyone would call on the kingdom to abide by the rule of law. And so a plan had to be devised … and what a beautifully carved idiotic plan it has been.

In all seriousness, you would like to think that Riyadh’s billions could master something better than a first-grader attempt to pass on the buck; especially when it entails implicating oneself further, especially when it equates to crumbling the very argument one so carefully built to wage an aggressive war on a sovereign nation. Just so you know international law frowns upon belligerent powers.

However difficult this may be to comprehend in this age of perpetual Western military interventionism, there is such a thing as territorial sovereignty. Nations cannot simply go about violently reforming other nations when they feel an urge to itch. But again, the legality of Saudi Arabia’s war on Yemen was never a matter of contention, not as far as Western capitals are concerned anyway.

And why should it when billions are to be made through lucrative military contracts? Who cares about Yemen’s sons and daughters when bottom lines are getting fatter still.

So what gave? And what did the Saudis do when faced with global outrage?

If the world is quite happy to stomach a quiet genocide, it appears our humanity draws a line at mass murder. It appears that the slaughter of the innocent as they mourn their dead in broad daylight still turns those un-empathetic stomach of ours.

And so world powers had to condemn. Officials had to object and verbally smite Saudi Arabia for the blood that stains its criminal hands. Need I highlight what embarrassment Riyadh’s faux pas caused to its Western allies?

But here is where criminality turns down right sociopathic … Saudi Arabia has blamed resigned Yemeni despot Abdo Rabbo Mansour Hadi for the funeral strike. The kingdom now alleges that Hadi’s men stole one of their warplanes and went about randomly shooting civilians.

Your eyes are not deceiving you. This is the line Riyadh is toeing!!!

But this is not the best part …

The kingdom did not just throw Hadi under the bus – you know the one guy Saudi Arabia went to war for on account he is Yemen’s legitimate president; it also sold out one of its most loyal supporters to the wolves – al-Ahmar brothers.

This part is actually really interesting. Al Ahmar brothers are Yemen’s tribal royalty. This one family has towered over Yemen for decades – politically, tribally, financially, religiously, you name it, they have controlled it. The unofficial owner of al-Islah political party, al-Ahmar’s name has long been a euphemism for the Yemeni Muslim Brotherhood. The same Muslim Brotherhood Riyadh has outlawed and branded a terror organization.

See what I mean about whiplash?

Do you start to see where I’m going with this?

Let me recap: Rather than plead temporary insanity, or bad intelligence for its latest war crime, Riyadh chose to sacrifice not one, but two of its allies. Not only that, but it disappeared the very ground it has claimed in this conflict – how can al-Saud back Hadi’s so-called claim on power after that is anyone’s guess. To add to that predicament the kingdom car crashed the last bit of tribal support it had within Yemen.

And let me tell you off the bat: without the tribes no power will ever hold in Yemen.

Logic would now dictate that Saudi Arabia hands both Hadi and al-Ahmar family to the authorities. I am eagerly waiting to see that narrative play out!

You think that’s crazy? It gets better … who ever said the Saudis are not entertaining?

The Saudis can’t keep to up with their own truth doctoring.

On October 14, the Saudi Press Agency issued a statement in which Riyadh admits to the strike – after it very publicly claimed no attack was ever authorized that day, blaming “bad intelligence” for the massacre.

And then the story went on a tangent. “Because of non-compliance with coalition rules of engagement and procedures, and the issuing of incorrect information, a coalition aircraft wrongly targeted the location, resulting in civilian deaths and injuries,” the Saudi investigations team said.

And the coup de grace: “Appropriate action … must be taken against those who caused the incident, and … compensation must be offered to the families of the victims.”

Here is what the Saudi government is really saying: “Hadi’s loyal idiots stole the keys to our jet, and then they flew out of the kingdom without authorization, bombed the Yemeni capital because they felt like it, and then returned the plane hoping no one would notice.”

Come on now! Are we considering what this line entails?

Did the kingdom suffer a global stroke? Did daddy misplace his plane now?

Those are the guys our governments are selling weapons to. Let’s just hope their planes don’t get their GPS mixed up and bomb another country by mistake.

So here is an idea, invest in a good anti-theft system, get yourself some radars, and make sure no disgruntled Yemeni wannabe unelected president roams around your war toys.

Now, to the real question: what are we going to do about Saudi Arabia’s insane behaviour?

A roar at a Funeral, and Yemen’s war Is altered
It’s time to release the real history of the 1953 Iran coup