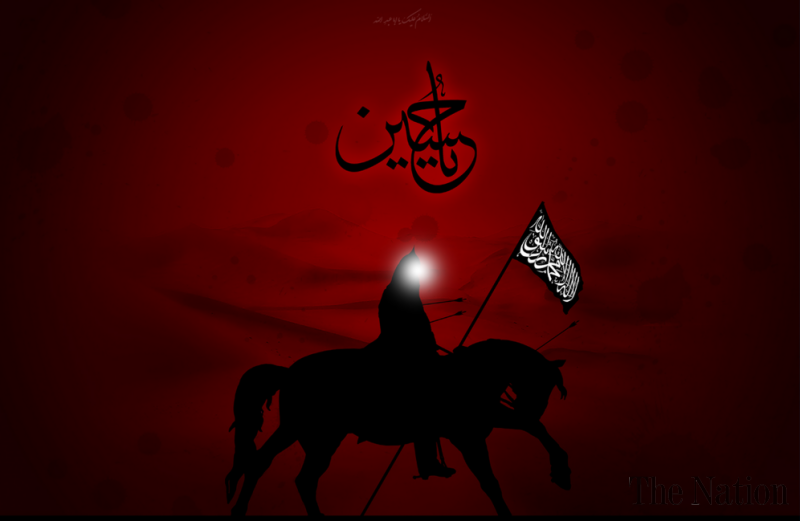 The religion of Islam has emerged as the second largest faith-following religion in the world. Today, the world of Islam seems to be in a miserable and desperate situation to overthrow the reins of oppression, lies and tyranny. The Middle East is near destruction at hands of Godless forces of ‘territorial expansionism’ and ‘atheistic materialism’. Imam Hosein’s moral struggle aimed at the routing the arrogant and tyrannical forces of oppressive militarism. Imam Hosein stood for the principle rule: ‘Moral Law is the Highest Law’. His sacrifice is a prime example for the people who seek faith as shelter and way of life. Aside from the four righteous caliphs, the Muslims should regard Imam Hassan and Imam Hosein as the fifth and sixth caliphs, respectively. The article aims at the lessons which the followers of Islam and other faiths can learn from the moral struggle of Imam Hosein. Both, Shias and Sunnis, revere the sacrifices offered by Imam Hosein and the Ahlul Bayt. Throughout the centuries, the moral struggle of Imam Hosein has proved an inspiration for those who have to muster enough strength; fortitude and integrity to call spade a spade.

Imam Hassan brought the two groups of Muslims to a united standpoint. It was Imam Hosein who started a mission to stand for truth of One God and submission to truth. The movement that started with the death of Imam Hosein was a symbol of mighty resistance and unrelenting courage. The Caliphate fell into hands of a military dictatorship that held ‘popular sovereignty’ hostage under the ‘militaristic status quo’ of Yazeedi establishment – which was built upon Kharijite lies. The movement launched to defy the ‘militaristic status quo’ led to resistance that spread across the Muslim heartland. However, the damage had been done. The caliphate was used as a tool to oppress and subjugate masses. The Islamic caliphate at the time of four righteous Caliphate was an institution based upon ‘bayt’ i.e. pledge of allegiance. There were four main Sufi orders. Three stemmed from Caliph Ali. One traced its origins to Caliph Abu Bakr. Those who stood with truth, justice and faith raised the flag of resistance which was based upon slogan: ‘Moral Law is the Highest Law’. The Ahlul Bayt and their followers spread out to places outside Arabia. The Indian sub-continent was introduced to Islam through traders, Sufis and those who escaped persecution of Ummayad military dictatorship. The armed struggle was initiated through Sindh despite the fact that Islam had made its way to Indian subcontinent in the lifetime of the Holy Prophet. The Kerala Masjid is deemed to be 1400 years old.

The story of Karbala has reached our generation through the struggle of forefathers to narrate the moral struggle of Imam Hosein against the ‘militaristic status quo’ of Yazeedi establishment. In contemporary era, there exists ‘militaristic status quo’ of global establishment which resonates to the ‘militaristic status quo’ of Yazeedi establishment i.e., relative to upcoming global military dictatorship of Israel.  It is part of a historical process which will be elaborated at a later stage in the article. These oppressors – i.e. Godless forces – seek the transfer of power from Pax-Americana to Pax-Judaica through world war. The Pro-Israeli NATO seeks to wage war on Russia and China. In response, the Sino-Russian led EurAsia along with Latin America, East Europe and parts of Africa are defying the ‘militaristic status quo’ of the global establishment. Study of Islamic eschatology reveals that the moral struggle which began with Imam Hosein will be taken to its goal by Imam Al-Mahdi, through the historical process of ‘movement of truth’ in the annals of historical events in order to restore ‘Days of Allah’ – time and again. Islamic eschatology depicts that the Great War will occur after the drying of River Euphrates, which will uncover a mountain of gold. Symbolic interpretationism suggests that ‘the mountain of gold’ is the petro-dollar system, which has formed the current socio-economic and political basis of the international order.

Christian Russia has emerged as the leader of resistance against the ‘militaristic status quo’ of global establishment which intends to impose global military dictatorship of Israel, where the international order will control resources and all sources of living. Relations between Pakistan and India have soured on issue of terrorism and Kashmir. US and Russia have locked loggerheads on issue of Syria. Symbolically, all these events are linked to the ‘denial of water’ and ‘lack of fairness’ at hands of Yazeedi militarism during moral struggle of Imam Hosein. The symbolic event  of drying of Euphrates, which passes near Karbala, refers to evacuation of oil in that area since 1974 which forms basis of petro-dollar international system. The cases of IWT and Syria ceasefire plan have become bone of contention between Pakistan-India and Russia-America, respectively. Pakistan brokered the rapprochement deal between Russia and Turkey. This depicts rise of East as new power player in multi-polar world order which have approached Iraq (the point will be clarified at later stage in the article) through the lens of Imam Hosein’s moral struggle: ‘Moral Law is the Highest Law.’

Egypt is the new ‘frontal’ firepower of Pro-Israeli NATO. Yemen, Syria and Iraq are the areas of proxy war between Saudi Arabia and Iran. Pro-Israeli NATO wants to ignite a Sunni-Shia civil war in the world of Islam, aiming at final aim of destruction of Pakistan. The military dictatorship in Egypt, in capacity of new NATO’s frontal firepower, intends to propagate alignment of the pro-Israeli and GCC agenda in Middle East. In this attempt, the ISIS can carry out false flags in Syraq-Egypt corridor after they have been beaten at Syrian-Turkish border at hands of Erdogan’s Turkey. The false flags will be blamed on Iranian assets i.e. Hezbollah. This will initiate the further phase of ‘gradual encirclement of Iran’. The response to such aggression is indicated in the Russian-Turkish rapprochement deal brokered by Pakistan. It is likely that Iran will proceed to annex Iraq. Turkey has a base in Mosul, Iraq. Pakistani Defense Minister, Kh Asif, announced assistance for Iraq. Russian intervened in Syria. China had, originally and initially, planned to provide assistance to Iraq but instead, proceeded to provide assistance to Syria. Is the Sino-Russian presence in Iraq being kept a secret in order to facilitate Iranian annexation of Iraq in event of clash between Sino-Russian led EurAsian camp and pro-Israeli NATO camp?  Why Iraq? All forces of militarism that want to rule the world will ignite war but fail and, their militarism will be consumed through symbolic event of ‘drying of river Euphrates’. All their attempts aim at imminent and inevitable war on Christian Russia, who is challenging the imposition of Israeli-led global military dictatorship at hands of ‘militaristic status quo’ run by global establishment in course of Eretz Israel. How is it possible that a ‘Euro-Jewish’ state comes into existence in a ‘sea of Islam’ but the Kurds were denied autonomy or independence? This is oppression.

Imam Hosein stood up against oppression and tyranny. He averted oppression by not waging war and concentrated on Moral struggle. He sacrificed everything he had. This is a lesson for the Muslims. The events of Islamic eschatology have no meaning or significance without the moral struggle of Imam Hosein. Today, the Godless and oppressive forces have used the elements of ‘territorial expansionism’ and ‘atheistic materialism’ in their all-encompassing endeavor to retain ‘militaristic status quo’ of global establishment. Imam Hosein’s moral struggle was against the ‘militaristic status quo’ of Yazeedi establishment. Today, in the world of Islam, it is Erdogan of Turkey who defied ‘militaristic status quo’ of Turkish establishment after he detected its weakness to resolve conflict. His steps averted the Turkish attack on Syria.  Nawaz Sharif was brought and ousted by military dictators. It must not be forgotten that Pakistan was attained through democratic and constitutional struggle based upon moral grounds. Prime Minister Nawaz Sharif has to deal with the duo, Indian and Pakistani establishments, at the same time. Modi was brought into power by the Indian establishment (Indian Army, Media and Corporatocracy). Israel wants to rule the world, unlike, Russia and China – who are defying the Gog-Magog world order. Hence, the activation of flashpoints prior to election of new American president is pertinent in the course of imposition of global military dictatorship. Financial system of petro-dollar converted into electronic money will be used to enslave masses.

At time of Caliph Umar, the Islamic Caliphate had become global superpower after defeating the Byzantinians and Persians. Caliph Umar sent an expedition to locate the wall of Gog-Magog. It was found to be in ruins in the Caucasus mountains. A Muslim army was sent to capture area around Caucasus mountains. The army of Islamic caliphate, a superpower, was defeated by the Caucasians. These Caucasians embraced religion of Judaism for political purposes. The Caucasians represent the (western) European civilization. They have a mysterious obsession with the Holy Land. Crusades were not Christian wars. They were European wars. WW1 and WW2 were not World Wars; in essence, they were European wars. French and Bolshevik revolutions were launched by the same forces. General Allenby, the British General who conquered Jerusalem in 1917, came to the mausoleum of Kurdish Salahuddin Ayyubi and stated: ‘Today, the crusades are over.’ The menace of the Gog-Magog had started to penetrate the world of Islam through ‘power-hungry’ Kharijites, who killed Caliph Usman and Caliph Ali.

According to teachings of Islamic eschatology, there is a link between the Moral struggles of Imam Hosein And Imam Mahdi. The mission of Imam Husayn will be completed by Imam Mahdi. This will be the defeat of Israeli Global Military dictatorship. Islamic eschatology states the emergence of AntiChrist the False Messiah after the event of conquest of Constantinople at hands of Joint Muslim-Christian army. Prophet Jesus will return to bury ‘oppressive militarism’ – forever; in the manner Pharaoh was drowned with his arrogance and oppression. Prophet Moses relieved the Israelites of slavery to Egyptian Pharaoh. This also suggests that true believers were always outnumbered and ‘out-powered’ but they waged a moral struggle and didn’t hesitate to sacrifice. They mustered enough strength, fortitude and integrity based on moral grounds to call spade a spade.

37 mourners of Imam Hussain a.s. killed by Takfiri Salafi and Deobandis
This Muharram, I realised that my father’s childhood is still alive