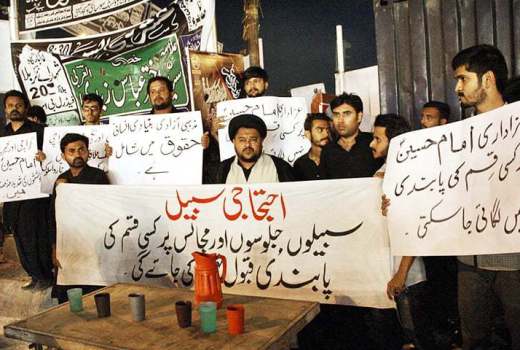 Toward Shiite community sometimes our mainstream media adopt very cruel and paltry approach while making report on their protest or their cry against religious discrimination. In Gulistan-i-Juhar Karachi Yesterday Shiite community protested against ban on Sabeel-i-Imam Hussain to provide free water and soft drinks (Sherbat) and on Meeting to mourn Imam-i-Hussain and their comrades in Karbala. Renowned website of a daily English newspaper Dawn focused more on traffic jam than the cause of protest made by Shiite community. Not only daily Dawn but majority in mainstream media is not highlighting the issue of religious discrimination and restriction on Shiite community to perform their religious duties and rituals in Ashura.

Sabeel Imam Hussain, To organize a mourning meeting to mourn martyrs of Karbala, to hoisting black or white flag in memory of Ghazi Abbas Alamdar (Flag holder on day of Ashura in Karbala) , to distribute charity food(Niaz) such are all religious rituals are being restricting by district administrations all over the country which were never declared illegal or against other religious community living in country.

In Karachi and district Khairpur Sind Sabeel Imam Hussain on side of roads were banned and those people who did not accept such discriminative ban and managed to provide free water and Sharbat on roads were thrashed and humiliated by Sind Rangers and Police. Such acts and actions from state security institutions are not only shameful but violation of human rights including right of freedom of religion.

Irony is that banned(just in papers), ISIS-affiliated Deobandi Takfiri organizations like so called Ahle Sunnat Wal Jamat-ASWJ are allowed to organize big rallies, incite further hatred against Sufi Sunnis,Shiite,Christians,Hindus, Ahmadis and other non-Takfiri groups. Neither Police nor Rangers we ever saw in action agains such un-lawful assemblies and meetings. Mainstream media never tells their readers or audiences about traffic jam but gives maximum coverage and projection their hatred meetings and rallies.

Sabeels of Iman Hussain are ransacked, hoisting of flags of Ghazi Abbas Alamdar are banned and traditional old Majalis-i-Azzadari (Mourning meetings for martyrs of Karbala and condemnation of Yazeedi forces are banned but to organize mass rallies against Shiite community, chanting slogans of Kafir, Kafir, Shiite Kafir in public rallies and incite violence and terror against Shiite and other communities during speeches in public are allowed and protected by civil administrations of Pakistan. This is because a tiny, minority Takfiri group like ASWJ do not like mass mourning processions, meetings and other rituals in Ashura. They do not bear growing culture of condemnation of Yazideeiat and Mourning Culture for Imam Hussain and his others comrades in Karbala.

Another example of Pathetic reporting by media including daily Dawn is of incident of target killing of four Shiite Hazra women singled out from 32 other passengers on bus in Quetta. Daily Dawn does not mention their Shiite identity in headline. Not a single newspaper mentioned possible background of such target killings and did not dare to mention records of involvement of Sipah Sahaba/ ASWJ in killings of Shiite community in Pakistan.

Quetta where four women from Shiite Hazra community were executed by Deobandi Takfirist terrorists and target killers easily fled is same city where hundreds of Shiite Hazra have been targeted but in this city activities of banned Takfiri organization ASWJ are in full swing, Ramzan mengal its head is roaming freely. Army (who is running whole affairs of province) and puppet government led by PML-N never tried to stop free roaming of master mind of Shiite killings incidents in Quetta.

Despite ongoing activities of banned, sectarian, terrorists Organizations and outfits implementation on NAP is satisfactory in the eyes of our civilian and military administration.

Implementation on National Action Plan is satisfactory also because two Pashtun Shiite young men were gun down in Hassanabdal.

Meanwhile, Pakistan’s so called numbers of enlightened, Marxists and liberals not only obfuscated Shiite genocide in Pakistan and such events have no importance in their eyes. They are making attacks on culture of Ashura and some of them are busy wishing “Happy New Years”. Some so called Marxists are calling Yazeed their great Comrade and blaming their mourners for this tragedy happened in Karbala.

“The depravity and insensitivity by a biased media knows no depths and that is why the Pro Taliban sympathisers in the media who produced this atrocious report share responsibility in today’s carnage. With it comes to obfuscating #ShiaGenocide there no difference between the right wing Urdu media and pseudo liberal English media elites. Both are well versed in the Jamaat e Islami practice of “blaming the victim”. They want Shias, Sunnis and Christians to confine themselves within four walls while their beloved Takfiri Deobandi terrorists roam free spewing hatred publicly.”

“The Jibran Nasirs and Asma Jehangirs will never come out with an unqualified support for Shias under attack. They will issue some pathetic and vague tokens and then participate in the obfuscation.”,says Riaz Malik in his new article.

Are State and Media with Takfirist in Case of Shiite Community in Pakistan?

ذکرِ حسین (ع) ترقی کرنے سے کیسے روکتا ہے؟
Yemen, on the brink of famine as 370,000 children may be starving