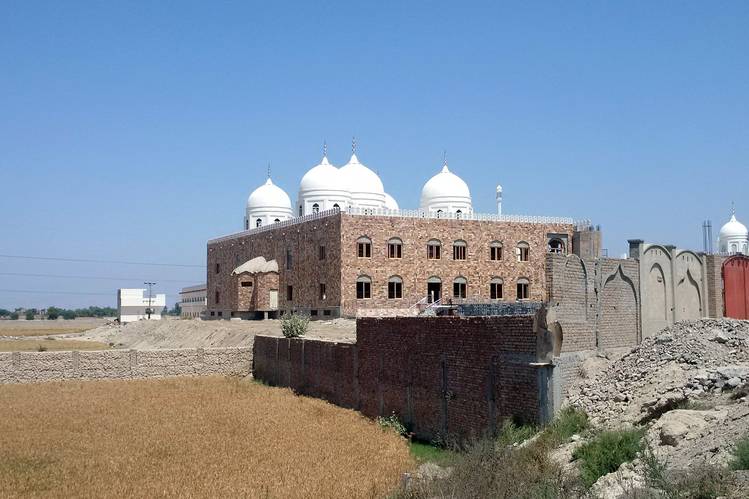 BAHAWALPUR, Pakistan—After a suicide bomber killed more than 70 people on Easter Sunday in a park in the eastern province of Punjab, the government vowed to go after Islamist militants in the area.

The massacre in the provincial capital of Lahore, which targeted the city’s sizable Christian minority, was claimed by a faction of the Pakistani Taliban, long a major target of the security forces.

But another outlawed extremist group, one with ties to al Qaeda, continues to operate openly at its base in this city of 600,000, which also is headquarters of the Pakistani army’s XXXI Corps.

On a recent visit, a bearded gunman lounged by the entrance of the four-story downtown compound that houses the group, Jaish-e-Mohammad, as well as an affiliated seminary. Residents and a member of the group said there hadn’t been any crackdown—even after India accused Jaish of being behind a cross-border attack in January.

Outside town, an even bigger Jaish installation is under construction, spread over at least 10 acres just off a highway. A new madrassa, crowned with white domes, loomed over the surrounding farmland.

“We don’t hide who we are. We are a jihadist group,” said a cleric affiliated with Jaish.

Pakistan’s powerful military and its spy agency have long been accused by neighboring countries and the U.S. of nurturing jihadists as proxy warriors for use in Afghanistan and India even as it campaigns against organizations that carry out domestic attacks.

Under international pressure, Islamabad has said it is waging a concerted campaign against all militants. But critics say the military still shelters jihadists it finds useful, even though the groups share an ideology and their members move back and forth.

“In reality, there is no clear separation between ‘good’ and ‘bad’ militants,” said Ayesha Siddiqa, an independent expert on Pakistan’s military.

Over the past two years, the country’s armed forces have tackled jihadists, especially the Pakistani Taliban, in the northwestern tribal areas and the southwestern province of Balochistan. Both areas border Afghanistan, where officials believe Pakistani Taliban leaders are based. There has also been a cleanup in the southern city of Karachi.

But the group is extending its reach. The Easter bombing was claimed by Jamaat-ul-Ahrar, a Pakistani Taliban affiliate that has established itself as the most brutal and capable militant group in the country.

Punjab, home to more than half of the country’s population, has seen a far more low-key approach to fighting extremists, run largely by the provincial police. Punjab is the political base of Prime Minister Nawaz Sharif. Mr. Sharif’s brother, Shehbaz Sharif, is the province’s top elected leader.

“Operations are only against those that shoot the police or army,” said Riaz Husain Pirzada, minister of federal-provincial coordination and a member of parliament from Bahawalpur, about 300 miles southwest of Lahore.

“The breeding grounds remain, the madrassas are still being financed,” said Mr. Pirzada, whose father was assassinated by Sunni Muslim jihadists who target Muslims from the minority Shiite sect.

Pakistan’s military spokesman didn’t respond to repeated requests to comment. A security official said the authorities would confront “all militants in time.”

A retired senior security official in Punjab said members of domestically focused militant groups in the province are taking shelter with Jaish and Lashkar-e-Taiba, another Punjab-based group that seeks to attack India, to escape counterterrorism operations.

A Western diplomat said that “while there seems to be an increasing recognition that the India-focused groups—Lashkar-e-Taiba and Jaish-e-Mohammad—represent real risks to Pakistan itself, it is not clear that anyone has settled on whether or how to address them.”

The Jaish cleric said his group opposes attacks in Pakistan. “We carry out attacks against the infidel in their country,” he said.

India alleges that Jaish was behind an attack on the Pathankot air base near the Pakistani border in early January. Seven Indian security personnel were killed in a battle that lasted more than 40 hours.

New Delhi says it has given Pakistan “leads” connecting Jaish to the attack. A team of investigators from Pakistan recently visited India to gather evidence.

Pakistan said after that assault that it was “tracing and sealing” the offices of Jaish, which has been banned in Pakistan since 2002 and is also labeled a terrorist organization by Washington.

Islamabad also said after the attack that Jaish’s leader, Masood Azhar, had been placed in protective custody. A senior security official now says he wasn’t detained, but was “within reach, if needed.”

A sign outside the Jaish complex in central Bahawalpur says it houses a madrassa “under the guidance” of Mr. Azhar, who has written a four-volume treatise on jihad. Another of his books, “Forty Diseases of the Jews,” says there is a global alliance of the enemies of Islam, including Israel, India and the U.S.

Rana Sanaullah, Punjab province’s law minister, said in an interview that Jaish “isn’t involved in terrorism in Pakistan.” He said he hadn’t seen any evidence from India to implicate Mr. Azhar in the Pathankot attack. He said that the Jaish madrassa in Bahawalpur was searched and “nothing found” there.

“If there is an area anywhere in Punjab where there is some safe haven, militancy training, recruitment, if there is a madrassa, mosque or neighborhood like that, we will go there and sort it out,” said Mr. Sanaullah, adding that 500 madrassas had been searched in the province.

The leader of Lashkar-e-Jhangvi, an al Qaeda ally that attacks Pakistani Shiites and security forces, was killed by police in Punjab last year.

Experts say that madrassas in the less-developed south of Punjab, districts like Bahawalpur as well as Multan and Dera Ghazi Khan, serve as a nursery for jihadist groups by teaching the hard-line Deobandi version of Islam, a puritan Sunni movement that is followed by the Pakistani Taliban and most other militant groups.

A leaked U.S. diplomatic cable from 2008 warned of growing jihadist recruitment from southern Punjab, and reported estimates of $100 million a year flowing to local radical clerics from Gulf countries.

A State Department spokeswoman pressed the U.S. message to Pakistan last week after a truck bomb in Kabul killed 64 people, which Afghan authorities blamed on militants based in Pakistan: Don’t discriminate between terror groups, “regardless of their agenda.”

In a speech Monday in Kabul, Afghan President Ashraf Ghani called on Pakistan to act responsibly. “There is no difference between good and bad terrorists, all terrorists are terrorists,” he said.

For the first time, Saudi Arabia is being attacked by both Sunni and Shia leaders
Saudi Wahhabis turn the house of Prophet & Khadija into public lavatories