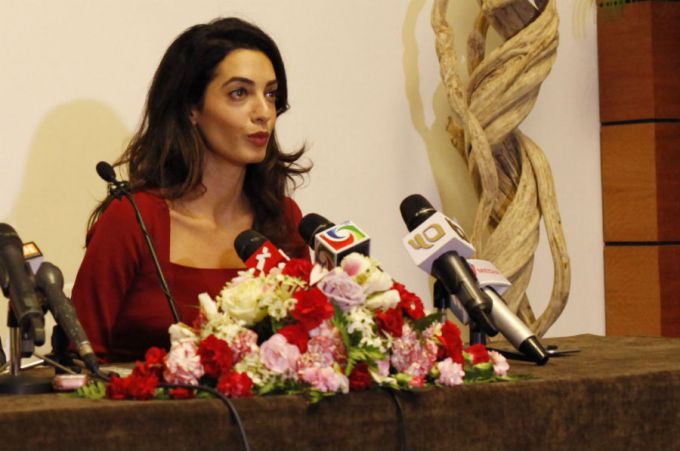 Nadia Murad, a young Yazidi woman who escaped ISIS captivity after her family was slaughtered, has been named a new U.N. Goodwill Ambassador and has been nominated for both a Nobel Peace Prize and as one of TIME Magazine’s 100 most influential people of 2016.

But despite the global recognition that Murad has garnered for the atrocities she and thousands of women like her have suffered, her lawyer, renowned Lebanese-British human rights advocate, activist and author Amal Clooney said that while the nominations mark progress, little has actually been done to bring justice to those committing genocide.

According to the British paper The Independent, in her speech at Murad’s Sept. 16 induction ceremony as Goodwill Ambassador, Clooney noted that it was her first time speaking in the chamber of the U.N. headquarters in New York, and stressed that “I wish I could say I’m proud to be here but I am not.”

“I am ashamed as a supporter of the United Nations that states are failing to prevent or even punish genocide because they find that their own interests get in the way. I am ashamed as a lawyer that there is no justice being done and barely a complaint being made about it,” she said.

Clooney said she is also ashamed as a woman “that girls like Nadia could have their bodies sold and used as battlefields,” and is shamed as a human being “that we ignore their cries for help. We know that what we have before us is genocide, and we know that it is still ongoing.”

Murad, 23, was captured by ISIS militants in 2014 when the group stormed Mt. Sinjar in Iraq, murdering her elderly mother and six brothers alongside hundreds of others. Like thousands of other Yazidi women, Murad was spared death but was taken as a slave and subjected to horrendous sexual and physical abuse after being sold as a slave multiple times.

Having experienced numerous humiliations and violations against her dignity, Murad managed to escape after three months and fled to Germany, where she currently lives.

Her appointment as a U.N. Goodwill Ambassador for the Dignity of Survivors of Human Trafficking for the U.N.’s drugs and crime body comes just months after she briefed the U.N. Security Council in the first-ever session on human trafficking Dec. 16, 2015.

In her testimony that day, Murad recounted her painful abduction and captivity, describing how she had been rounded up with other Yazidis when ISIS attacked, and watched as the militants shot men and boys in cold blood.

“We found ourselves faced with a true genocide…ISIS had one intention: to destroy the Yazidi identity by force, rape, recruitment of children, and destruction of all of our temples,” she said, noting that six of her brothers were among some 600 men and boys slaughtered by the militants in one day, while her mother was one of 80 elderly women executed and buried in a mass grave.

She stressed that the jihadists “didn’t come to kill the women and girls, but to use us as spoils of war, as objects to be sold … or to be gifted for free. Their cruelty was not merely opportunistic. The ISIS soldiers came with a pre-established policy to commit such crimes.”

“Rape was used to destroy women and girls and to guarantee that these women could never lead a normal life again,” she said, and recounted how on Aug. 15, 2014, ISIS militants came to her school and separated the men and women, killing the men and taking the women by bus to a different region.

“Along the way they humiliated us, they touched us and that violated us,” she said, explaining that they were taken to Mosul and brought to a building with thousands of other Yazidi families and exchanged as “gifts.”

“One of these men came up to me, he wanted to take me. I looked at the floor. I was absolutely petrified. When I looked up I saw a huge man, he was like a monster. I cried out, I said ‘I’m too young and you’re huge!’ He hit me, he kicked me and beat me,” Murad recounted.

She recalled that a few minutes later she was approached by a smaller man, and begged him to take her instead. The man, she said, asked her to change religion, but “I refused.”

He then asked for her hand in marriage, Murad said, and she then told him she was “ill.”

“A few days later he forced me to get dressed and put makeup on,” she said, recalling that after raping her, he forced her to serve as part of his military faction and humiliated her daily by torturing her and forcing her to wear clothes that didn’t fit her body.

On her first attempt to flee, Murad said she was stopped by a guard who then beat her, made her take her clothes off and then put into a room with the other guards, who raped her until she fainted.

After she finally managed to escape three months later, Murad said she was accepted into Germany, where she received the necessary medical attention.

She voiced her thanks to Germany for their welcome, but noted that the suffering she is advocating to end is not just her own, but a “collective suffering” of all women who face the same horrors.

At the Sept. 16 induction ceremony, which was set to coincide with the Sept. 21 U.N. International Day of Peace, Clooney emphasized that “what Nadia has told us about is genocide, and genocide doesn’t happen by accident. You have to plan it.”

“We know exactly who the perpetrators are. They brag. ISIS brags about its crimes online,” she said, explaining that “no one is more blameless” than a young Yazidi woman who has lost everything.

“Yet two years on, two years after the genocide began, 3,200 Yazidi women and children are still held captive by ISIS and not a single member of ISIS has been prosecuted in a court anywhere in the world for crimes committed against the Yazidi,” she observed.

Clooney praised Murad for her courage, saying the young woman’s strength and leadership “astounds me.”

“She has defied all the labels that life has given her: orphan, rape victim, slave, refugee. She has instead created new ones: survivor, Yazidi leader, women’s advocate, Nobel Peace Prize nominee. And now, as of today, Goodwill Ambassador.”

Speaking directly to Murad, Clooney said she was sorry “that we have failed you,” and voiced her hope that Murad’s appointment would be a turning point for all victims of sexual violence in human trafficking.

Murad has already met with various world leaders and heads of state in order to raise awareness of the plight of Yazidis suffering as victims of human trafficking.

Through her ambassadorship, according to the U.N. media advisory, Murad will focus on different advocacy initiatives and will raise awareness of the plight of the countless victims still suffering due to trafficking, particularly refugees, women and girls.