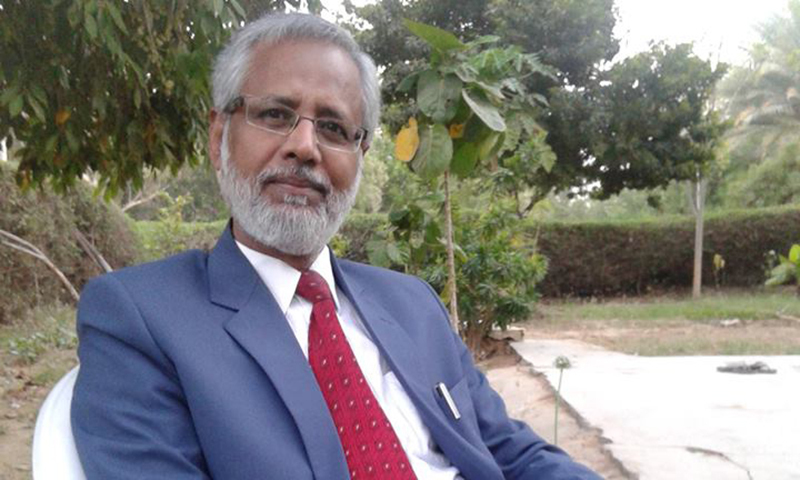 It has been two years now, when in a flicker of a moment, our whole world was turned upside down. And we understood death for the first time when it put its hand upon our father. The never-ending flashbacks wrench the soul out of me. The shadows that I feared so long came to life with his loss.

Those who had known or read Dr Shakil Auj were bewildered as to why someone would kill such a man. Many battered their brains to figure out his sect. His detailed views on the role of women in Islam were the ones that caused the most uproar. In his prominent work “Nisaiyaat – Issues Pertaining to Women”, he brought forth his philosophy regarding women rights in Quran in synchronisation with feminism. In his debates, he was of the view that Muslim women were allowed to marry even non-Muslim men, not preferably though.

This met with ferocious criticism since it was against the unanimous decision of all religious sects. But being a renowned Islamic research scholar, he possessed the right to present his view with Quranic references, which should have been countered with rational arguments.

The fundamentals of feminism being recognised by a noted Islamic scholar turned the tables for the clergy. Not only did Dr Auj equate men and women in the right to freedom; he also declared hijab as an option and face preferably should be kept open for identification, as per his interpretations.

He revitalised the phenomenon of women putting their foot in nation building alongside men, with the due consent of their husband or father. He strongly held the ground that decision of marriage is an equal right of both men and women – parents do not exercise the power to go against the will of both parties.

During a live show with Dr Amir Liaquat in 2002, he proposed his stance that removing nail polish for ablution is not mandatory. And to no surprise, it earned displeasure from the clergy. His fellow disciples of Hazrat Allama Shah Ahmed Noorani complained, to which Hazrat smilingly replied, “Dr Shakil Auj is mujtahid.

He is allowed to speak on behalf of his research.” Moreover, he believed that Quran declared husbands as caretakers of their wives, rather than their controllers.

He inferred that a woman’s half testimony is only for financial matters while in rest of the matters, her testimony is equal to that of a man. Many declared his views orthodox regarding the institution of marriage.

The beauty of his work lies in the fact that it is based solely on Quran, established Sunnah and rationality. Life started his journey from Barailwiyat to becoming a part of Minhaj-ul-Quran to Nizaam-e-Mustafa and his ultimate spiritual salvation in being the disciple of Hazrat Allama Shah Ahmed Noorani.

But his religious approach was moderate in every aspect, and he preferred to be called a Muslim rather than Sunni. He realised that the cultural tags of Arabs were confused with Islamic teachings while they were trivial to all intents and purposes. And that our society staunchly abides by its norms – considering them as pillars of Islam rather than options. This is exactly where the heat between the conformists and reformists begins to detonate.

He strongly advocated that the advent of Islam does not signify framing women under cloaks or men wearing turbans, above-ankle shalwars, and growing beards. Islam came to purify the souls, where exterior does not matter; it is all about the inner spirituality that dwells the infinite wisdom of the love for Allah, His Prophet Muhammad (pbuh) and humanity. Being candid, his teachings are the amalgamation of Sir Syed Ahmed Khan and Allama Iqbal’s religious philosophy, hands in hands with Amin Ahsan Islahi and Maududi’s religious ideology.

His discourse was reformations based on Quran and Sunnah, as per the contemporary challenges of modernism, or Islam might meet the same fate as Catholicism. He challenged clergy from the age of 25, and stumbled across his first fatwa of infidelity when he presented his detailed stance on divorce. This painful struggle never ceased to chase him for his religious interpretations, which were against the mainstream religious practices. He led Friday sermons across almost every street in Karachi, but radically banished for being a moderate. After repeated rejections and social boycott, he gave in to never lead Friday prayer or taraweeh in 2006, but he kept his ground open for genuine researchers and learners.

Masses pronounced him liberal despite the knowledge that he was a Hafiz-e-Quran – a product of madrasa and university. Some even mistook him for a Shia regardless that he led and offered prayers as per the Hanafi school of thought.

Interestingly, he believed in Fiqah-e-Jafferia’s mode of divorce, believing that it cannot happen in one go, rather it will be done in a procedural way in the presence of witnesses, where both parties will have ample time to rethink and reconcile. Truly, he was beyond these labels and cannot be put in a box.

The humble man never let his students blindly tread on the heels of their teacher, rather inculcating the reading, listening, questioning and rationale based thinking. He bred free thinkers and intellectuals, not imperceptive followers. Infidelity or blasphemy are terms being abused by the clergy. He acclaimed that no living soul has the right to declare someone as infidel; only the all-powerful Allah and His prophet secured this right.

Even such opinion in itself is substantially blasphemous. When has the traditional society ever let the free thinkers grow? As if they are in opposition to Islam. People misconstrued his thirst for rational truth as the war against traditionalistic approach towards Islam. As a matter of fact, he himself used to say, ‘I am neither a reformist nor a traditionalist, rather a bridge connecting both, as both are inevitable and incomplete without each other’.

His love for Quran had no beginning, no end. Sorrow clenches my heart to say that he paid the price for it through his blood. His last words to Dr Tahir Masood, who was sitting right next to him in the car when a bullet hit his cerebellum piercing out through the left cheek, were, “My philosophy is always based on Quran and Ijtihad.”

His worldy designations, D.Litt, civil award or the state recognition are great but his religious philosophy in his dozen books and numerous articles, his fight for the Islamic reformations, his spirituality are greater, accepted by Allah in the form of his martyrdom.

He lies beneath the mud, sleeping in peace, devoid of all worldly affairs but his legacy shall continue through his devoted research work and reformations done in the love of Islam that will linger on forever.