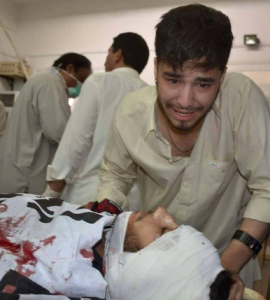 omewhat frustrating and very tedious when repeated lies by local takfiris are parroted verbatim by International Media. And that too by a respectable publication like Economist; and something exactly like that happened on the online article published under the title “Why sectarianism is gaining in Pakistan”. The piece supposedly written by a local Pakistani author whose name only appeared as an Initial, detailed the same tired boilerplate canard which seemingly has become the rule rather than exception.

LUBP as a blog has done so much in last 5 years to differentiate and delineate the Takfiri Deobandi from a peaceful Sunni Barelvi or even a moderate and honest Deobandi. But it seems like that out of laziness to do what they are supposedly paid to do; western media turns to same old cliched pieces written by local journalists. Its the rinse, repeat cycle which is so frustrating, especially when it comes from a respected publishing  house like the economist. And this piece does not bother to break the cycle either, and mixes facts sprinkled with usual falsehoods repeated by Takfiris on social media.

The biggest complain that can be raised over this very lazy article is its lack of specificity, by bundling all Sunnis under the banner of Takfiri terrorists, the author does great disservice to all peaceful Sunni Barelvis and Deobandis who in no way associate themselves with ASWJ/LEJ. If even for a second we take the false binary at its word, can the author explain the endless campaign of violence against Sunni Barelvis ? Or is it the Shias who should be blamed for Data Darbar bomb blast or the Nishtar Park Bomb Blast or for that matter all kind of attacks taking place against Sufi shrines.

To an uninformed reader, this piece being published in Economist lends false credibility to false Shia v Sunny Binary. Economist is expected to be better than this and should be better than this, its a shame how Takfiri narrative is being peddled as serious journalism. Whereas it should be challenged as lazy pseudo journalism which it really is. Please read this sub par piece and leave your feedback as to how you feel about it.