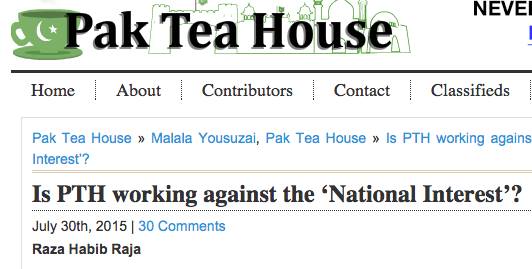 Many commentators were of the view that Raza Rumi – who happens to be chief editor of Pak Tea House (PTH)-is a coward and is trying to malign Pakistan in order to seek asylum in United States. Moreover, PTH is an anti Pakistan website with the agenda of presenting a negative image of Pakistan. Some commentators were angry that we only publish those articles which are critical of Muslims and in their opinion that showed our “Anti Islam” bias.

Likewise some called us traitors due to the fact that we have been critical of some of the actions of Pakistan Army. As one of the co-editors of PTH, I would like to take this opportunity to clarify certain things. I am indulging in this exercise mainly because although PTH has international readers also but our prime target is always Pakistanis and we want to engage them. I believe that mistrust with respect to our intentions would make it extremely difficult for us to convey our message effectively.

First of all, let me make it clear that PTH does not have any anti Pakistan agenda. Our sole agenda is a tolerant and liberal Pakistan which is devoid of religious extremism. We are dedicated to doing our bit for that. However, we believe that path towards doing that starts with the acknowledgement that perhaps there is something wrong with the way we approach religion, security policy and domestic politics.

Today Pakistan’s majority of problem are home grown. However, we have always tried to come up with weird conspiracy theories to shift the blame to outside forces. Even if foreign powers are involved, but the nature of the problem is still home grown. Foreign powers ( assuming if they are indeed involved) did not create Taliban but may have ended up using them. Taliban are the outcome of the way our Madrassa system is indoctrinating students and the way our own state tried to use them as “strategic assets’. This kind of policy has its blow back, a fact that was conveniently forgotten.

However, rather than acknowledging our mistakes, over the years we first tried to portray the atrocities by Taliban as some kind of reaction to USA’s war in Afghanistan. People like Imran Khan were at the forefront of that narrative. Eventually when the barbarity of Taliban reached such an enormous proportions, our national narrative has now changed to blaming India. If TTP are indeed Indian agents, then can anyone explain as to why Mr. Imran Khan was hell bent on giving apologetic defense for them? Or for that matter why at one point he was also in favor of giving them ministries?

In my opinion we often have this problem that rather than going to the source of the problem we start getting angry who point towards it. It is no wonder that Pakistanis hate Malala, a sixteen year old girl despite being shot in the face. Her crime: her ordeal was picked up by international press and highlighted the plight of ordinary Pakistani girls under Taliban. Many Pakistanis thought that West was deliberately using it as a reason to insult them and Islam. They took that as an insult and ended up hating and abusing a little girl. In fact on FB page of Imran Khan’s PTI, many of his supporters were openly abusing Malala when she got a Nobel prize.

Our opinion about TTP only changed on a massive scale after the Peshawar attack and that too after our media started to blame India! So Malala was hated for bring “bad name” to Pakistan whereas TTP was actually not loathed for a considerable period of time.

Likewise our integrity is also doubted because of our criticism of Pakistan army. Many think that since we are at times critical of army therefore we are anti Pakistan. I think one of the major problems is that in our collective psyche respect of army has become completely intertwined with patriotism. What people are completely forgetting that army is merely a part of state and it is NOT a holy cow. As an institution it should be held accountable just the way rest of the institutions are. Here you can literally abuse elected leaders but merely questioning army has assumed the status of a sin.

In a developing country like Pakistan, the reality is that army is calling shots in many areas but particularly security and foreign policies. Due to their heavy involvement, it is only natural that they should be questioned when things go wrong. Many of today’s militancy owes its existence to Pakistan’s security policy- a fact that cannot be just brushed aside – and therefore army cannot be simply excused from criticism. In any civilized society, army is under civilian control and is properly accountable. In our national narrative, being critical of army has become synonymous with high treason, truly sad state of the affair as it leads towards army becoming completely insulated from accountability.

Likewise, many commentators also blamed PTH for writing against Muslims or for that matter even Islam. Once again, I would like offer the same argument. The Islamic extremism in our midst is a fact and the entire world is not merely noticing it but also experiencing it. When PTH tries to be critical, it is not trying to show hatred for Muslims but merely trying to stress self-introspection . Unfortunately most of us get angry and rather than indulging in soul searching and hating those who are killing in the name of Islam end up hating the liberals like Raza Rumi.

Some Pakistanis commentators have called Raza Rumi as a coward Dollar khor or asylum seeker. I consider Raza Rumi to be my mentor and I have had the privilege to know him personally. That guy almost died for merely speaking against ongoing Shiite genocide and for suggesting that we need to reform our Madrassa system. And yet, he is being called a traitor and someone who is a sellout.

What exactly is patriotism here? Is being critical of our missteps treason? Do Pakistanis really think that Pakistan’s bad name is NOT caused by those who kill in the name of religion but by those liberals who point the obvious? Are my Pakistani brothers and sisters actually aware as to where exactly Pakistan stands in various global social, economic and political indicators? Are they aware that we are ranked among countries like Syria, Yemen, Afghanistan and several Central African dysfunctional states? Are they aware that Bangladesh ( formerly East Pakistan) is ahead of us in many indicators?

Pakistan’s problems can only be solved through candid discussion and frank acknowledgement. Calling liberals such as Raza Rumi as “Pseudo liberals” or worse sellouts won’t solve anything. They are NOT causing Pakistan a bad name but our own follies are.

PTH’s ultimate agenda is to make Pakistanis understand this.

Instead of bashing on Malik Ishaq’s killing, why can’t we just give the Army a break and believe its claims, for once? – by Umaima Ahmed
JC finds 2013 elections ‘fair and in accordance with law’